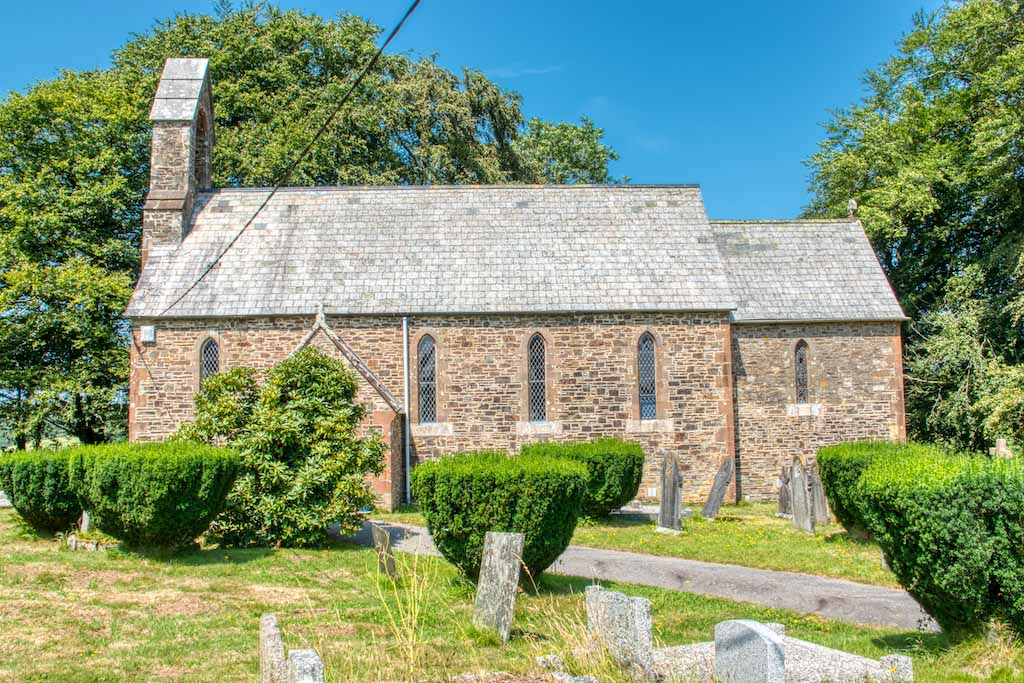 Country, deep country quiet, forgotten Devon, where folks live side by side with deer and fox, treecreeper and sparrow hawk, violet and marsh orchid, as they have for thousands of years.

It is a tiny parish, a single Saxon manor called Tillislow which was in the bottom twenty per cent of estate sizes in the Domesday book; the farm still exists, a cluster of buildings linked to the church by a footpath across the lush fields.

There is a surprise here; the church is not next to the manor, which we would expect for a Saxon or later foundation. Instead it is at the top of a hill, on the road coming up from an old ford over the River Carey, an ancient track connecting Devon and Cornwall; a place of solace for travellers, a very traditional position for a church in the Celtic tradition, alive and well hereabouts before Anglo-Saxon culture.

That is not to say that Tillislow did not have its own little chapel at one point; there are two fields near the farmhouse called Big Chapel field and Chapel field; when this one dates from is not clear, but along with, or soon after, the beginning of the Saxon estate would be par for the course.

There is a field near the church called Churchtown – ‘the place where the church is’ – a name still used for the area.

And there is another surprise; Virginstowe is not from the Virgin Mary, but from St Brigid the Virgin, one of the patron saints of Ireland; St. Brigid the Virgin’s place, as it means. And this dedication is recorded in the late Middle Ages; it seems to be the original one. Interestingly, only 10 miles East there is another church dedicated to St Brigid at Bridestowe, and that dedication is attested as far back as 1160.

The church itself is a new build Victorian, but there is still a Norman font, so it likely goes back at least that far, and with it dedicated to a Celtic saint and all, then it quite reasonably wanders way, way back to the post-Roman days.

A time when Celtic speaking priests, Cornish, Irish, Welsh, sailed the oceans and sought out the lonely places, founding little chapels where they hung out their shingle and cared for the souls around… including offering rest for travellers who, say, were travelling up and down a track to and from a river ford.

And ever since, the parish folk, the wildlife, the countryside, have lived with Brigid’s love…and the travellers too, you and me…

Virginstowe Church on the outside 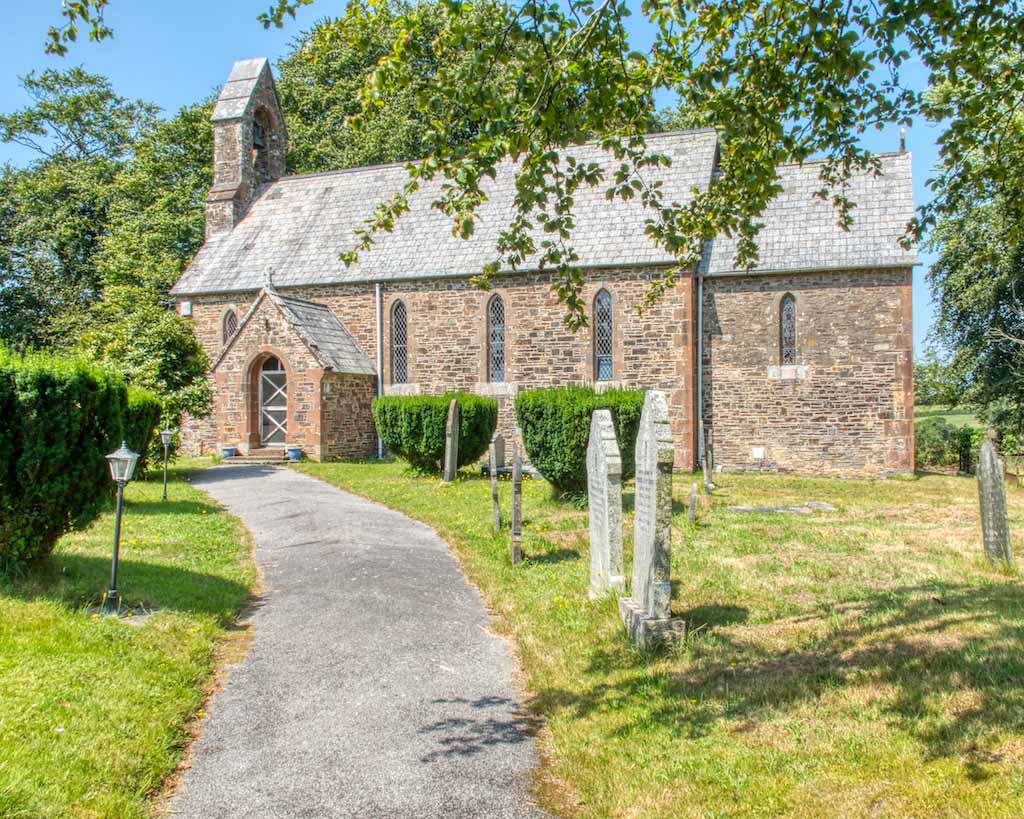 Virginstowe church in Devon, built in 1851 to replace an older one.

I fell in love here for the very first time… ah, sweet youth, how I miss you.

Admittedly it was my first love of a new build petite Victorian Church, but at my age I take all the memories I can…

I thought, ‘thirty minutes, that is all I need’, and ninety minutes later I was still there, heart lost, charm entranced.

It was the first time I had visited such a simple Victorian church, rectangular, no tower, very plain and I came to it full of what a church should and could be, grand Victorian fripperies or Medieval wonders…what was I doing here…?

I walked around it with growing appreciation, entered, fell head over heels, big grin and all… It’s easy to say what it is not; it has no frilleries, no grand carvings, no screens, no old benches, no granite…

What it does have is everything else… 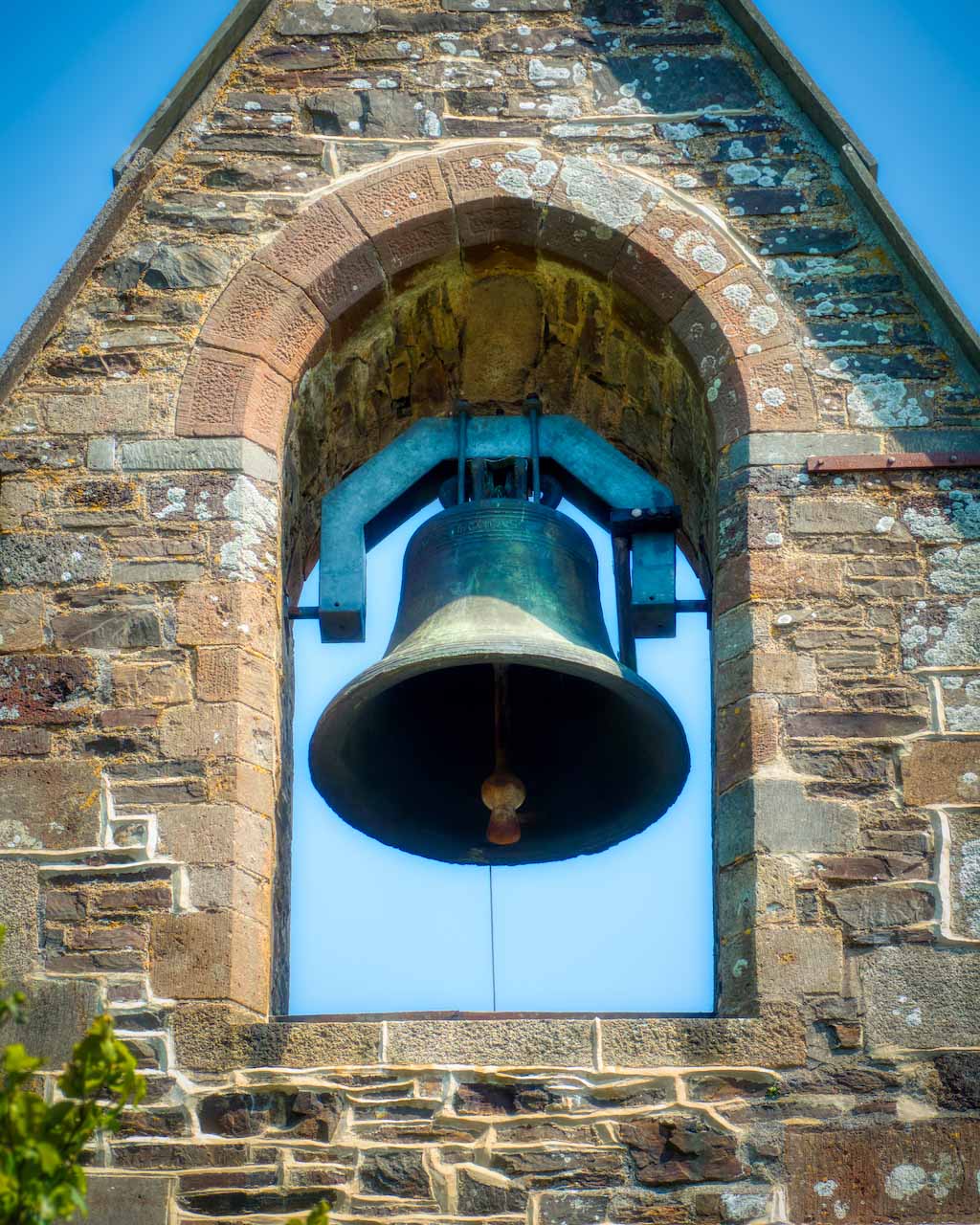 The bellcote of Virginstowe St Brigid’s in Devon; unusually it does not have a tower, just this bell surrounded by gorgeous stonework.

Even ageing ghosts who recognise the bellcote; before towers came these were, a single bell tolling the folk into church in the midst of this glorious landscape.

Virginstowe Church on the inside 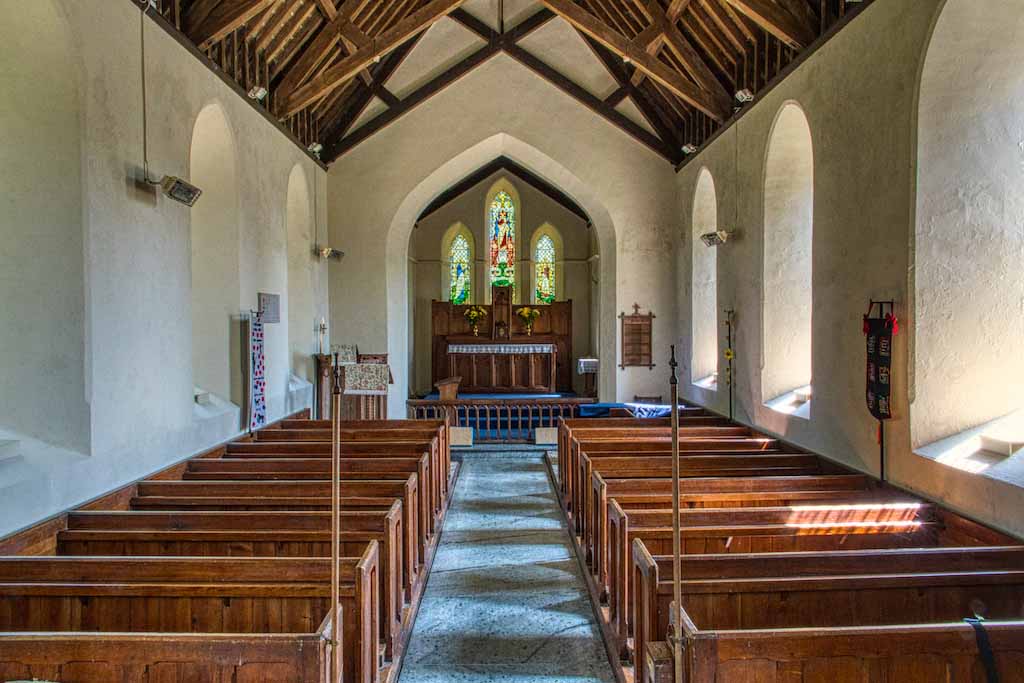 Inside fits the little parish perfectly too, a wayfarers chapel always open to show another path, the path of Christ, a silence to hear our own heart emerging blinking from the noise and clatter of the everyday, delighted by the shades of white and brown, by the exceptional textures of the ordinary…

The Reverend Cann built this in 1851 to replace a medieval church, ‘a small ancient dilapidated structure’, as well as a new rectory. He came to look after the parish, left derelict for many a year; in the eighteenth century it never had a live-in rector, it was served by curates from adjoining parishes.

The rectory had been allowed to drop into ruin as well, and the money was little. The Reverend Spettigue in 1779 wrote that he did not live in the parish because of ‘the smallness of the living’, which was an interesting reinterpretation of Jesus’s views on poverty and wealth if nothing else.

But for Cann, it was not just about a church building, it was about a bright new Christianity, opening up the churches without regard for wealth or social class, a new liturgy, a renewal of ritual with the mass taking centre stage again after 300 years, a movement that was sweeping the country and that the Exeter Diocese was in the forefront of.

But there is more. By 1857 there was a Parochial School entirely supported by the rector, attended by about 36 pupils. The first opportunity for schooling ever for most folk. Since the standing stones were erected. Since hunter gatherers roamed these hills.

I think I like the Reverend Ponsford Cann. Bigly.

Reckon Christ would high five the dude too. 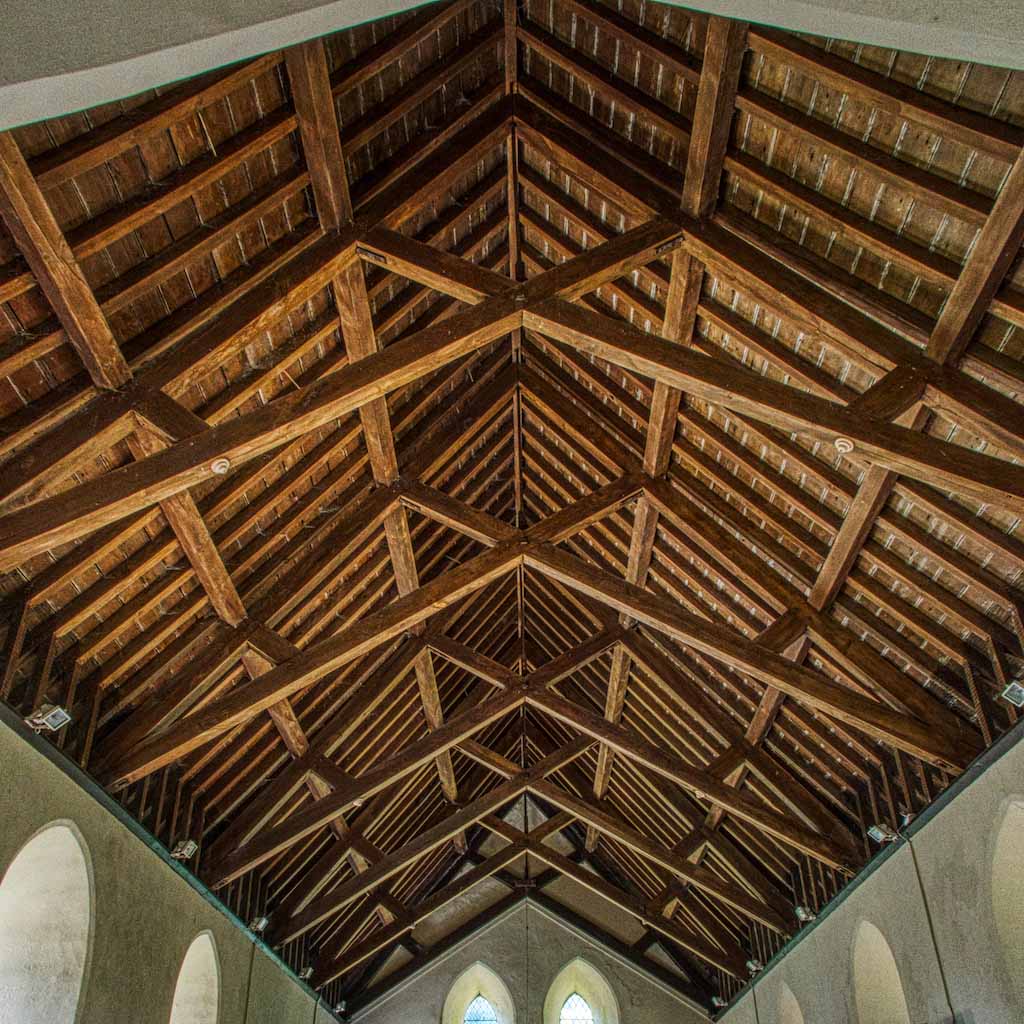 A cracking roof into the bargain, called a scissor-braced truss roof because those diagonal things look like scissors. Ely Cathedral has a similar roof too, from the fourteenth century though it was boarded over in the nineteenth.

Roofs are always a challenge in churches, having to cover a wide span without any internal load bearing walls. The trusses, which are the two pieces of wood forming a triangle going to the top of the roof, have a lot of weight pressing down on them and always want to push outwards, taking the walls with them, as well as dropping the roof into the nave. Not popular.

So these scissors braces hold them tight, as it were, and prevent them spreading out, allowing the nave to be spanned safely. An elegant solution. 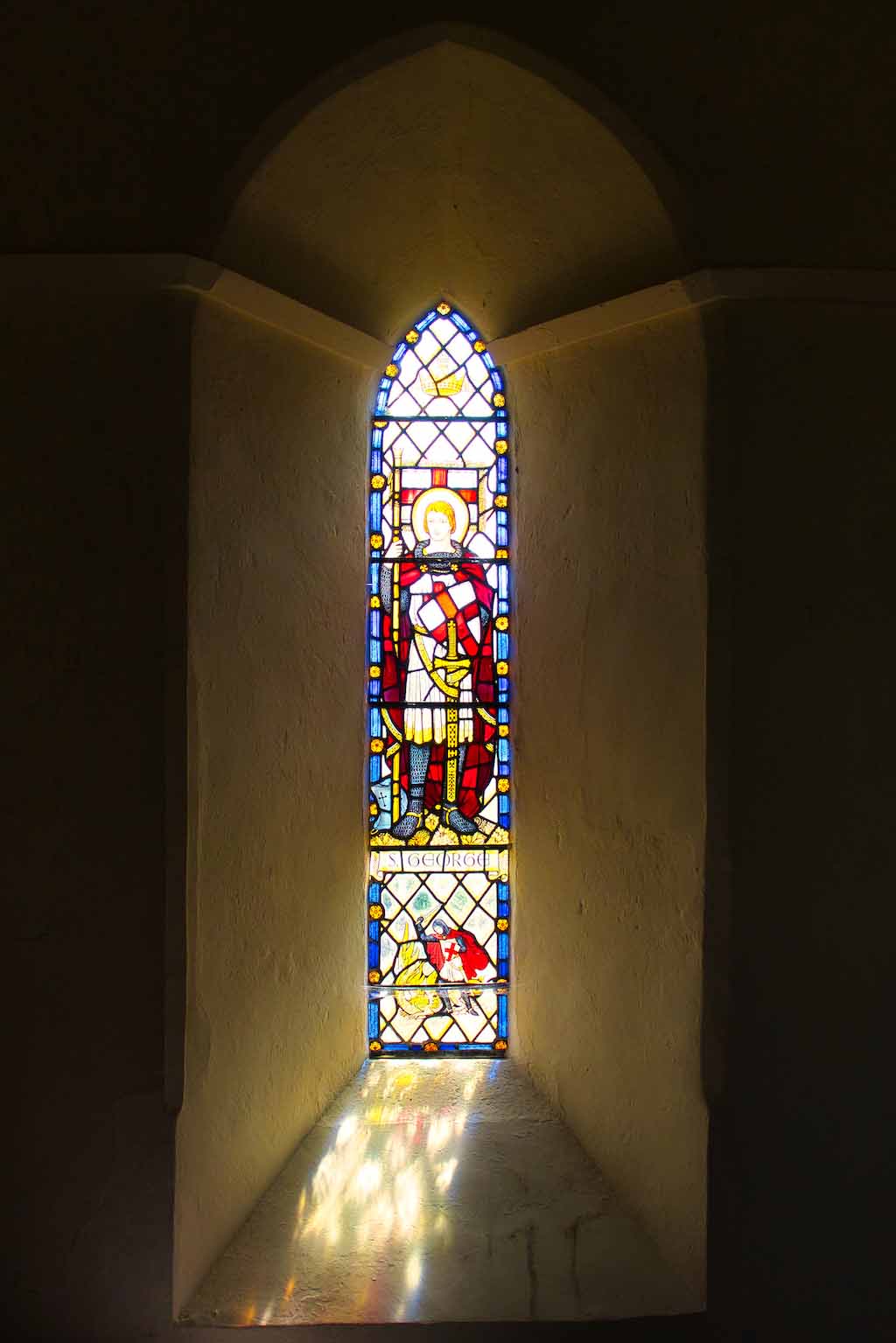 Light frolicking through a stained glass window of St George.

Being such a modest white church, colour when it comes is an extra delight, especially with this playful sunlight highlighting every niche and bump and turning them into a brand new landscape. 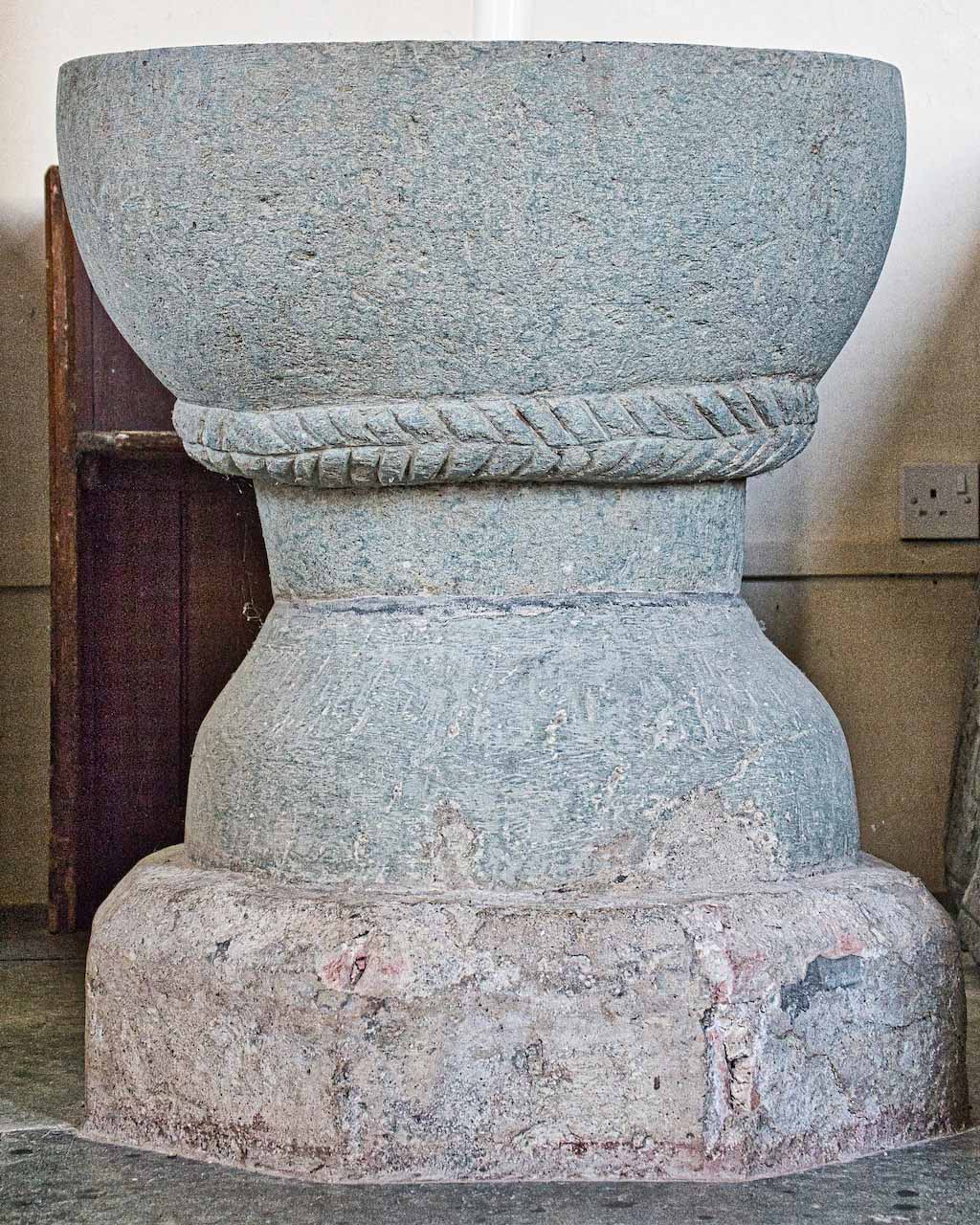 The very rural Norman font carved from local stone; generations on generations have been baptised here.

The Norman font is a plain little thing, like a giant’s chalice, its size reminds us of time before when baptism was full immersion. Beautifully textured too. 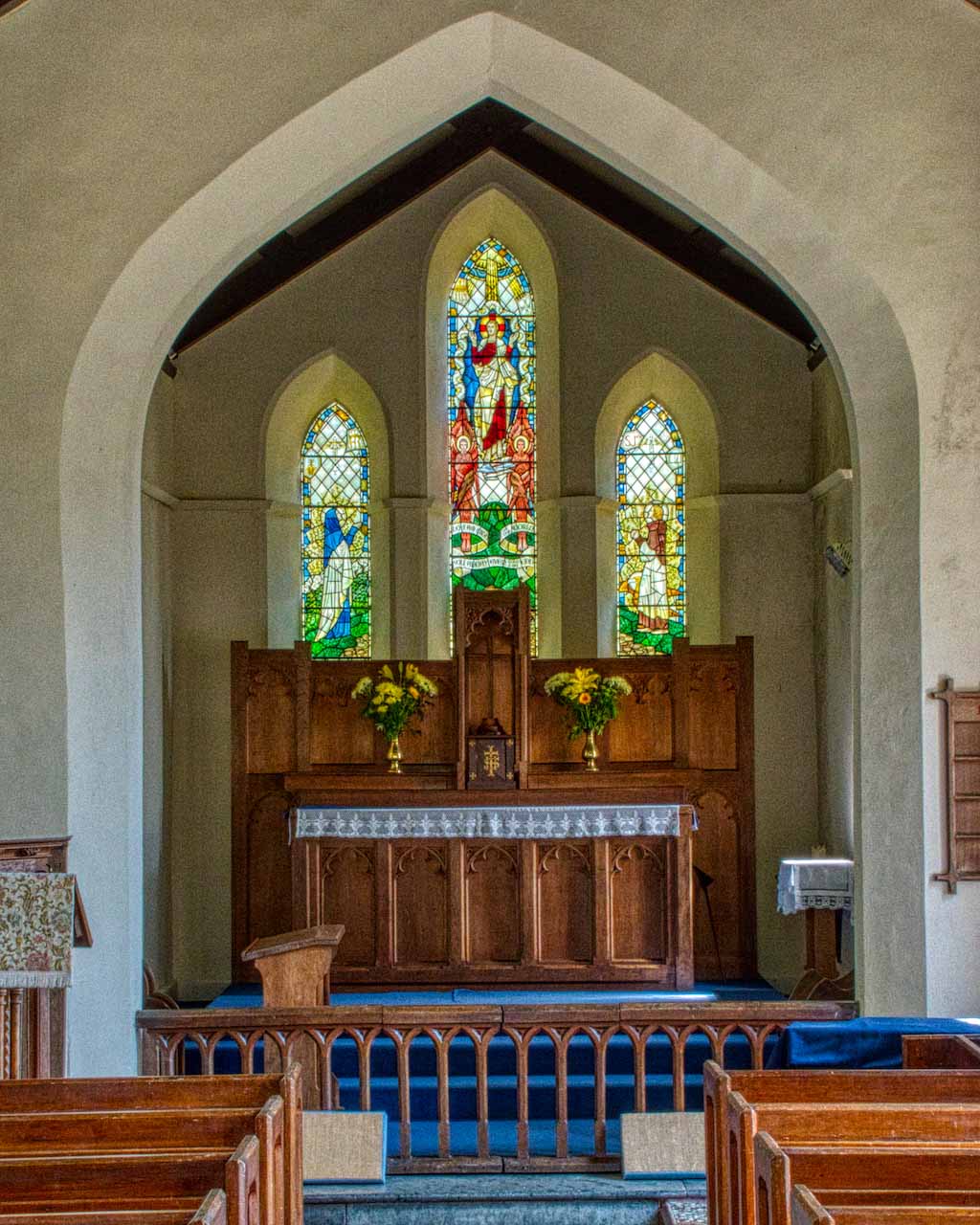 The raised chancel, the altar and the stained glass were created as part of the early 20th century renovations. Glass by George Cooper Abbs.

Here the chancel, the altar, and the stained glass stands out because it contrasts so much with the nave’s simplicity. Nice chancel arch, the way it follows the angle of the three lancet windows framing them just so. 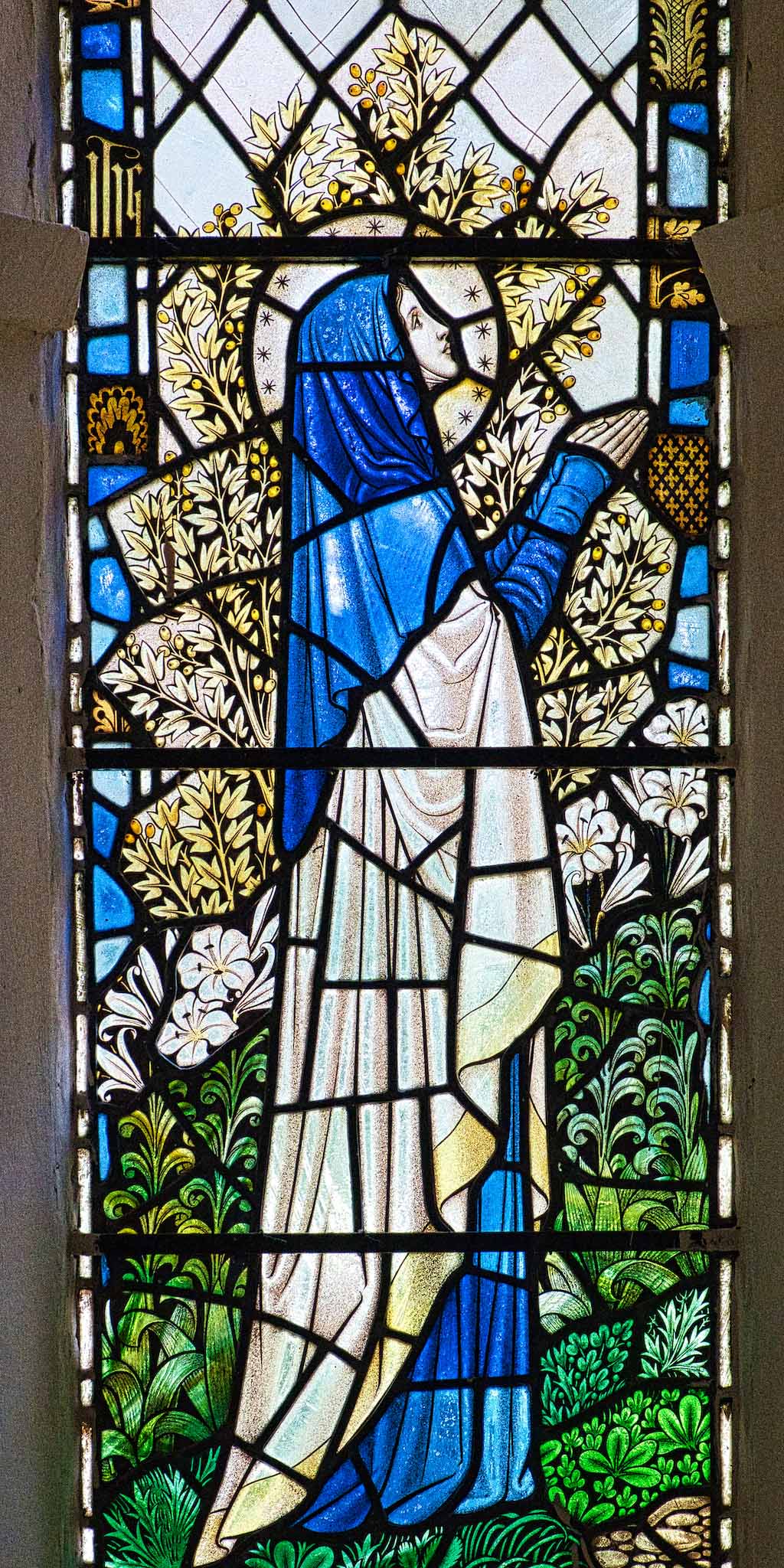 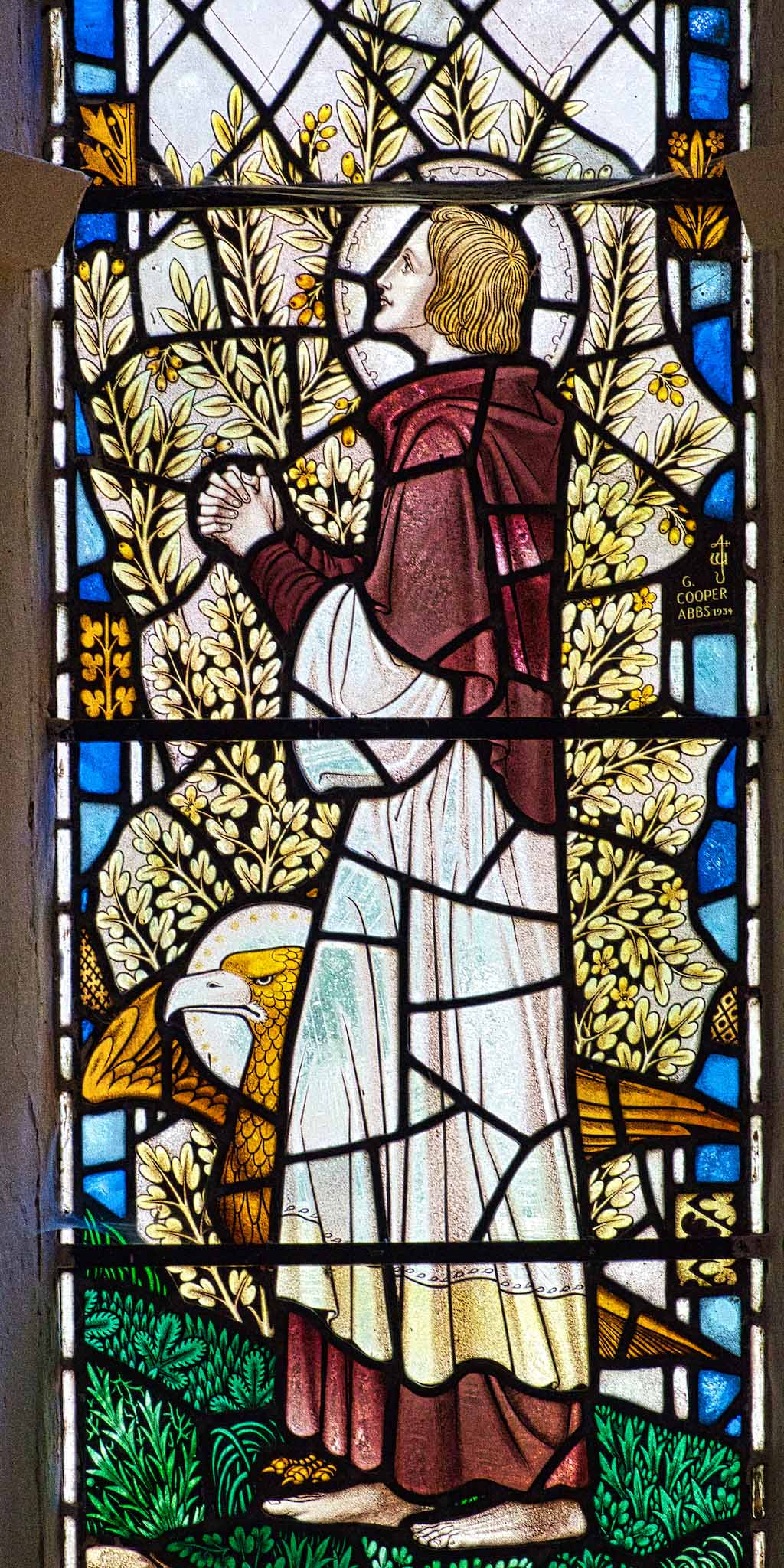 Here they are in closeup, a window very much of its time and all the better for it, probably dating from the 1920s, with an element of youth and contemporary fashion… most attractive, and that is not to mention the foliage. 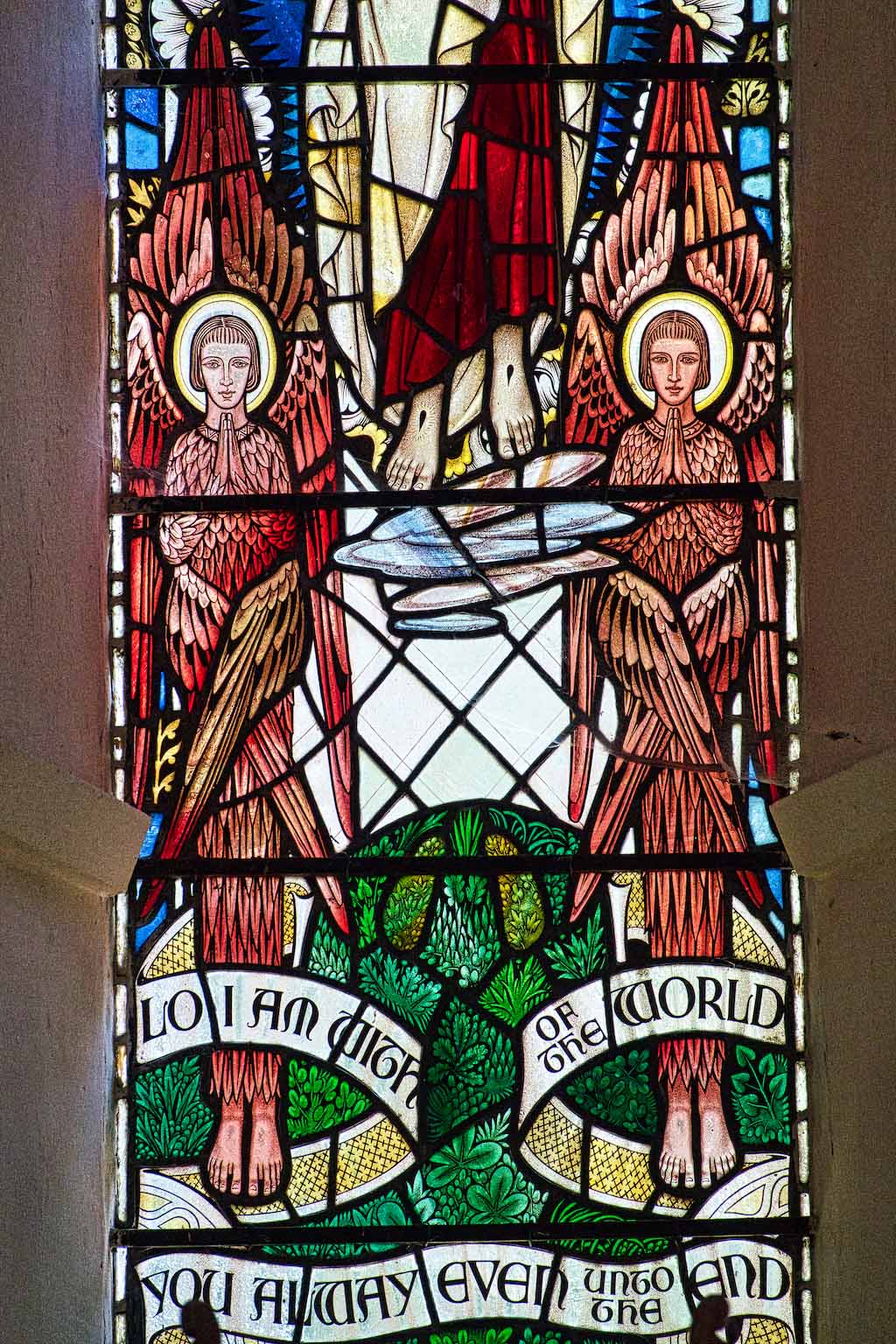 Fiery red Seraphim angels the foot of the cross in the East Window stained glass, by George Cooper Abbs

The Seraphim were the highest order of angels in Medieval theology, often coloured red as their name means ‘the burning ones’, their job was to glorify God and sing ‘Holy, Holy, Holy’ pretty well constantly. Or I guess just look good, as they do so well here.

So very chic these ones, too, very flapper style. Their hairstyle is the Bob, said to be inspired by Joan of Arc when it first shockingly appeared in 1909 or thereabouts. In Paris, unsurprisingly. Den of iniquity that place. Well worth a closer inspection… leaving tomorrow… pure research, of course…

Up until then women’s hair was always long, with mighty few exceptions, and the Bob was as shocking as long hair on males was in the 1960s. By the 1920s it had started to become fashionable, symbolising the changing times and the greater freedom of women, but how it was received down here, on angels, I wonder…

Though to be honest the womenfolk probably looked at it with glee, and the men probably grumbled at modern madness with a slight grin, and got back to discussing the drainage in Crowsnest meadow or the upcoming cattle market in Lifton. 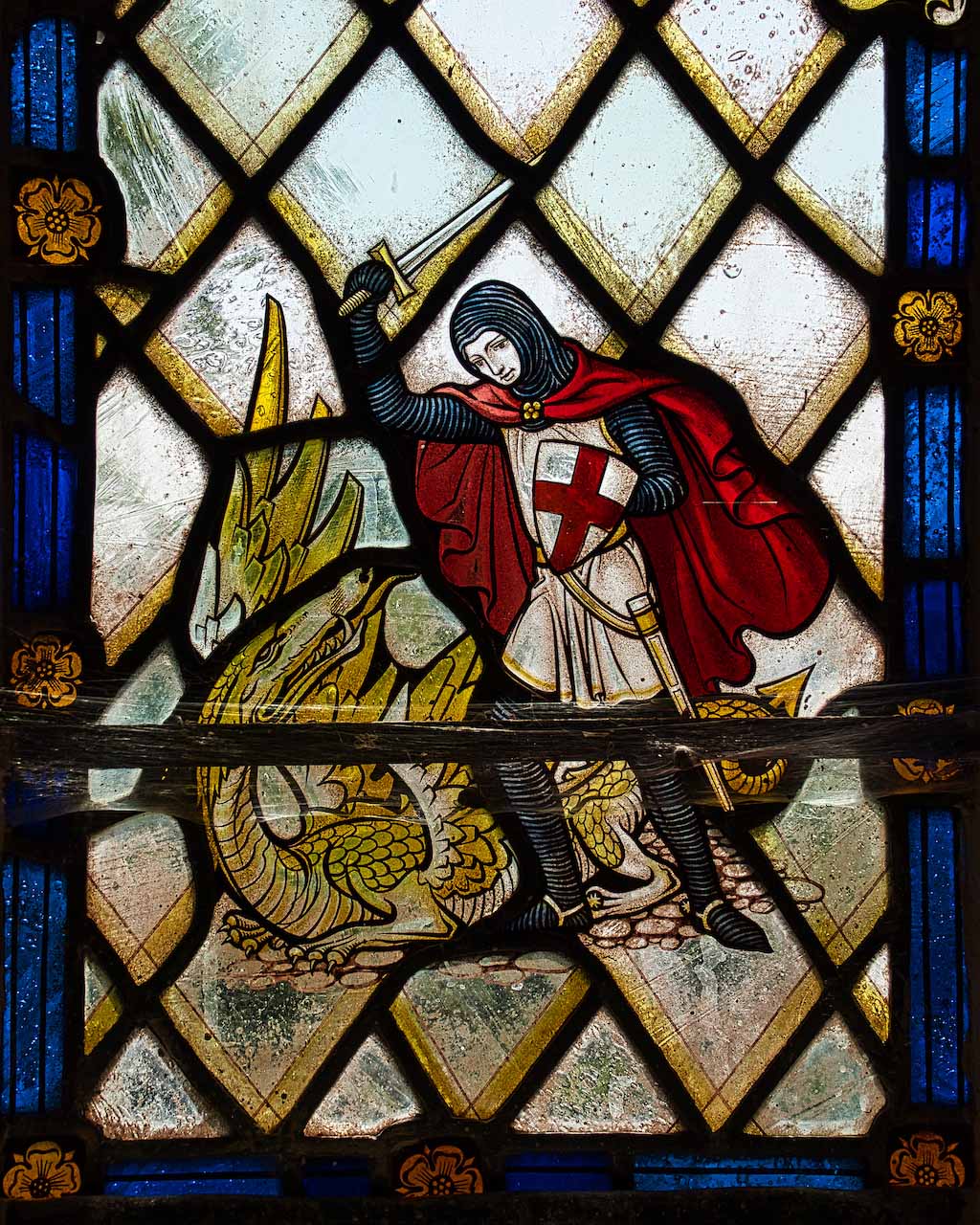 A delicate St George and the dragon, by George Cooper Abbs 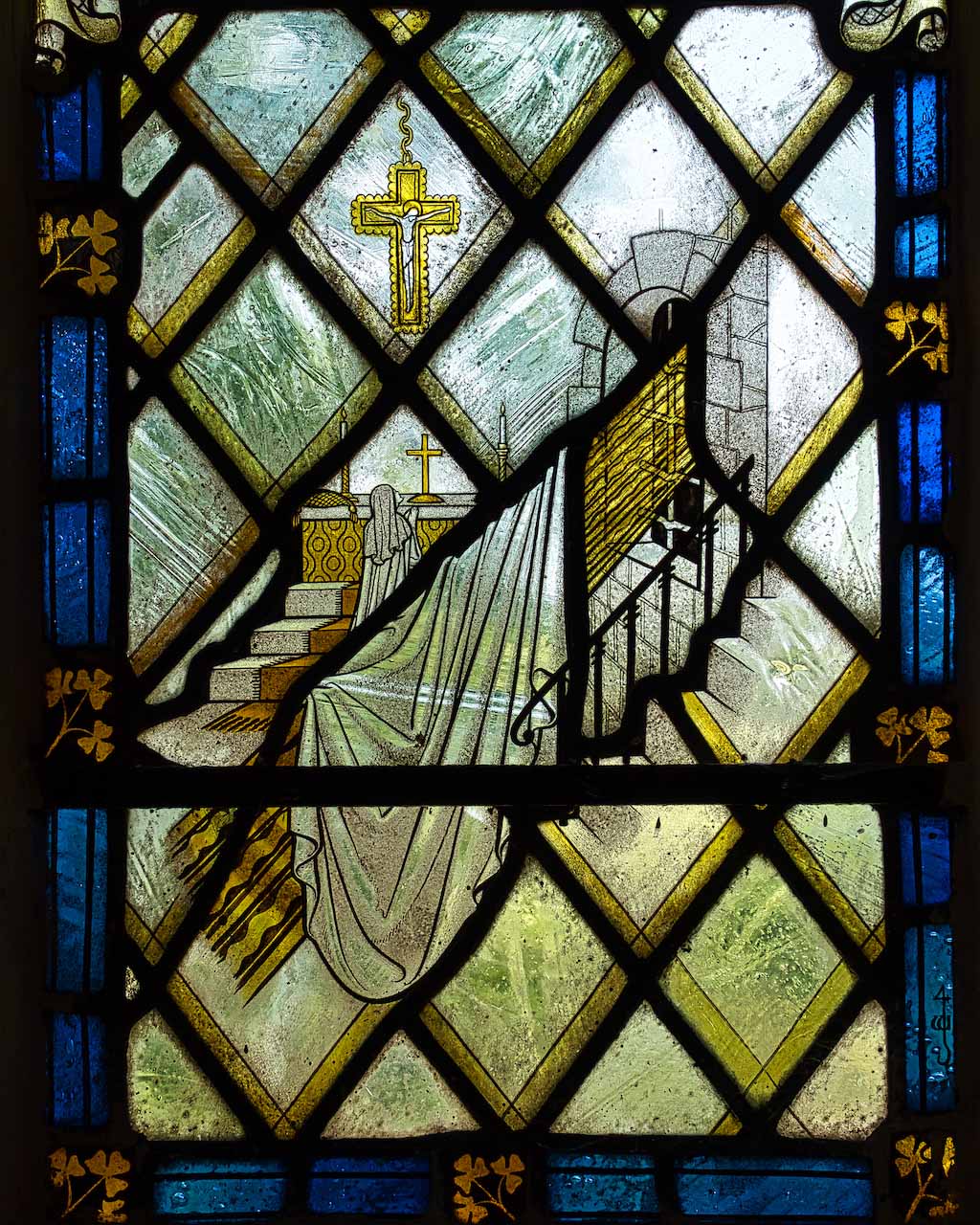 St Brigid hanging out her washing on a sunbeam, as one does, by George Cooper Abbs

At the bottom of the lancet windows on east side of the chancel are these delicate little bonnies, St George on one and St Brigid on the other. Sweet, especially with that textured glass.

Still, the question needs to asked, why is Brigid drying her clothes on a sunbeam? She is so not doing St George’s washing…

Saint Brigid’s life and the sunbeam 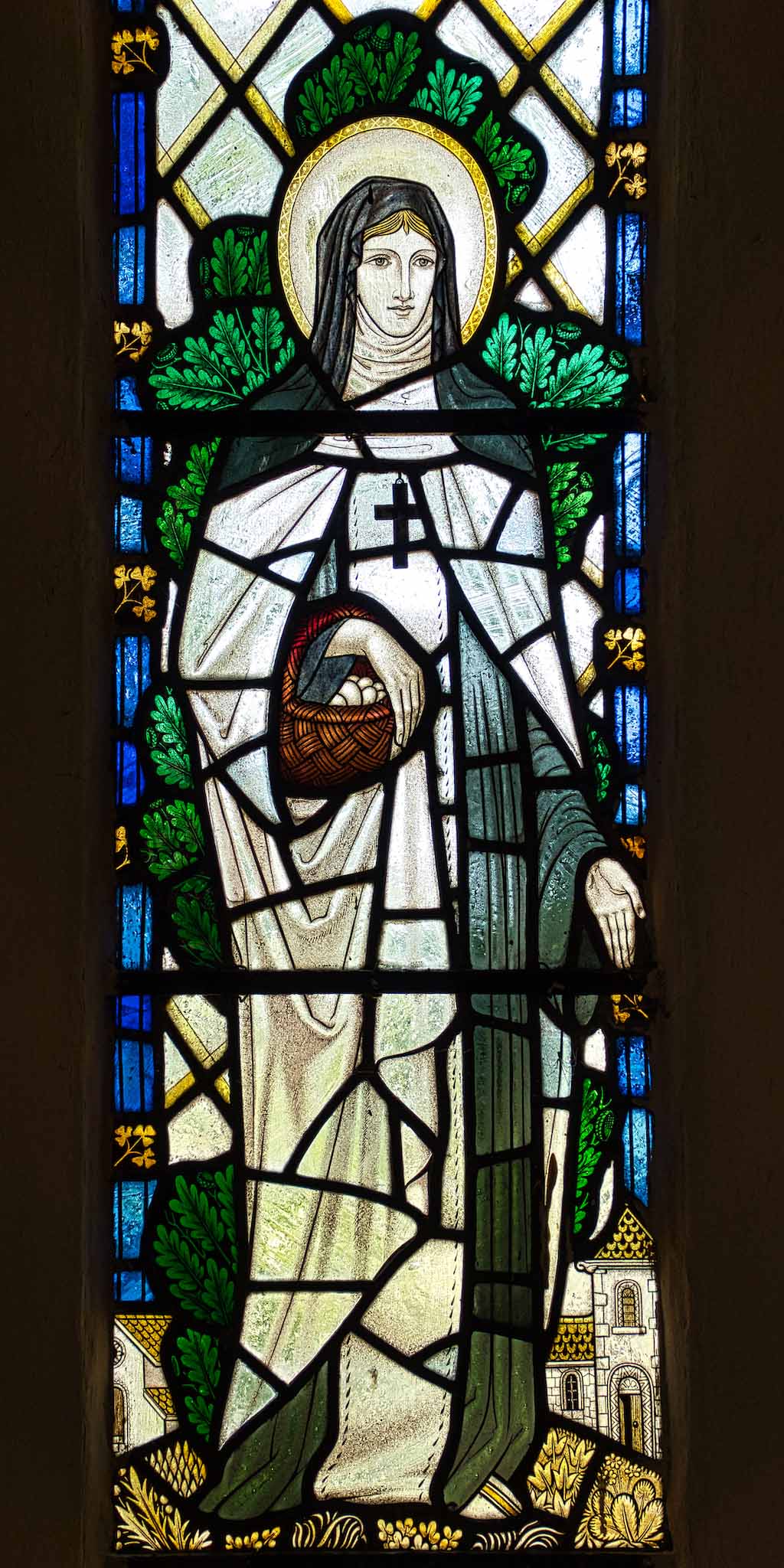 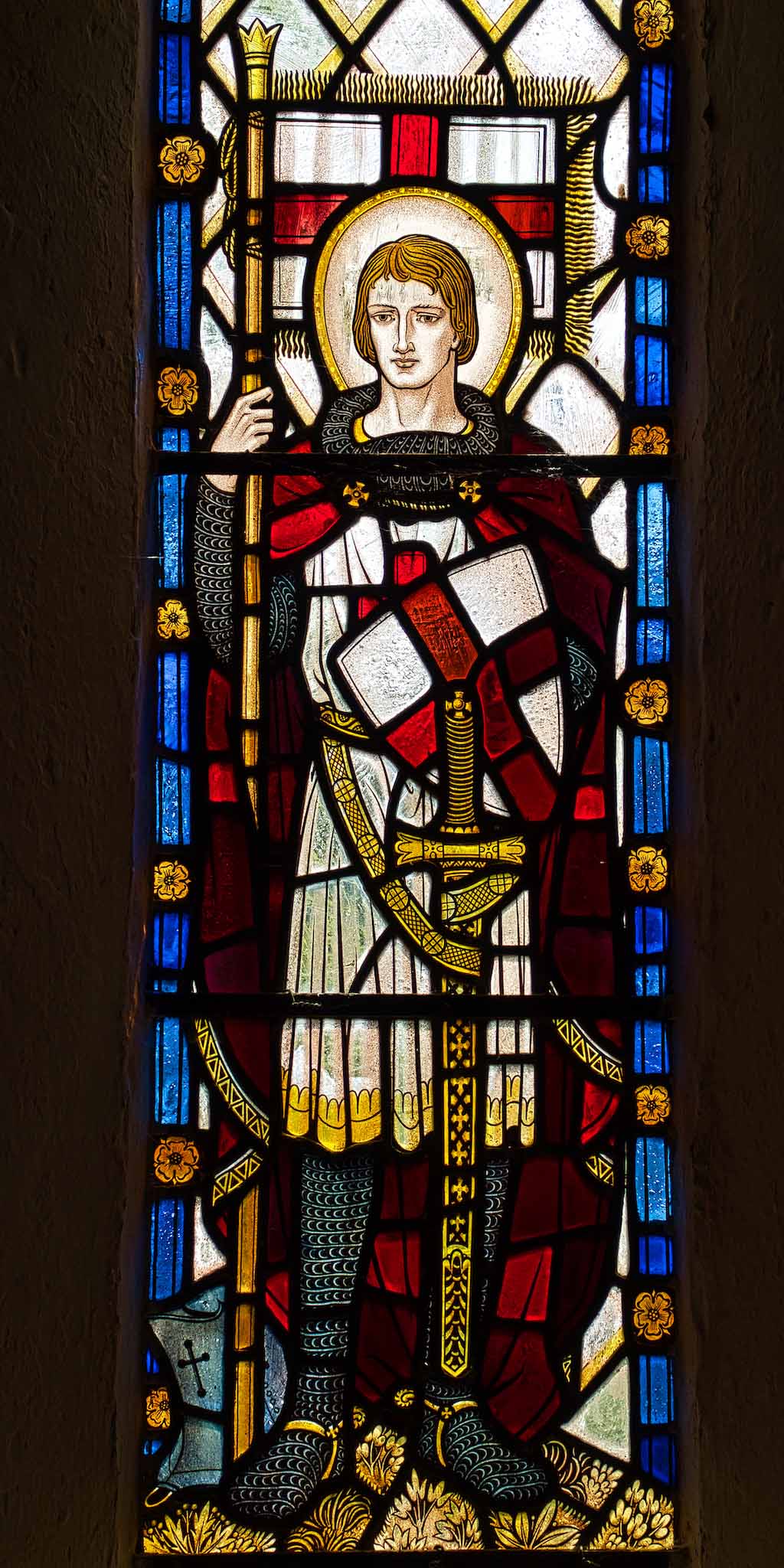 Well, here are the full-sized figures of the two suspects, St George with a very 1920s haircut indeed, and St Brigid…

Who was born around 450 AD in Ireland, probably the daughter of a slave, and is known as Mary of the Gael, or Our Lady of the Irish. She founded the first Monastery of Kildare and also a school of art, metal work and illumination, dedicated her life to God as a nun and so has the moniker ‘the virgin’.

Fantastical stories float around her like multicoloured dragonflies, gleaming and glinting in radiant imagination… deep truth does not bow down to meticulous rationality.

St Broccan writes of her as a baby: ‘As Brigid lay sleeping, neighbours thought the house was ablaze with a flame that linked earth and heaven. But when they went to extinguish the fire they realised that it was the baby filled with the grace of the Holy Spirit’.

Her clothes drying technique? ‘She herded on a day of storm sheep amid a plain. She spread afterwards her hood in the house on a sunbeam’.

So much beauty in these simple lines.

Miracles flit around her, curing the sick, helping the poor, caring for animals… at the end St Ninnidh, on her deathbed, gave her last rites. Afterwards he had his right hand encased in metal so that it would never be defiled, and he became known as ‘Ninnidh of the Clean Hand’. 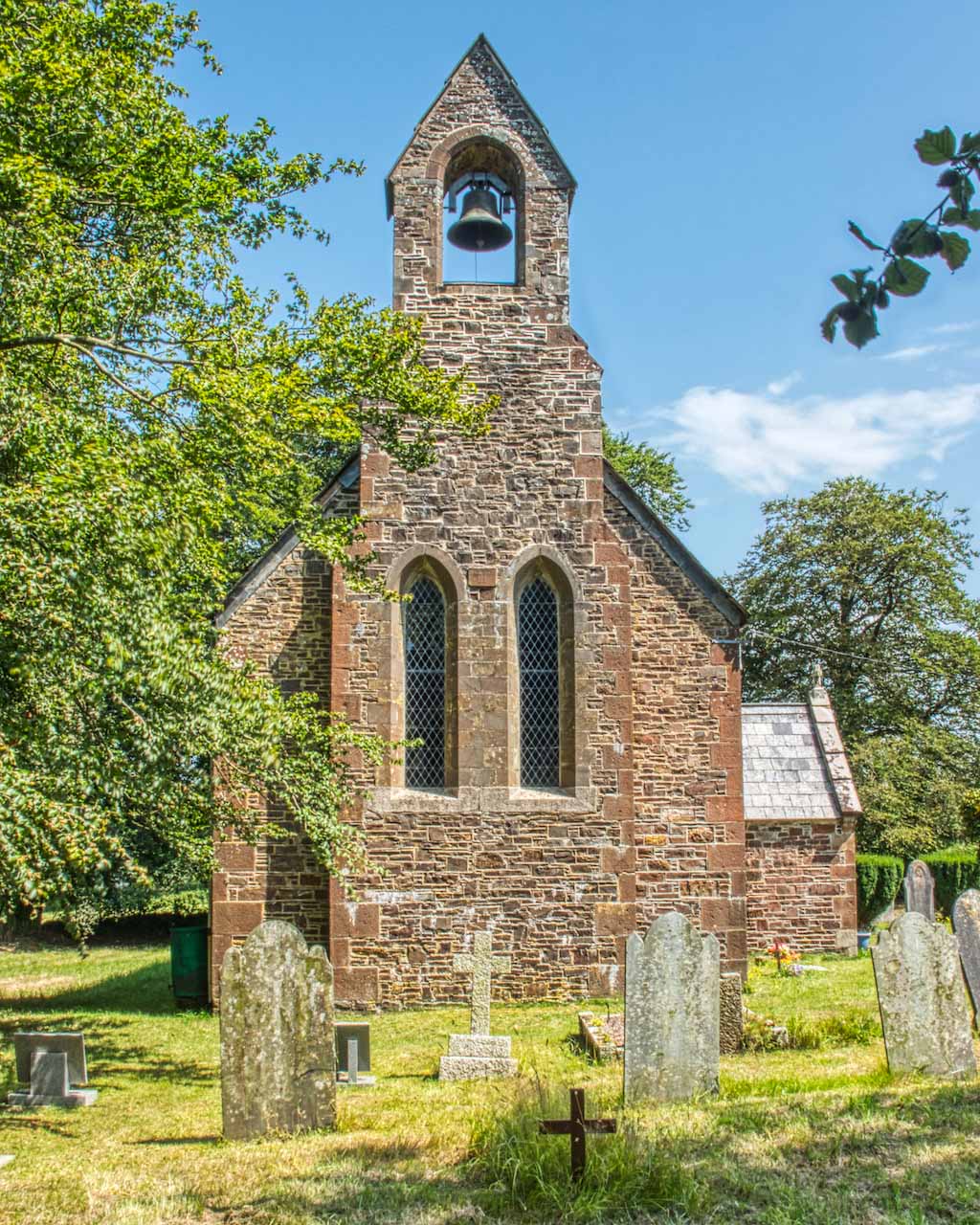 The west face of Virginstowe church in Devon with some lovely local stonework.

Leaving, a final look at the west end, with those exquisite reds and browns in the midst of countryside peace.

With St Brigid the Virgin, the Mary of the Gael, spreading her Irish cloak over her brethren in Devon who welcomed her priest so many centuries ago and dedicated this little parish to her…

Works for me, beautifully…