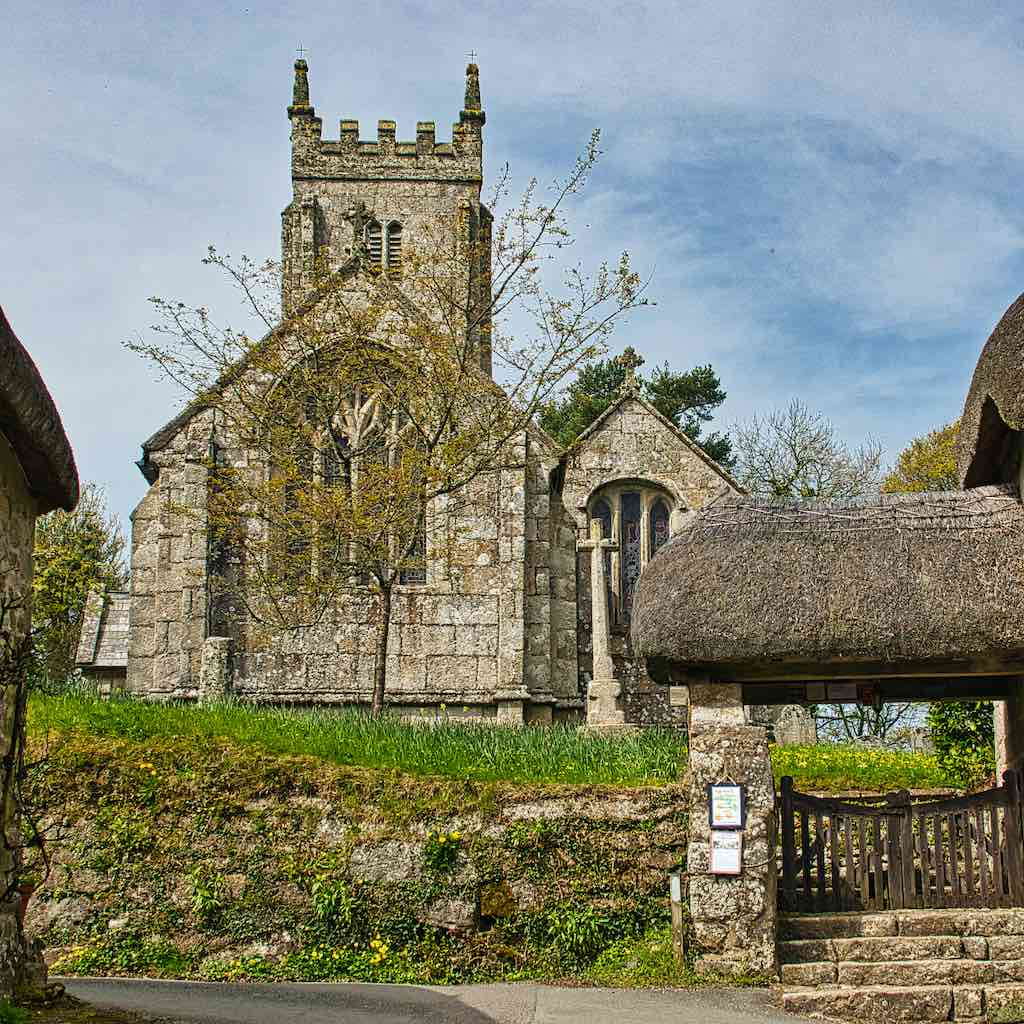 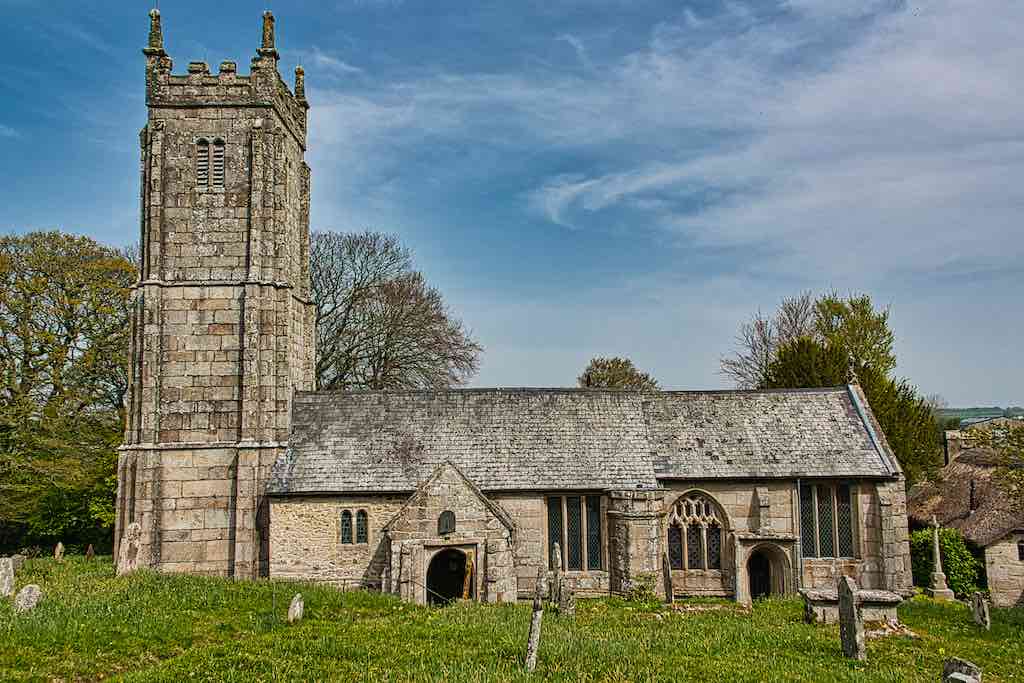 Breathe deep, the modern world vanishes, the living moors, fields, trees, skies, the cry and calls of birds and animals, and this ancient granite church, softly growing from the soil. Old windows, old doors, and for about seventy years until 1969 some very old forms of worship… but more of that later.

Throwleigh church has a stunning exterior, the weathered stone and the tall tower, and then there are the different perspectives from the hillside churchyard; looking down, a model, looking up, a mini-cathedral. This is one church that so repays a long inspection from every angle, there is so much to notice.

Like here, just one example, on the left of the porch, the stone is more higgledy-piggledy rather than the regular blocks elsewhere and with that little double-lancet window it is probably the earliest part of the church, maybe from the thirteenth century.

The rest of this side of the church is fifteenth century, and the other side sixteenth when they popped in the north aisle.

In your face, Game of Thrones, this is proper Grand Medieval, and still in regular use by the local folk.

But this is not a dating exercise, many a better folk than me can do that job, this is fun and joy, because just look; is not that just so dramatic? A statement for sure, and near all original. We are seeing it as it was meant to be seen, and boy does it rock the soul.

The granite door surround, the simple Perpendicular tracery, the string course (the protruding horizontal line of stone) taking that graceful leap over the window arch, the way the whole is framed by the buttresses and the way the same buttresses narrow up the top… delicious turned up to 11.

And then there is this priest’s door. Oooof. Breathless. And look, the outer courses, they are made from only four blocks of granite. Double oooof. And carving granite with medieval soft-metal hand tools… ! Triple oooof.

Probably the finest priest’s doorway in Devonshire; one would hardly expect in an out-of-the-way village to find such an excellent piece of architecture.
John Stabb – Some Early Devon Churches 1908-1916

It is deep, sticking out of the chancel wall, with arch moulding upon arch moulding narrowing into the actual door. A touch Doctor Who-ish but so much better.

Then there is the combination of sturdy stone and delicate design; this is not just about the surface carving, it is also about the massiveness of the big granite blocks.

By now we know that some serious moolah was doshed on this rock princess, and the inside is not going to disappoint; initially it is very clean and simple, renovated the middle of last century, modest nave and chancel, but it is the details that sing to us…

Remains of the old roodscreen

Bits of the old rood screen have been preserved at the entrance to the chancel, and the repairs are in a different colour wood as is best practise.

Those carvings though, they are Medieval through and through. The leaves are surprisingly realistic for the date, 1544, and I would bet this is by a local joiner working alone. Usually by now they would have been far more stylised.

All the better for it too, they seem real leaves, the creator choosing their models from the surrounding trees and bringing them back to his workshop to be preserved for the likes of us to gaze in awe so many centuries later…

A jigsaw of old benchends make up the pulpit.

The pulpit is put together from medieval benchends, a mish-mash when seen from afar but approach close and they start to dance. Look at the detail when zoomed in, with the simple lines and punch marks all designed to catch the light and bring out the depth of the carving.

Looking up, a couple of very nice indeed roofbosses, the Three Hares on the left and a ‘Green Man’ on the right.

The Three Hares symbol, all three sharing only three ears, seems to have originated in China around 600 AD and been adopted by many a culture along the Silk Roads to Europe, reaching Germany by 1224 and abut a hundred years later they appear in a book owned by a Bishop of Exeter.

Dartmoor has the biggest concentration of the Three Hares roof bosses in the country, at least sixteen churches having one or more.

Back in the day, every animal had a meaning, being created by God and all, and in a thirteenth century poem called ‘the Names of the Hare’ a sample verse goes

The gobshite, the gum-sucker,
the scare-the-man, the faith-breaker,
the snuff-the-ground, the baldy skull,
(his chief name is scoundrel.)
Translated from Middle English by Seamus Heaney

Which kind of indicates the hare might not have had the best reputation.

More so, one likelihood (and we are talking likelihoods) is that the image here represents the three main temptations that lead us away from the Divine: the flesh, the world and the Devil

And up in the roof, where the congregation could see and ponder, it suggests the self-question: ‘What, me?! Well, now that you mention it… ’

Whilst the so called ‘Green Man’ looks more like a corpse biting a shroud, even if the shroud looks like foliage, and here next to the Three Hares, might well carry the meaning of

The two together making a little sermon in wood and (now lost) paint.

Madonna and Child by Herbert Read

Two statues in the nave, a Madonna and Child by Herbert Read of Exeter and a Sacred Heart of Jesus from Belgium give a clue as to what was going on here from 1895 to 1966. It really was most unusual for a little moorland parish.

The Rev Gambier Lowe (1895-1933) and the Rev Herbert Drew (1933-1966) were both strong Anglo-Catholics and Lowe turned the parish into a very distinct place. Anglo-Catholics reckoned that the Church of England was not Protestant, but a branch of the historic Catholic Church, along with the Roman Catholic Church and the Eastern Orthodox churches.

This led to all sorts of hoohah in their churches; incense, confession, anointment of the sick, lots of candles (well, I can get behind this one, but only because I like pretty lights. And shallow), and a certainty that Christ is actually in the Eucharist, amongst others.

They still believe the Pope is a bit of a wrong’un, but that did not help the villagers get over the shock of the vicar’s new ways. Lowe built a new row of houses for retirees who formed most of his congregation and the locals tended to sidle off to neighbouring parishes.

Then along came Read, who was an Anglo-Papalist, the folk who think the Pope is your top man even though they stick around in the Church of England.

Confused? Imagine what the locals thought. It must have been as if their parish was taken over by the shock troops of weirdness, when all they wanted to do is get on with communing with the God of their ancestors.

Which they did. Elsewhere.

Nina Somerset’s Stations of the Cross

But some good came from this rather sad invasion, the statues and a charming Stations of the Cross sequence, detailing Christ’s experiences on the day of his crucifixion, to be prayed and meditated on.

They are by Nina Somerset, a little-known artist from the south of England, and have an innocence and naivety that fits their time, the 1950s. Clean lines, muted colours, strong poses, they really are beauties.

Those details! The right hand one, for example, on the floor are the Crown of Thorns and the Three Crucifixion Nails, taken from Jesus’s corpse before it is wrapped in linen. Such an eye.

An Easter Sepulchre niche, in rocky shape after being moved over to the south side in the nineteenth century and then back to the north wall in 1939. It seems to have lost its columns which likely enough extended up either side, and the empty space where the modern plaque is now displayed probably either held a painting or more carving, but… it really is most delicious.

A wooden chest containing a cross and consecrated Eucharistic wafer was placed here on Good Friday to represent Christ’s burial. They were then taken out on Easter morning and were the main part of the Easter Procession, to celebrate his resurrection.

After these jollities, the congregation all received the Eucharist, the only time in the year that they did.

Granite, the bones of Old Dartmoor

But the chief power of this peach (apart from the religious angle, which is numero uno) is the granite, carved from the bones of the moor ready to receive the bones of Christ. And yes, I suspect this was by design; the massive difficulty of breaking and carving granite with the soft metal tools of the age could easily have been avoided by importing a few slabs of limestone.

Up here on the edge of the wilderness some Dartmoor churches are clearly built with not so much money, but Throwleigh church is a glorious creation costing a goodly amount. They had the cash to bring in different stone.

But no, granite for granite land, and this, I venture, is an intoxicating expression of that sentiment.

Saint Cecilia and her protective angel, by Ninian Comper.

There is another Ninian Comper window in the nave, a richly coloured depiction of St Cecilia, the patron saint of musicians and music… thus the organ.

Next to here is the angel who apparently guarded her virginity when she was married against her will and her husband… well, as husbands did…

But he was converted when he saw the angel and all was good, until she was martyred around 220 AD.

A real person with real faith she was, and the Church of Santa Cecilia in Trastevere in Rome was built over her house soon after her death.

It is a wondrous depiction of a very popular medieval saint; Comper can get carried away with grandiosity, but here not at all.

Sadly though, the window commemorates the death of Lowe’s twelve year old daughter in 1912, named Cicely after the saint. And with that knowledge the window shines forth with love and compassion, Cecilia’s face and the angel’s presence for both Cicely and Cecilia. Let us hope it brought and still brings some healing to all who grieve a child.

A beautiful window to catch the morning sun.

In the north chapel is this Victorian wonder, colouring the morning light, with the Four Evangelists at each corner and scenes from Christ’s life, all surrounded by gorgeously intricate foliage.

Stained glass artists from that era created glass in this style so well, and this is a premier example.

Growing from the Dartmoor granite

The tower and its lichen, living in harmony

But always back to the granite for this House of Prayer. It is an astounding creation, nearly all the granite carefully shaped and jointed, for these blocks were not just laid on top of each other like bricks but needed stronger connections through various masonry joints, similar to carpentry.

Then the crown, the deeply impressive tall, graceful tower, growing organically out of the body of the building which itself could be an outcrop of the local stone.

Who can want more than that… ?