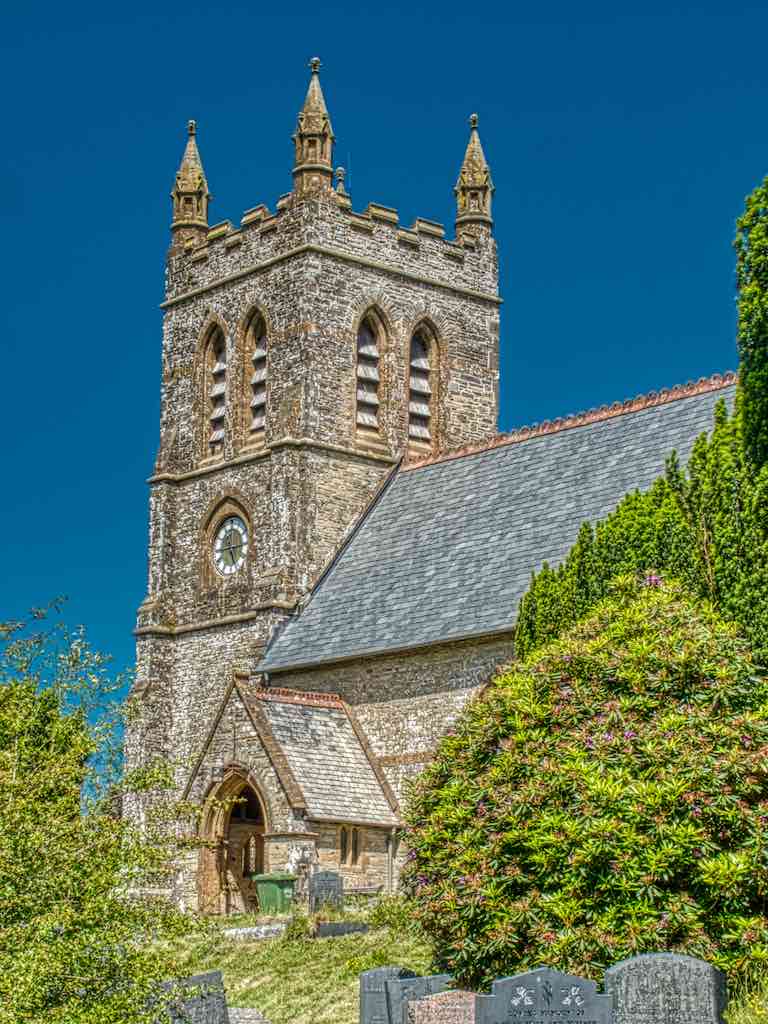 Tumbling down from the foothills of Exmoor, three streams pool their waters in Parracombe to take a stroll through one the most dramatic valleys on the north coast, Heddon’s Mouth Cleave, and meet the sea four miles away.

It is a charming location, surrounded by climbing hills and Parracombe Christ Church is one of two churches in this village (the other is Parracombe St Petrock’s). One is nationally famous for its eighteenth century rustic preservation.

This church is the other one.

But not visiting this church would be passing up the opportunity to spend time in a beautiful space, with well thought out proportions and some stunning stained glass. It is a little darling and, unlike its older sibling further up the hill, it is a working church. 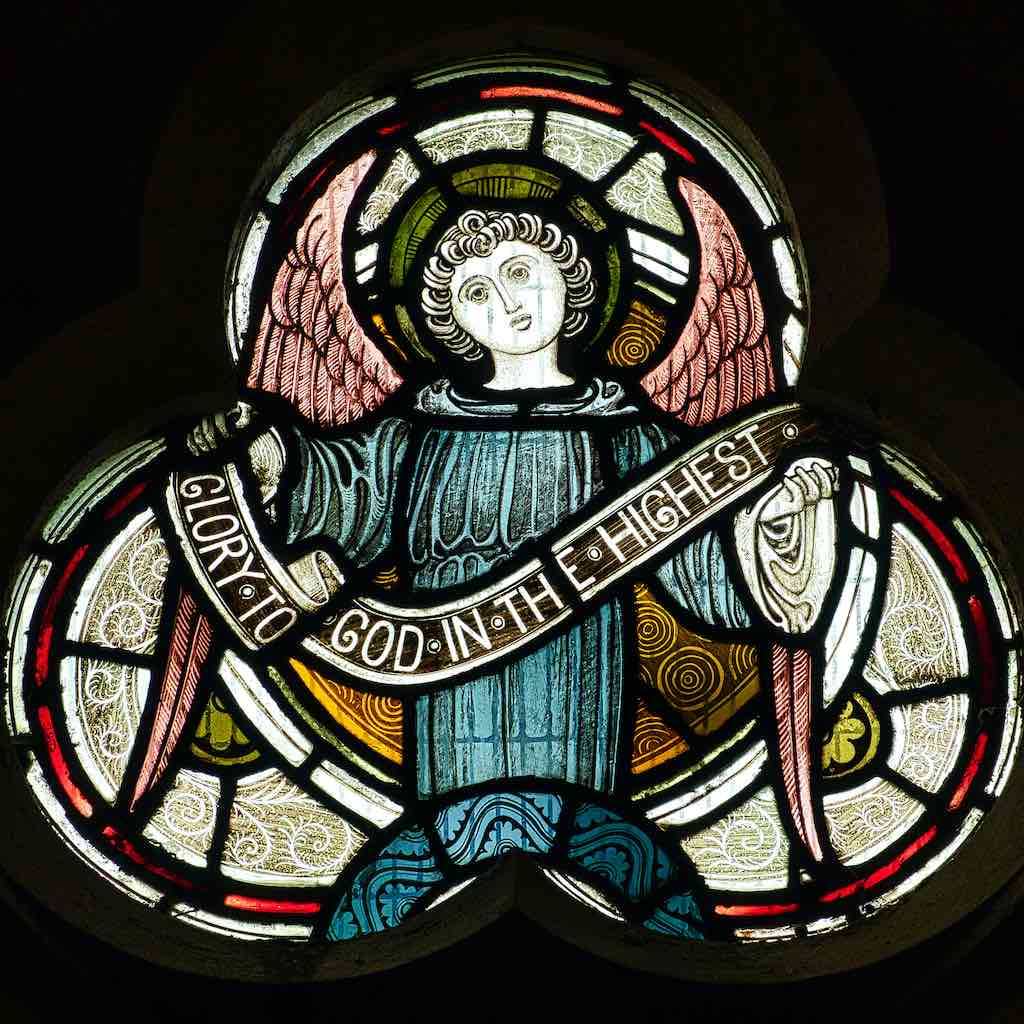 A new angel for a new church, by WF Dixon

Just over 140 years ago the villagers were hoping to knock down the old church and build something comfortable in its place, or at least clean the whole thing up so they did not freeze to death or get pneumonia form the winter damp. Really very reasonable.

The cognoscenti in London got to hear of this and were outraged (Londoners were very good at telling other folks what they needed to do. Maybe things have changed. I know not) and started raising money to preserve the old church, led by John Ruskin who was a very good Londoner.

Of course the brilliance of the villagers was awesome. ‘Give us a new church or the old church gets it’. And lo and behold, the village ended up with a nice new church, much nearer the village (have you tried walking a mile up a very steep muddy lane with the December rain pouring down your neck in your Sunday best?) plus money from tourists to the old church, and the Londoners patted each other on the back.

I suspect the villagers are still grinning. I know I would be.

Anyhow, this my story and I am sticking to it…

A lovely collection of angles, curves and straight lines with a good dollop of whimsy, just the job.

So a delightful church was built.

It is a well-proportioned Victorian church set on a hillside with beautiful views south, loved by the parish and anybody who has the joy of taking the time to really look. A well-designed piece of Neo-Gothic by a local Barnstaple architect, William Oliver in 1878.

The beautiful rural situation enhances all aspects, strengthened by the deep history of one of the best-preserved set of Norman castle earthworks in the country in easy sight just across the valley and with an information board in the churchyard.

As we can see, there is a respectable East Window, good stonework with age and lichen giving a lovely array of textures, and the strong string courses (the horizontal sticky outy things), the buttresses and deeply set windows giving a very attractive varying three dimensionality to the walls.

Grand whimsy, the pinnacles like look out towers connected by the false battlements, those double belfry openings, adorable

And then there is the tower, a bunny little thing, belichened, whimsical and hoppity all along.
Those belfry openings (the tall narrow openings) are big enough for the bells to ring out to heaven and those corner pinnacles… oh my heart. I expect an elf to be peering out of one at any moment. Or an angel. But I vote elf.

And the battlements, with their stone-ridged tops, are a nice touch. They give a much more up and down feel than if their tops were level. Likely enough a very practical response to the weather up there as well as good design.

The west side of the tower comes together neatly too, with a simple west window, and clock that is set into the face.

The main door to the church

We enter by a lovely Neo-gothic doorway and porch, bleached by the sunlight it catches so well, perched on a south facing hillside. Take a moment, if you will, to look at the landscape around. It is a grand vantage point and worth coming here for this alone.

The watercolour interior of Parracombe

Just this wash of muted colours with beautiful lines is enough to fall in love.

Suddenly the world is shut outside and we are in a clean, silent space, almost delicate in its limestone whiteness with verticals, horizontals, curves and touches of honey coloured Ham stone surrounding us like a delicate watercolour.

The sanctuary, where they have taken pains to decorate in muted yet rich colours, fits right in. Always tempting to go for colour, but the architect (and those who have come after) kept it a spot of subtle, rich simplicity even down to the more recent carpet.

The subtle altar back (reredos)

The altar back (reredos) with the Ten Commandments, the Lord’s Prayer and the Credo.

Even the reredos (the stonework behind the altar) is muted. The two blue-grey inner pillars make all the difference. They almost disappear into the lettering, yet still being a mild strength to the party, bringing attention to the beautiful curves of the three arches; note also how they are helped by the horizontal capitals that draw a line under the arches.

Imagine if the two central pillars (called colonettes) were white limestone, how that would weaken the three openings and make the lettering more important, and the arches less so; or if the inner pillars were removed leaving a sense of dangling to the arches.

But there is a bit more too. The double sedilia (seating for the priest and helper) has the same colonette design, to the same purpose, and it is by Harry Hems, who ran one of the top three carving workshops in the West Country. Nice.

This is elegant architecture that is not going to set the world alight but is… beautiful, that is the word, beautiful.

Alongside this the perspective of the benches adds depth to the design along with the deeply set window; the stonework’s texture offering additional depth and focus.

The shades of white and browns are clear, the silences and small sounds, the smells and the textures we will need to imagine. Churches are so multi-sensory.

And we can marvel at these pregnant verticals and revolving curves, the arches springing off to meet up in the heavens. The Japanese would say that the stonemason has just uncovered the form from the surrounding space, and I would not disagree.

And where else can we go for free to learn to look and enjoy this level of quality? To expand our horizons and drop our filters?

Light and tiles and shading make for wonderful companions.

One of the delights of wandering through a clean and delicate church such as this is that we might take the time to inspect the simple, to gaze again at those things we often pass by, such as… oh, the nineteenth century floor tiles, for example… and here they are.

So easy to ignore, we are so used to such a variety of floorings in this age, but back in the day these were state of the art, and they still look marvellous, unlike some modern examples after a few years.

Part of reason is because they are so cared for by the parishioners, many thanks to them, and part of the reason is that they are so worth caring for. A simple design, deep earth colours, a pattern not only of tiles but also the grouting (the thin white lines between the tiles) which brings another layer to the arrangement.

The wonder of the ordinary can seem a bit of a cliche, but it still hits the spot more often than not.

And here a nice rotund pulpit sits silently with more verticals and curves and even rosettes; rosettes saved from ordinariness by the curving petals, wonderful little details carefully created. Especially contrasted to the solid lancet openings strong enough to let the word of God thunder forth.

The green of life.

In truth, all the stained glass windows work well to complement the overall interior. This green Victorian glass is certainly not to be sneezed at.

The luminous green changes shades and intensity throughout the day and is redolent of nature, grass and woodland. It brings the outside in and reminds us that the church is not confined to this grace-filled place. It glows with the colour of life.

The sumptuous colours of this Adoration of the Shepherds and the stunning drapery are astounding. The details too. The little lamb asleep under Baby Jesus… So cute.

By WF Dixon who apparently

and (after recovering from this needless assault by multi-syllable words) looking at these Beardsley images I would not disagree. We can see similarities in the spikiness, the strong lines, the drape of the robes… not the same by any means, but a definite rhyme.

And that little angel strumming away, is this the angel of the Lord that came to the shepherds to announce the birth of Jesus?

Fear not: for, behold, I bring you good tidings of great joy, which shall be to all people…

Still looking after them, making sure they get home safely? Surely so.

What is more, joy of joys, there is a Resurrection window of Dixon’s which is just as good.

The seventh angel on the trumpet

This luscious little trumpeter, gleaming and glittering, grooves the swing at the top of that Resurrection window; just loving that one handed tooting as they start to raise the horn and funk it to the highest.

The seventh angel sounded his trumpet, and there were loud voices in heaven, which said:
The kingdom of the world has become
the kingdom of our Lord and of his Messiah,
and he will reign for ever and ever.
Revelations 11:15

Man, it is almost worth getting judged to jive to this daddy-o.

A stunning cockerel and fish

The detailing on these is outstanding.

Meanwhile, in another window, these magnificent creatures are remarkable in their style and subtle colouring; the cockerel with those shades of yellow and the fish with the greys.

There is no clear reason why these are here, though one venture would be that the rooster signifies St Peter, who denied Christ thrice then heard the cockerel crowing and was shamed.

The fish, though in a much simpler form, was used as a secret symbol by Christians from at least the second century when they were being heavily persecuted and killed for their religion. The Greek name for fish, ichthys, was used to represent the phrase the phrase ‘Iēsous Christos, Theou Yios, Sōtēr’ or ‘Jesus Christ, Son of God, [Our] Savior’.

This fish though looks more like supper than the traditional ‘ichthys’ symbol; the artistry is breathtaking.

The watercolour world of Parracombe again

Looking up the nave, such a subtle beauty.

This church truly is a watercolour.

Most folk visit the well-known and very awesome medieval church up the hill and fail to drop into this one. They are missing out. The understated wash of colour, the limestone architecture almost painted not built, and the stained glass delicacies make an exquisite contrast to the older church as well as a delight in itself.

Peace with a church window

Peaceful light to sit and breathe in.

And sprinkled with astonishing pools of charm and elegance, light bouncing, reflecting, entering, colouring, shading… ready to engulf us with peace and contemplation, entering a world of wonder and delight…

A world saturated by the Divine, whatever that means to each one of us.