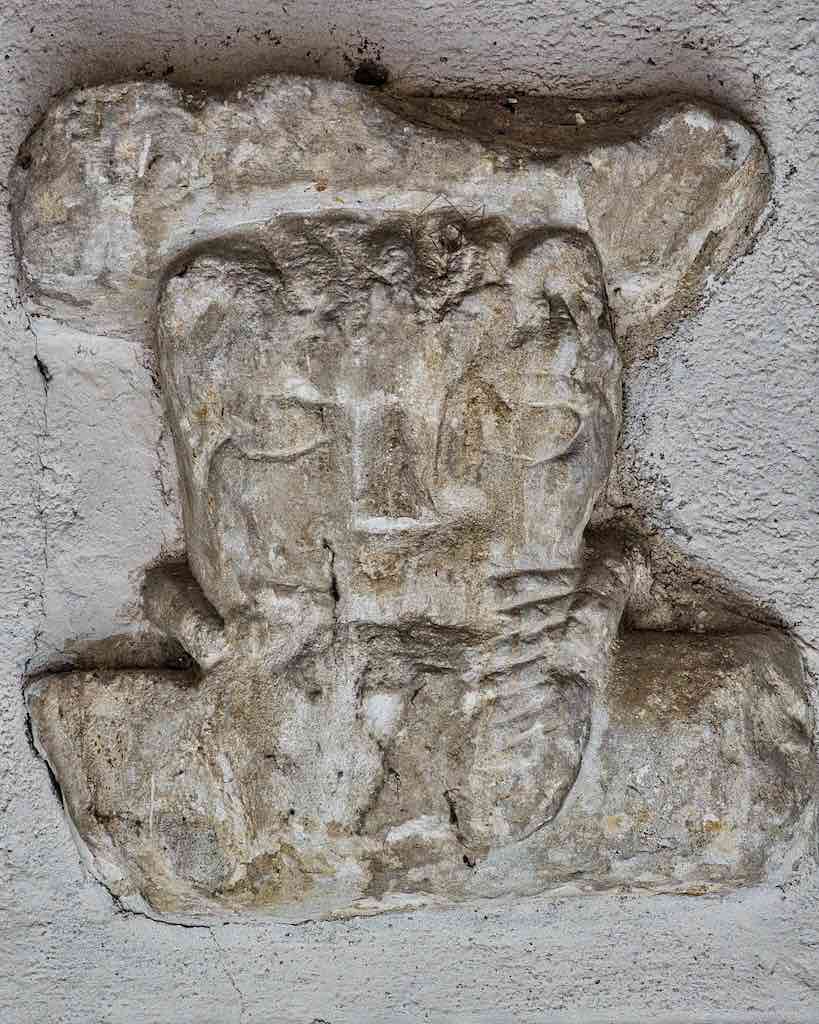 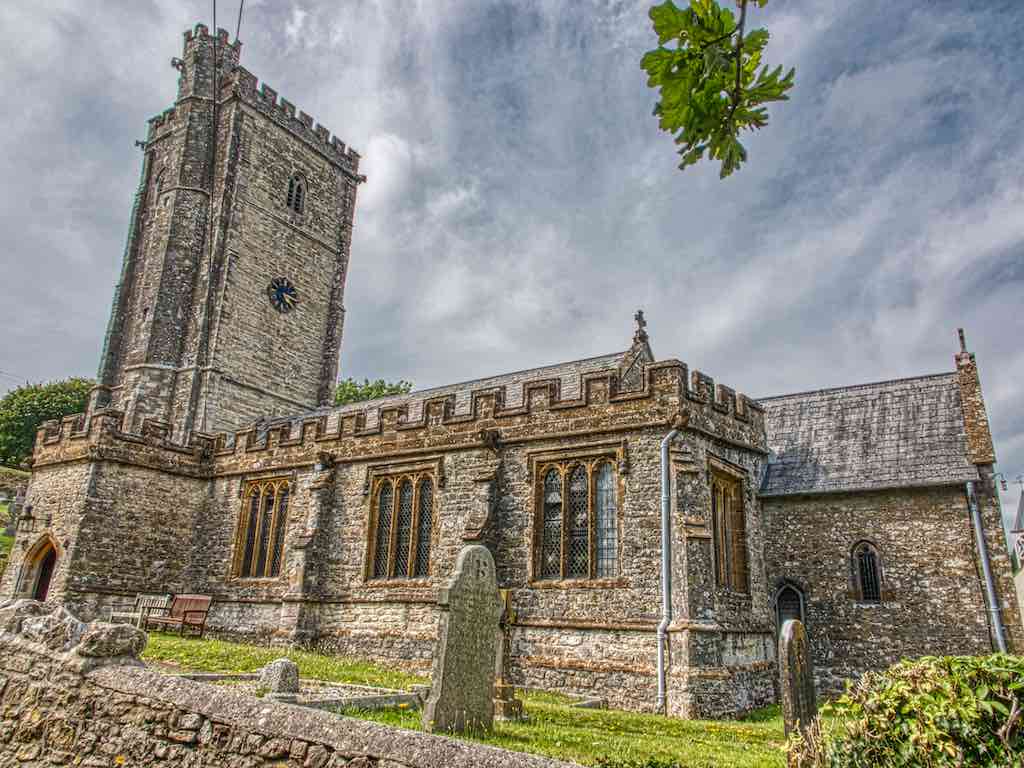 The very pretty Membury Church of St John the Baptist

There is a uniqueness about Membury, and it is not the age of the landscape with its 500 BC hill fort up on the east ridge, nor the very rare, for Devon, Roman villa that has been found over the west ridge next to Membury Court.

Though to be fair that is a marvellous deep history, with Membury Court also in in the Domesday book and where the travelling judge held his court in later Medieval times. Which kinda makes it a centre of administration from the Romans until relatively recently, a marvel and a half surely.

No, the uniqueness starts with its glorious position, strung along the bottom of a steep north-south valley with sheep-bedecked green fields, like foam-flecked ocean waves on either side.

A charm of a church tower nestled into the western valley side, so steep we can climb almost level with the top for a view worth the visit alone.

Nearly twenty-five meters tall, that tower is such a pretty thing, a simple block gloriously coloured and so very enhanced by that lush landscape that near engulfs it.

Sheep on the tower

With seemingly wild mountain sheep or even proper middle-eastern sheep, the kind that Christ knew, not the thin-sticked fluffy-wooled pudding bowls we have bred from them, gambolling sure-footed around the tower as if they owned it.

In truth, these are likely to be babewyns, or grotesques in modern language, meant to frighten off demons and evil, but I still vote Christ’s sheep because why not? And to be fair they are so cute they would not frighten even a baby demon, let alone a big bad devil.

It is a well built tower too, squared stone instead of the smaller flints usually used around here, but it is the view that gets me every time.

The church itself originates in the twelfth century, the chancel is thirteenth and there was a heap of rebuilding in the fifteenth, along with the addition of that tower, which this belfry window belongs to.

And that softer stone, once sharply carved, so high up that only birds and the Divine can see it in detail, weathered and time worn, contrasted with the pale-honey… Life is good with a mighty zoom lens…

Norman corbels near the porch

Whilst near the south porch these are set in the wall, now repurposed as hoodmould label stops, hoodmoulds being a band of extruding stone around the top of windows or doors to stop the rainwater washing over them, and label stops being little carvings at either end of a hoodmould.

These, though, have been placed at the end of victorian hoodmoulds and are likely to have been the original Norman corbels considering their flat tops and general style. Corbels were used to rest the roof rafters on, and were often carved with faces or demons, or even owls.

So likely enough these are Norman, twelfth century, from the very original stone church.

Whether there was an earlier Saxon chapel here is anybody’s guess, but they did get around, did Saxon chapels.

The lovely interior of Membury church

Inside there is some lovely light, softly illuminating the Victorian pews, and silence, deep, deep silence in this little hidden valley in the middle of an earthly heaven.

If God took staycations, she would be here (well, she is of course, but I still have a point).

The north transept with a very old inhabitant

Whether the north transept, shown here, was added in the fifteenth century or was part of the original design back in the thirteenth I do not know, but my guess would be thirteenth. It is thought to be a chapel of St Catherine, or an altar as they used to say (a previous researcher, Ethel Lega-Weekes, wrote there was one here in the north aisle, but there is not a north aisle, only a north transept).

The thirteenth century idea comes from its present inhabitant…

Alice de Mohun, quite probably, from around 1275

This lady, thought to be Alice de Mohun, the mother of Reginald de Mohun, the founder of nearby Newenham Abbey in 1247, and a major contributor to the abbey in her own right.

Newenham quickly became a major landholder and a big player in these parts, holding property in Membury as well; it was a Cistercian monastery, ace sheep farmers unsurprisingly. No wonder that nearby Axminster became a centre of the wool trade, though the Abbey probably reinforced that rather than starting it.

But is this Alice? Could be, for sure, especially if this is one of her chantry chapels, an altar where a priest said daily Mass for her soul (and the locals’ as well); plus they say she founded the original chapel here, which was a daughter of Axminster parish church. Then again Reggie also paid the abbey monks around 1255 to say a daily mass for her soul, so where was she plonked?

John Stabb probably has the solution:

Alice, the wife of Reginald de Mohun, and daughter of Lord Brewer, who died about the year 1257. It is a facsimile of the monument in Axminster Church, where she is buried.
Some Old Devon Churches, J. Stabb, 1908-16

So Alice was likely the founder of this sweetie and had a chantry chapel here.

As sure as eggs are eggs, a medieval dude or dudette could never have enough priests intoning prayers and masses for their souls, all over the place. Dangerous place, the afterlife.

Whoever she was, the locals knew, and it would it would have been like having a celeb moving into the area. Only dead. And here forever. And holy. With spiritual benefits for everyone. So definitely very much better than a celeb. Who, on the whole, are not well known for their spiritual benefits.

Though arguably a deal more entertaining than a stone statue. Some, anyways.

The chancel is low, as expected from a thirteenth century rural one, and has been nicely cleaned up by the Victorians whilst retaining its simplicity and elegant lighting.

And placing some wonderfully, modest medieval-style tiles on the floor, just pure delight with a couple of colours…

Or going for the cute factor here, with plump little bear cubs gambolling away.

Christ the Good Shepherd in the East Window

Whilst the Victorian stained glass in the East window is so on point, showing Christ the Good Shepherd in the middle of Membury sheep country.

Those angels’ wings are a bit of alright as well.

The 16th century screen in the south aisle, well restored

The south aisle was originally called ‘Our Lady’s Aisle’ referring to the Virgin Mary, and at the east end there used to be a Lady chapel, possibly behind the ‘extensively rebuilt’ fifteenth century screen; Mind you, this screen could also have once served as a parclose, dividing the chapel from the chancel, while a full rood screen with loft went across the nave and aisle.

The Lady Chapel was subject to an involuntary colonisation by the Fry family from nearby Yarty House some time after the Reformation; a not unusual occurrence, displaying social power or status in a church was becoming more and more common.

Pretty sure Christ would have been deeply unimpressed, but us humans seem to be in the habit of unimpressing God over and over again and still feeling the love.

But the Frys, they put their coat of arms up just above the door, to make sure everybody knew who the new owners were, dispossessing the Virgin Mary; the three horses, with the other two quarters being of the Langton family, who was likely a wife of one of them.

Subtle was not in their vocabulary, I am thinking.

The original tracery work is very nice indeed, bringing to mind bushy saplings with leaves on the verge of budding. Totally delightful.

Monuments in the south chapel

Nicholas and Elynor Fry from the 17th century

Of course, it is no good planting a flag, or a coat of arms, on a place without sending in folk to occupy it; the Frys surely knew this well, being English and all that…

So they sent in their troops, family ones not unsurprisingly, and here are the advance guard, Nicholas (died1632 aged 79), and Elynor (died 1619), ‘they lived in wedlocke 37 years’ which is a goodly time for sure, and had ten children, which is extra goodly.

Faces from the past

Originally mightily coloured too, now showing the ravages of age, Elynor’s hair tightly tied back, Nick’s hanging loose, both very formally dressed and facing each other across a prayer-desk, praying away, a very conventional pose proving their faith and modesty.

These faces are probably reasonable likenesses, and magical with that. Elynor for sure looks much younger than her husband, which makes sense as she died so long before.

Nearly a hundred years later in 1713 another Fry died, Frances, and her memorial is astounding.

Made of high quality white marble, this bust more than any other in the south west peninsular counties, exemplifies the highest standards of figure carving at that time.
Church monuments of Devon and Cornwall c1630-c1730; Easter, Clive James

Jeepers creepers, when Clive is right he is so very right, this totally rocks my world, it is that good.

The flowing drapery, that slightly askance head with a faint smile, the touch of plumpness, the hair, the faint nipple on her right breast and the way the clothing is caught by it, her throat, the dress’ collar… Yet another reason for a wander over to Membury church.

Angel delight from the 18th century

Or these, not quite in the same league but very nice all the same, some wonderful angels in the clouds from another memorial, eighteenth century again, singing songs of comfort and love for the whole parish.

But there is something else here, around this sweet little honey-coloured church in the far East of Devon, something even hopeful and life affirming, overwhelming the shallow Frys of the this world, who want respect because family.

There is a plaque here to Thomas Wakley (1795-1862), born in this parish at Land Farm, and one of the greatest reformers of the nineteenth century, though sadly little known today. He became a surgeon at the age of twenty-two, and spent so much of his life fighting for reform of the medical profession, or as he said,

[We deplore the] “state of society which allows various sets of mercenary, goose-brained monopolists and charlatans to usurp the highest privileges…. This is the canker-worm which eats into the heart of the medical body”
Wakley, The Lancet 1838–39, 1, p2–3

And they say social media has increased the rudeness of public debate!

He founded The Lancet in 1829, still going strong as one of the most respected medical journals in the world, and used it to campaign for reform.

His courtroom dramas and untiring pursuit of honesty and probity were largely responsible for the reform of English medicine in the mid-nineteenth century. His brave and far-sighted editorship of The Lancet laid the foundations for the practise of medical publishing and journalism for the next 150 years. We owe him an enormous debt
The Lancet

Oh, and he also campaigned against slavery, adulteration of food and flogging, as well as for the extension of the vote, the Tolpuddle Martyrs (he was treated as a hero when they were eventually pardoned), a professional coroner system… The list goes on and one.

And he grew up here, learning right and wrong in this very parish, worshipping in this same church, touching the same stones as us, walking the same fields that surround this beauty, carrying this, the place of his youth, the memory of deep country values… as he trotted off to change the world.

By gum, Membury has a lot to boast about.