Malborough Church of All Saints Description 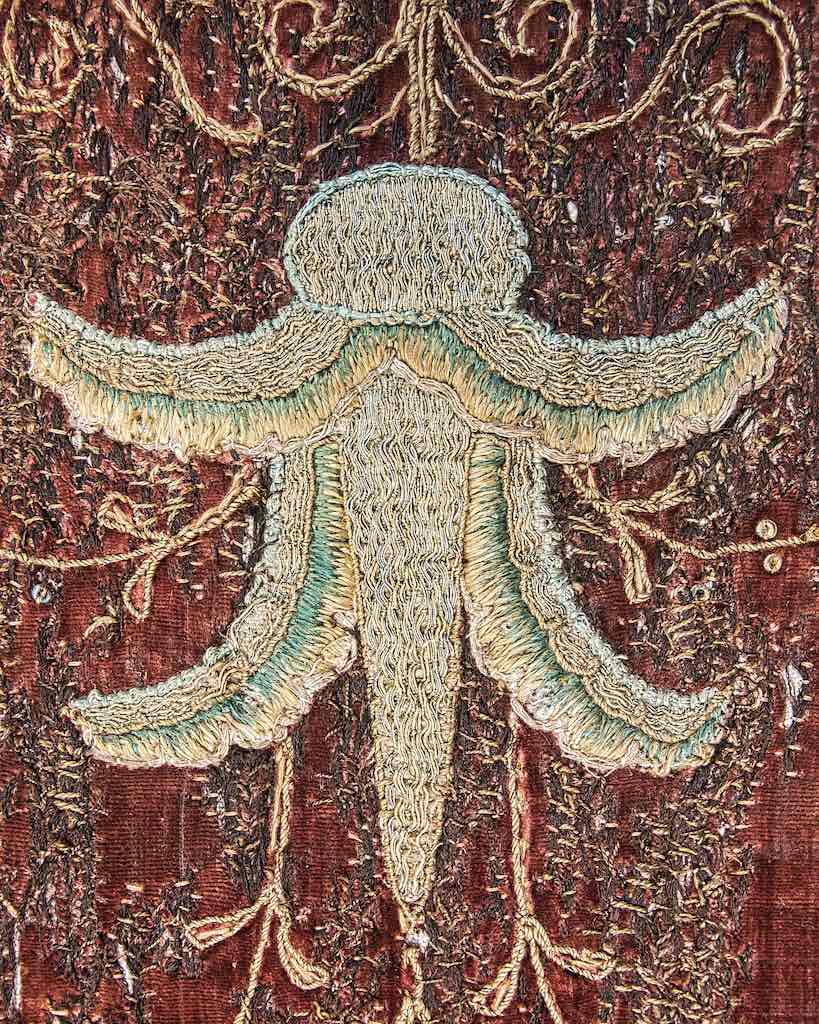 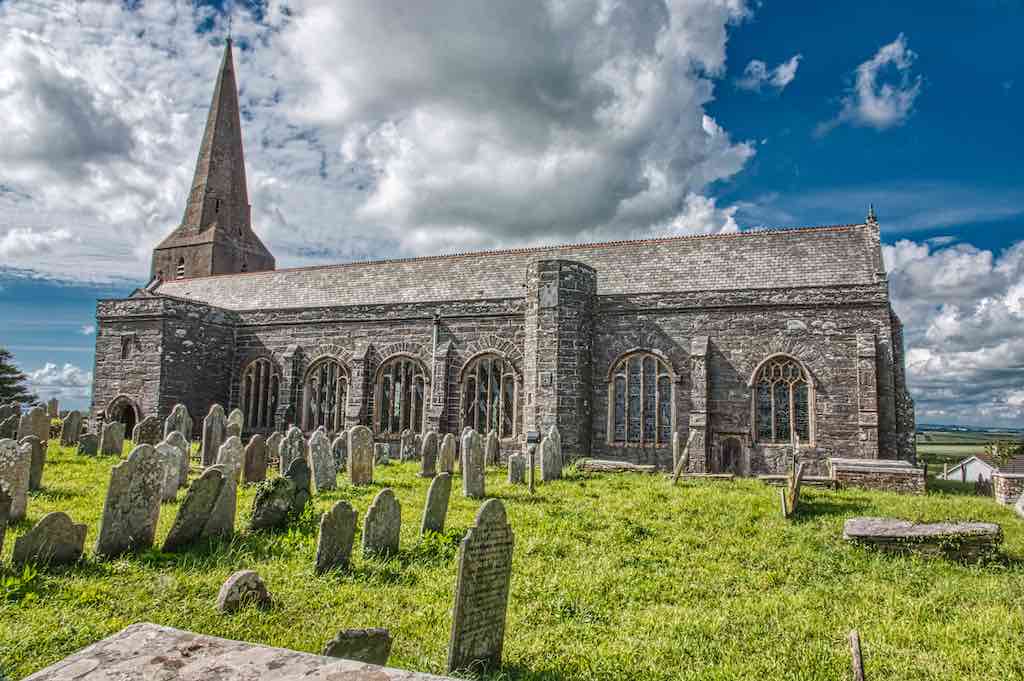 Malborough Church of All Saints, a 13th and 15th century church

A coastal parish, with the sea on two sides, one looking over to our cousins in Brittany, descendants of the Britons who moved there as English culture enveloped the South West way back when, the other along the Kingsbridge Estuary.

In truth it is no estuary but a drowned river valley like so many ‘estuaries’ on the south coast of Devon and Cornwall. Correct wording aside, it makes for a cracking ship shelter and a number of ports grew up, including Salcombe, part of this parish until relatively recently.

Indeed there is an area on Bolt head, where the sea and estuary blend, originally named the Sewers though now spelt Soar, which likely comes from the Old English sæ-ware meaning ‘sea-dwellers’.

Malborough Church of All Saints 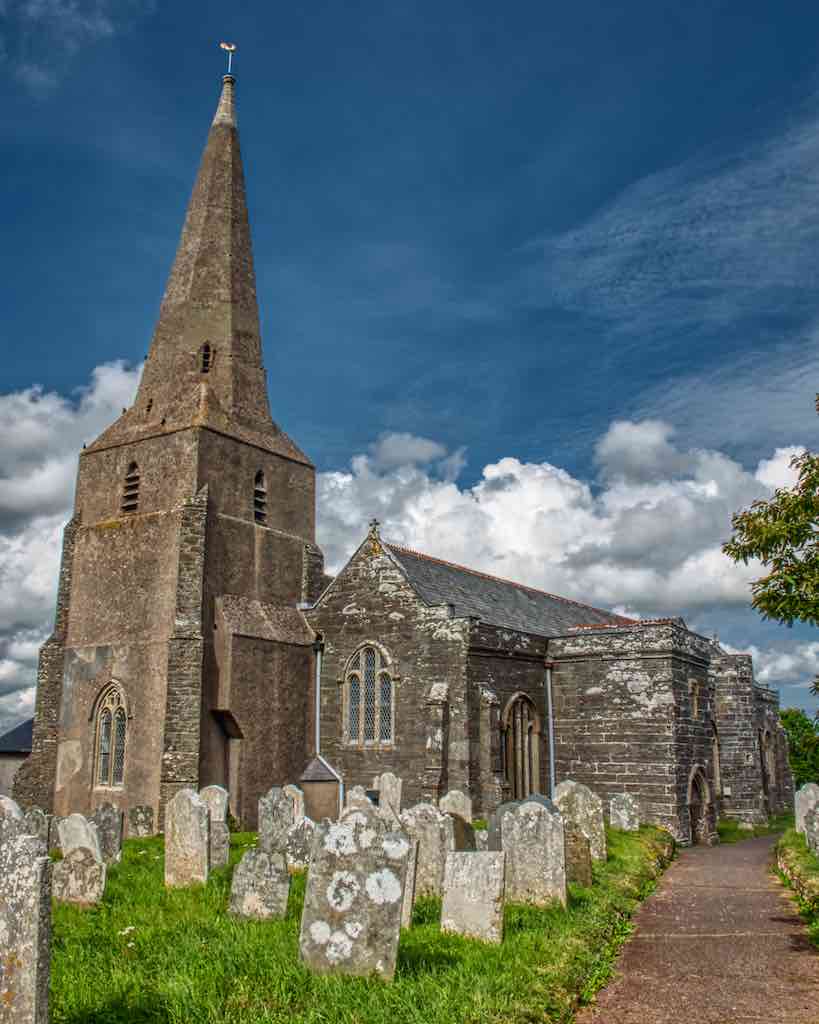 The tower and spire are 13th century

It is a big church too, as fits a mighty wealthy parish that was. Salcombe became a mighty fishing and ship building port. Why, in 1566 it had more seine nets than any other fishing port around, and in nearby Hope Cove…

‘It was claimed that 900,000 pilchards were caught by just five men.’
Salcombe Maritime Museum

The tower and spire here are the earliest past of the church, from around the thirteenth century though that window is much later and the render is modern. This kind of spire, that starts from the tower walls, is called a broach spire.

The rest of the church was rebuilt in the fifteenth century. 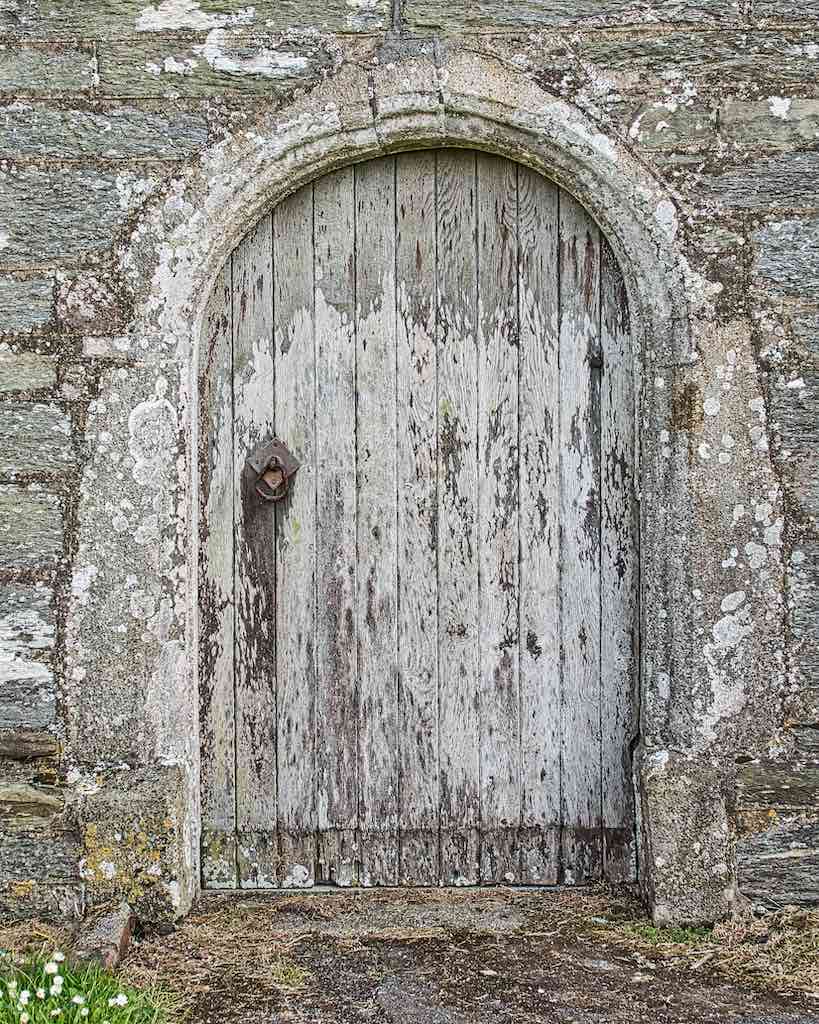 In the old north wall is this old wood in an old door and an older doorway, slightly wonky and full of charm; an enchantment of greys and textures to see and feel.

The little things just make the whole better and better. 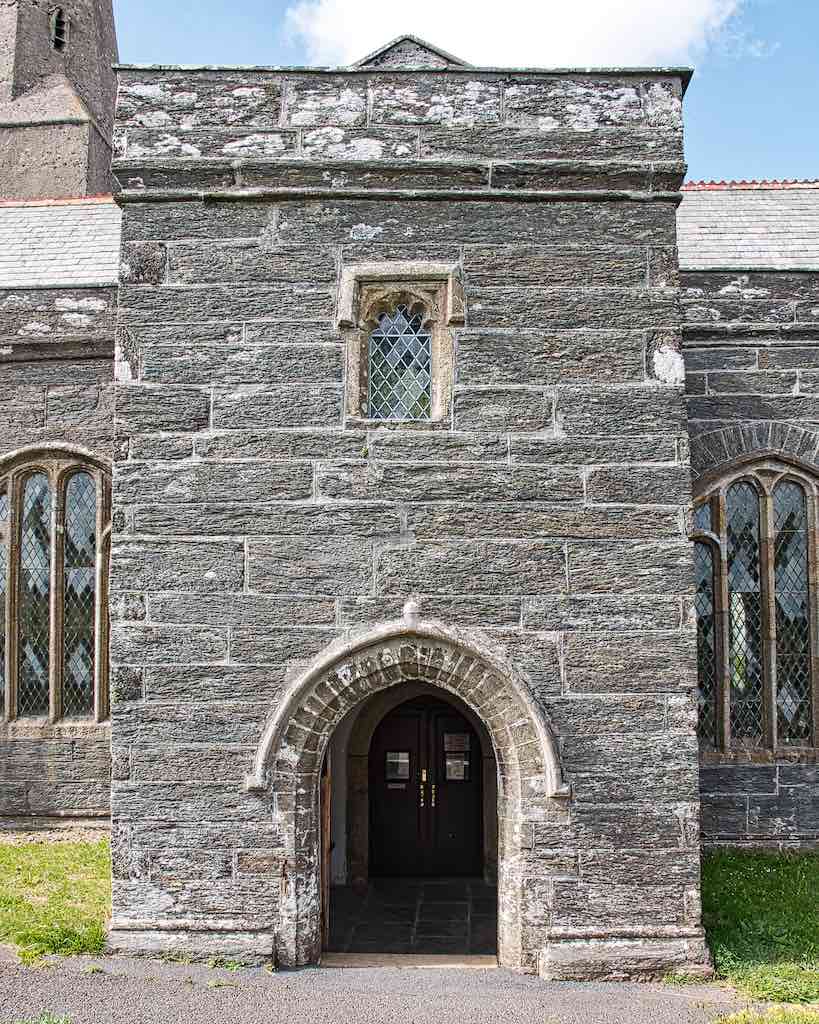 The south porch is made from local slate stone

The two-storey porch is a lovely blocky design, with some spiffing granite edging around the window and door, and the shades-of-grey local stone as the background.

To be fair, it wouldn’t look out of place in a Brutalist Convention, and is a design approach that churches around the South Hams embraced when they were rebuilt.

Granite vaulting in the porch 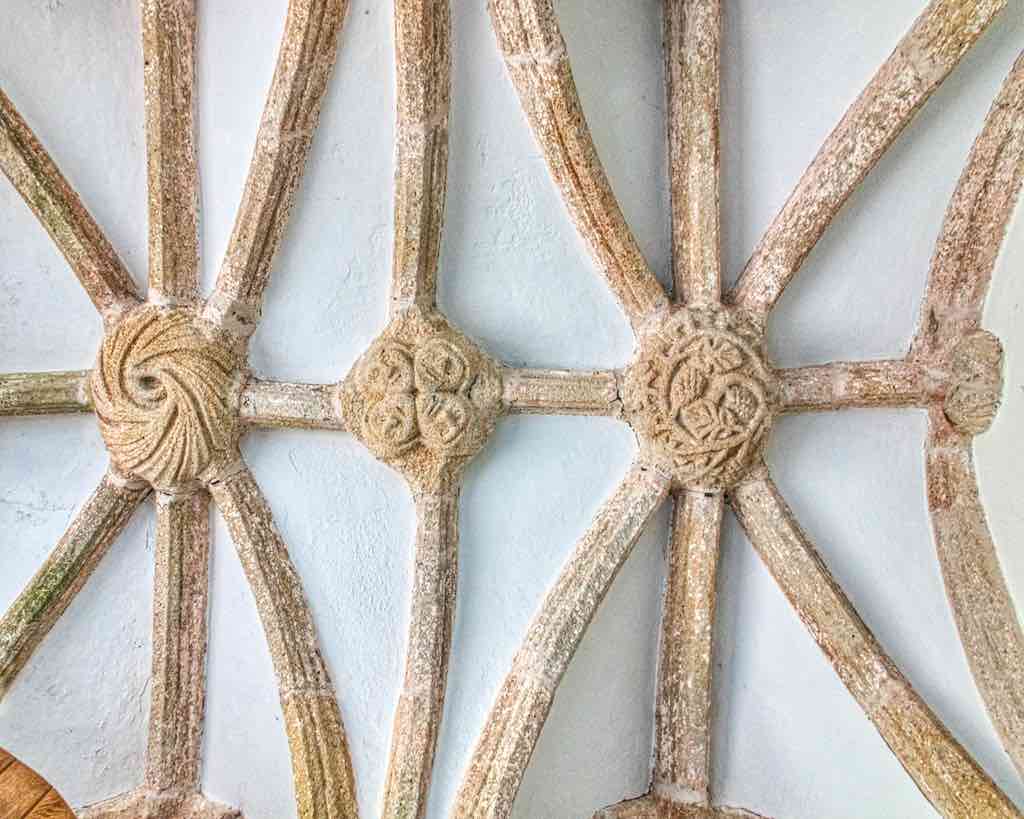 Inside the porch is a granite-vaulted ceiling, very posh for its day and another indicator of the wealth of this parish. The colour too, just right for a seaside church, beaches on a sunny day.

Most parishes in Devon were rich through wool, but here it was the fish, which would have been pickled or smoked and traded all over. Catholics at that time ate fish on Fridays as a form of penance for their sins, but probably more importantly southern Europe had a protein deficiency. Us Brits are fortunate to live on a wet island with grass everywhere, good cattle and sheep country, whilst in most of Spain and Portugal the grazing is sparse; barrels of protein-packed fish sold like hotcakes. 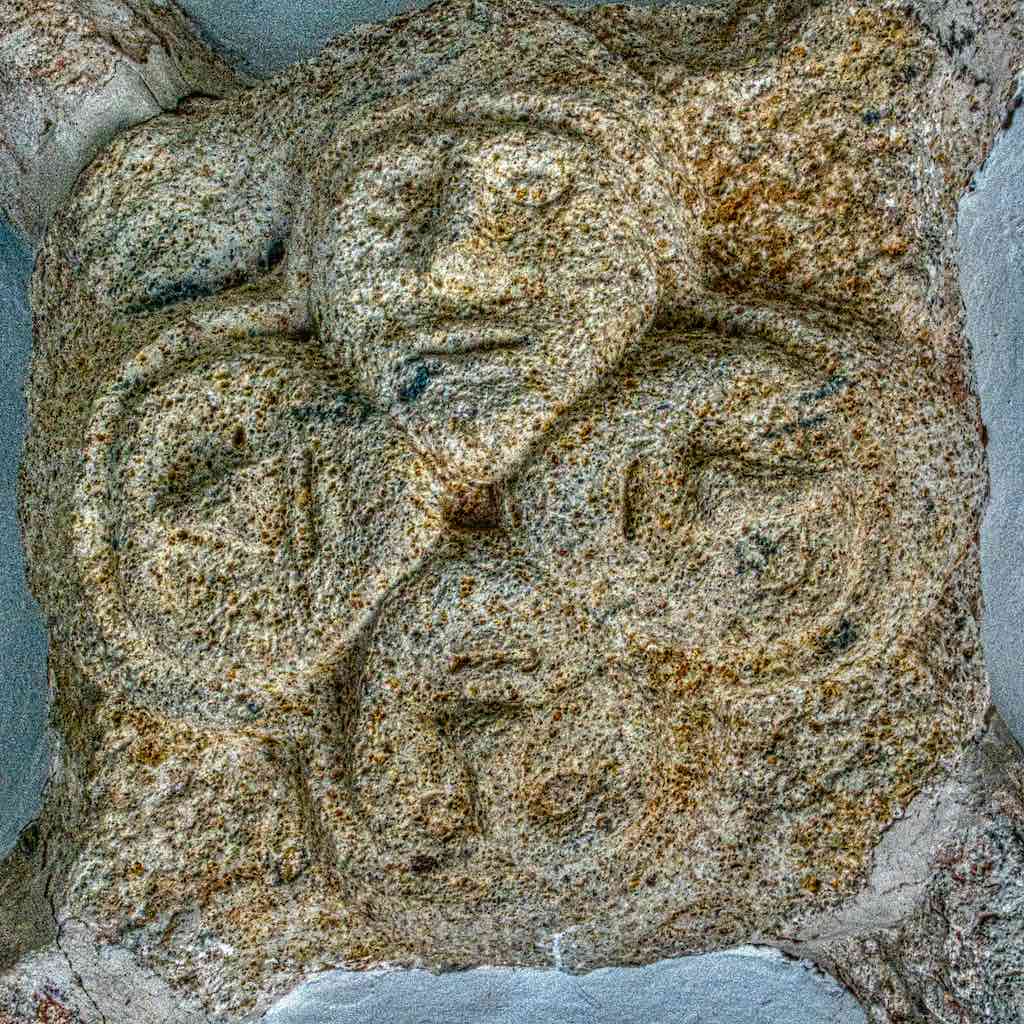 Four heads are better than one, especially if they are granite

The bosses are the thing here though, rudely carved because granite is a very hard stone and the metal tools of the time were a deal softer than modern ones.

The four-headed central boss here probably symbolises the community of the church, with the grapes of the Mass wine, the Blood of Christ on one side (see preceding picture) and is that wheat on the other side? For the Communion bread, the Body of Christ? Which would make this the Community of the Church in the Eucharist, a very fine symbolism for a church entrance, though this is speculation… informed speculation mind you, but still speculation. 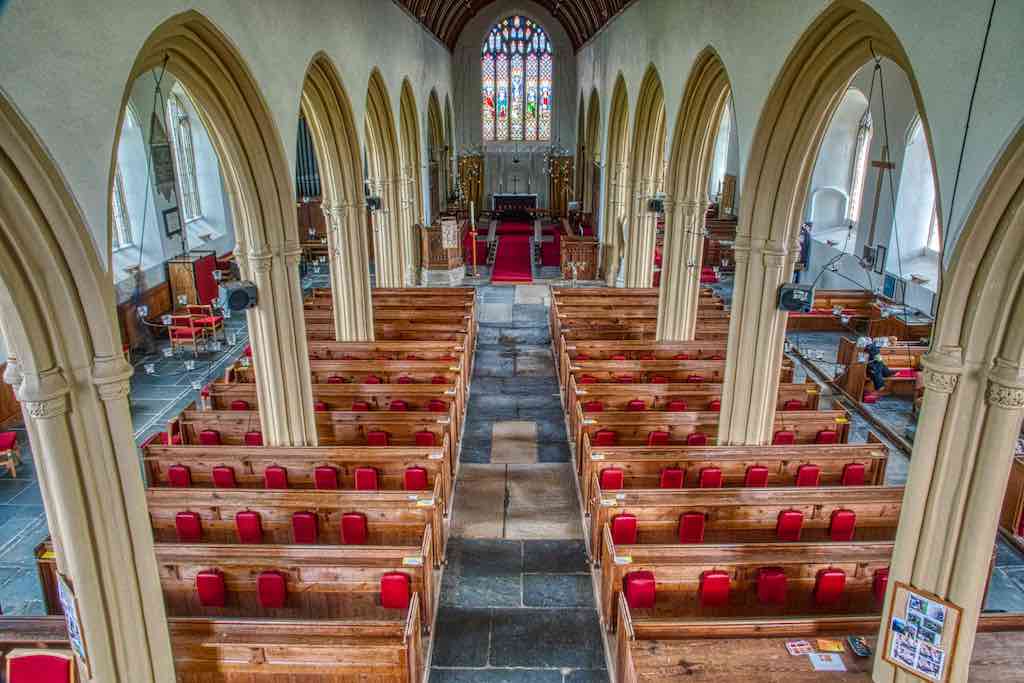 Light and space and graceful arches make for a lovely interior

The interior was drastically restored last in 1870 to bring the church into the modern world, no bad thing in itself.

Now the space inside is big, with two very graceful arcades flowing down the nave. During the last renovation…

The roof entirely new, the gallery the western end of the church has been removed, and the tower thrown open. Open benches have been substituted for the old fashioned unsightly pews that formerly existed, and which happily are being rapidly removed from many of our churches circumstances admit of its being done; the columns and arches have been thoroughly cleaned the old wooden windows have been removed and replaced by stone mullions; a handsome new stained window, the gift of Captain Pinwell, has been placed in the eastern end of the edifice, and there is also new reredos, the gift of the Rev. J. Pinwell. The chancel laid with Minton’s tiles.
Exeter and Plymouth Gazette – Friday 29 April 1870

The whole of which was to make a church accessible to all, without any private seating, and a place where the rain stayed outside and the congregation were comfortable inside.

Cornworthy church nearby has kept its wooden windows, albeit renewed as one might expect, and stunningly beautiful they are too, so they definitely existed in other churches. 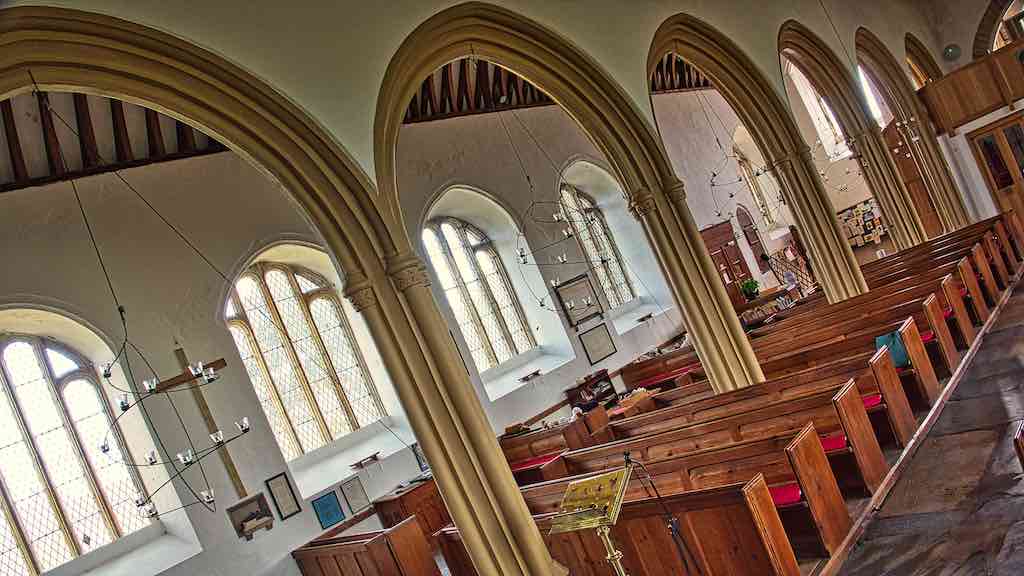 These arches though are very classy, with those lovely browns and creams gracefully breaking up the light-filled space. Very nice indeed. 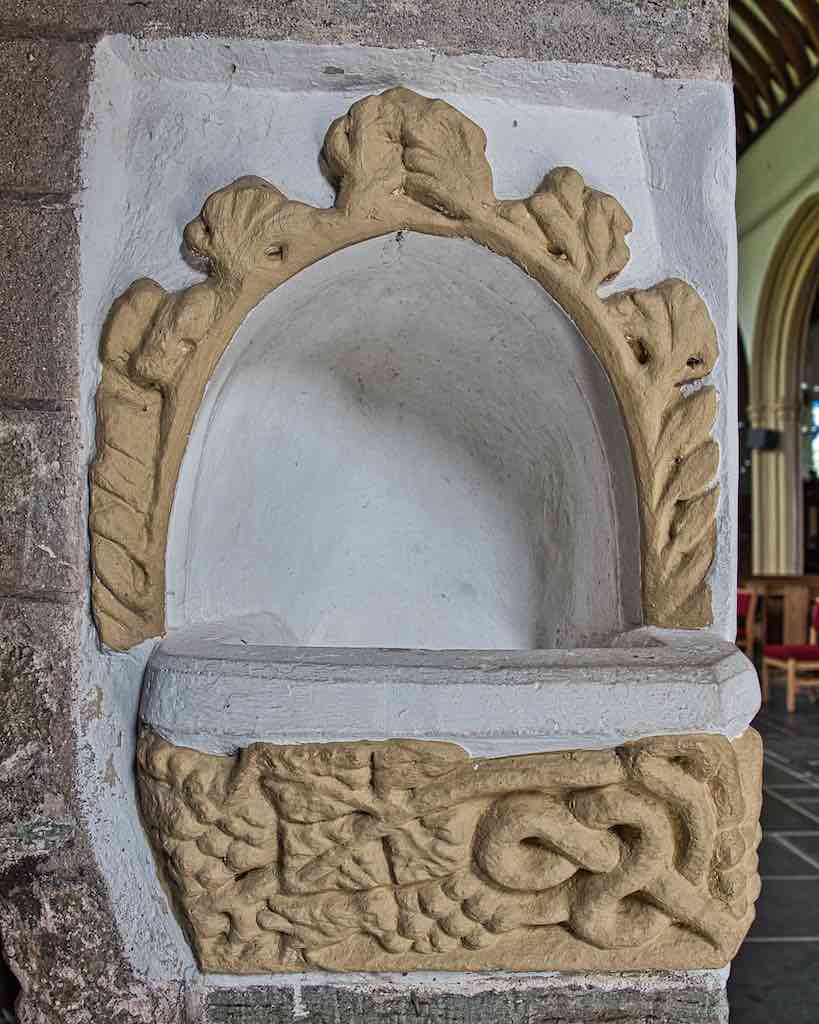 Just inside the north door is this pretty, a holy water stoup which looks medieval at first glance but most probably is a nineteenth century creation from fragments of medieval carving. For one, that arch at the tip meets in a very clumsy way as well as not rising properly from the bowl, and the carving below seems to set in a cement body.

But it is the carving itself that is the delight, to see it up close and able to touch it, lovely that is. 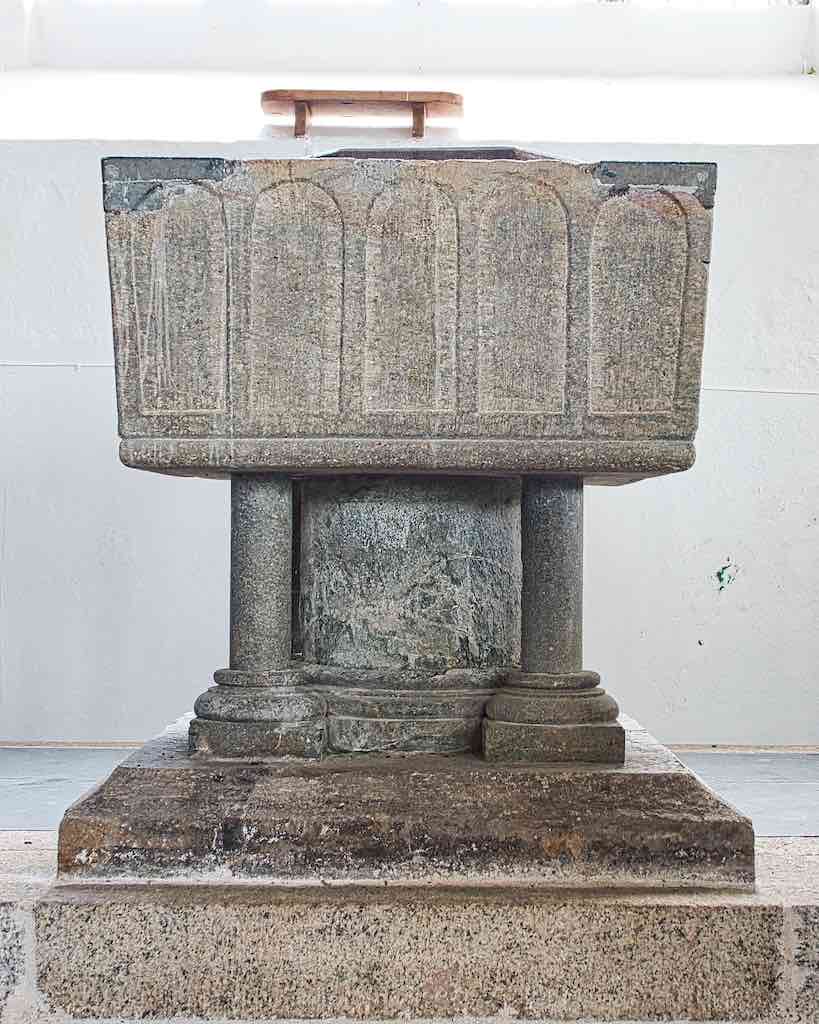 The font though is all Norman, twelfth century, apart from those little columns around the central stem.

I like the bowl. A lot. It is very clean and simple, has a powerful presence and is well proportioned. The mason who carved it had a most excellent eye.

The chancel in Malborough church 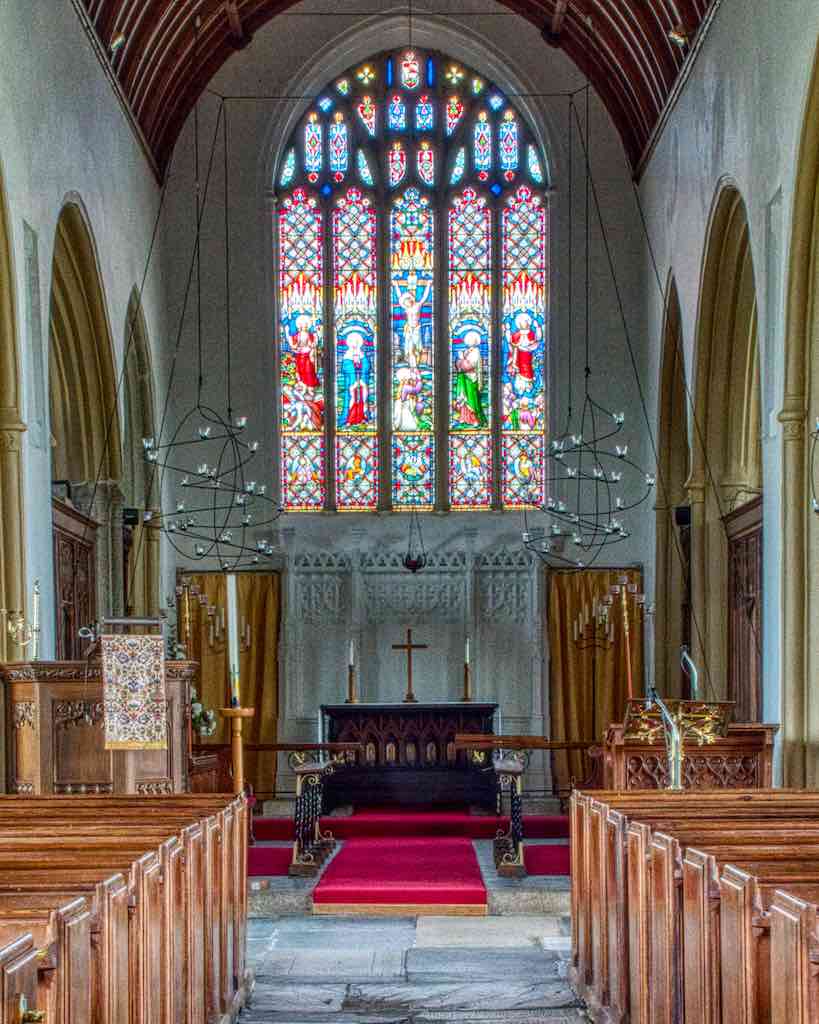 A bright and airy chancel

The chancel is a nice open space, with one of the few stained glass windows in this church taking centre stage.

Again, the space and light here is constant delight, especially as this amount of both is comparatively rare for Devon churches, at least the deep rural ones I tend to haunt. Just right for a coastal church too.

And those lights too, what a great choice! Also full of space, and not blocking the view in any way. 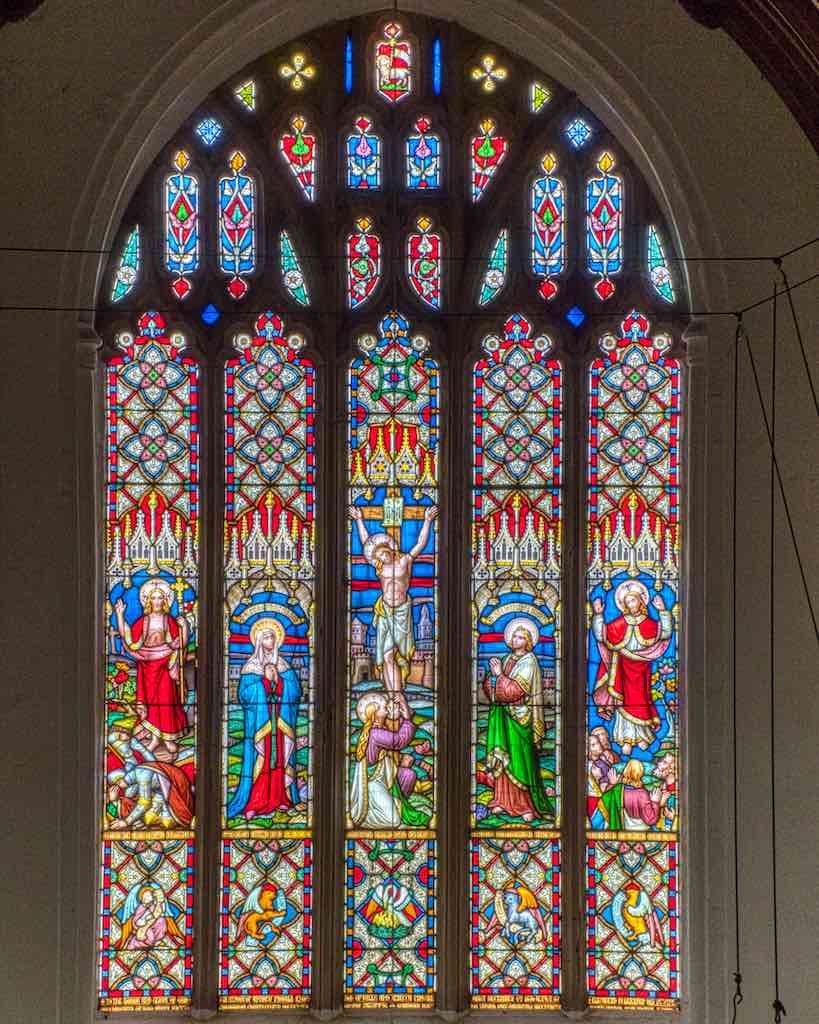 Patterns and the Crucifixion in the East Window

The fine East Window brings a grand splash of colour with it too, not only in the figures but also in the intricate patterning that those Victorian stained glass artists were so boss at. 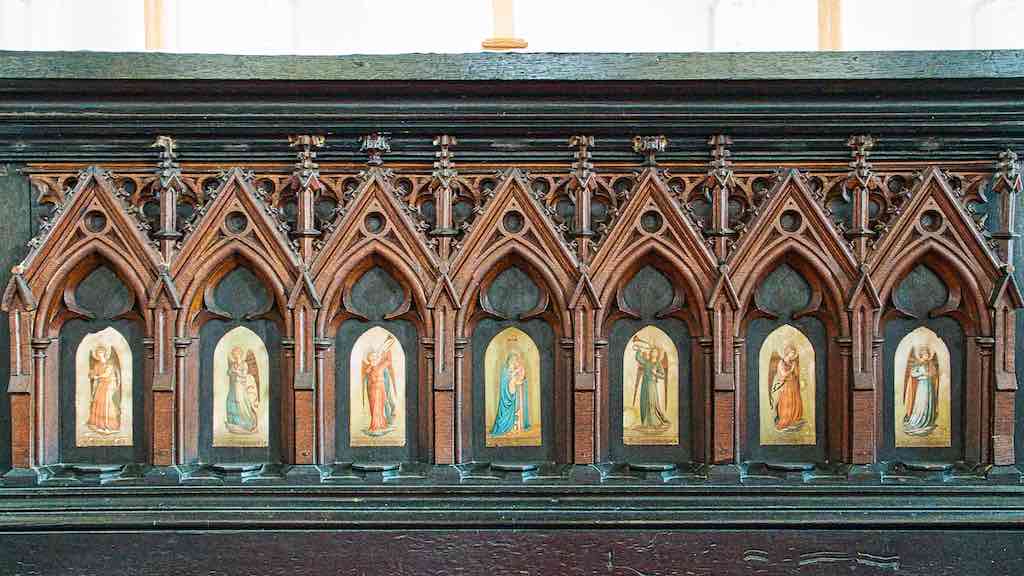 The altar itself (installed in 1840) is a bit of an interest, inspired as it is by the High Altar at Cologne Cathedral and designed by the Rev Richard Hurrell Froude (1803-1836) who was one of the founders of the Oxford Movement in 1833 and an early example of Gothic Revival style.

Richard was also from the same clan as the gangster priest over in Knowstone, but definitely on the angels’ side this one. The Oxford Movement was a radical re-imagining of the church, and arguably well-needed at the time with a church that had somewhat stalled in its mission.

The Cologne altar has carvings inside the arches, this one has sweet, almost sentimental paintings which are adorable; very affective, very medieval and very radical for their time; none of that strict ‘the scriptures are yer man’ Protestantism here, images and rituals were the new kids on the block. 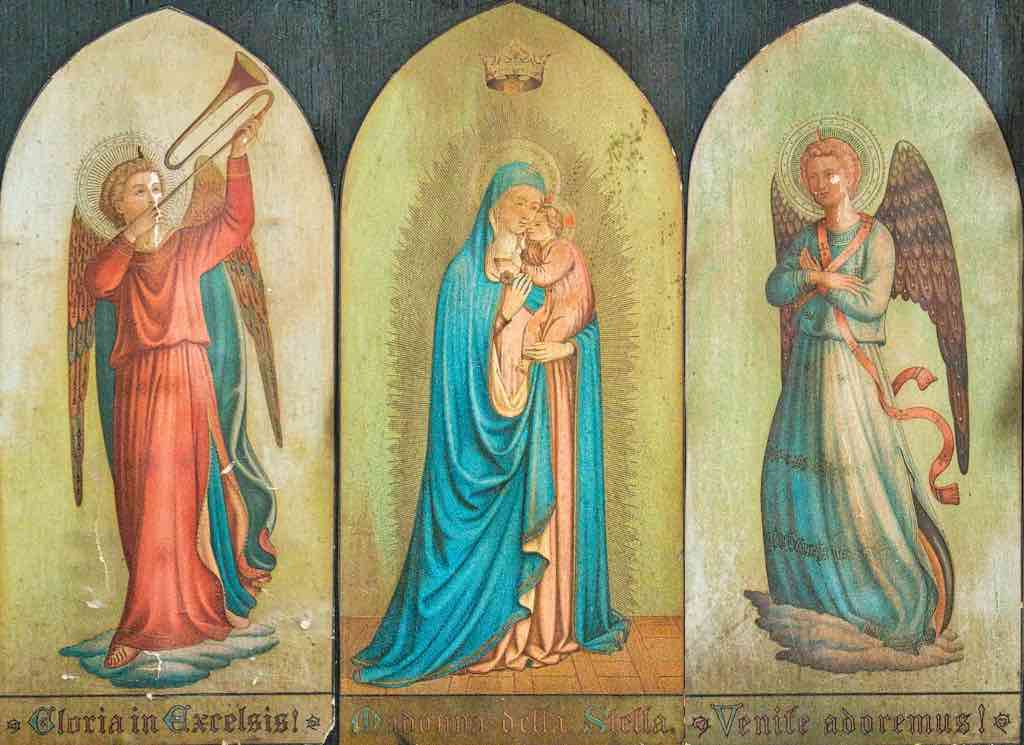 Mary and her angels

The centre image is of the ‘Madonna of the Star’, surrounded by angels singing and playing music, with magical gossamer wings, apart from one grump with crossed arms who seems about as interested in the whole thing as a strict Calvinist meeting the Pope.

Hey ho, there is always one, is there not? 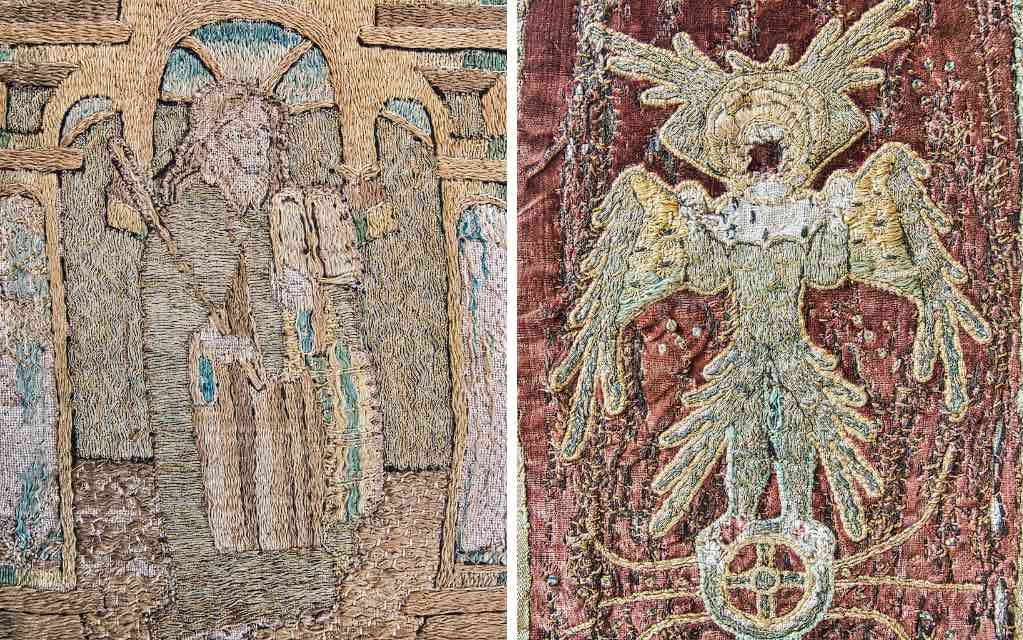 Arguably the most fascinating treasure here is this altar cloth which was put together from two fifteenth century ‘orphreys’ and probably some velvet from a priest’s cope, a robe they wore for services that did not involve celebrating the Mass. An orphrey is a highly embroidered band that is used on a priest’s rig, not necessarily confined to just one type, and they were the cat’s miaow when it came to bling and priesting. As here.

Saints and angels sprinkle the length, all 218 centimetres of it (it is 91 centimetres across) and, faded as they are, they are marvellous, giving a fine hint of the gorgeous textiles used in the medieval church.

Here they are, still dressed in the remnants of their finery like the morning after of the grandest party ever, brought to a screeching halt by the Reformation and what a hangover came after that! The whole is under reflective glass, so big photos do not do it justice, but the details surely do.

We do not know when the two orphreys were combined to make an altar cloth; some say in the sixteenth century, some say later, but what we do know that even pre-Reformation it was common practise to recycle textiles within the church.

Of saints and orphreys 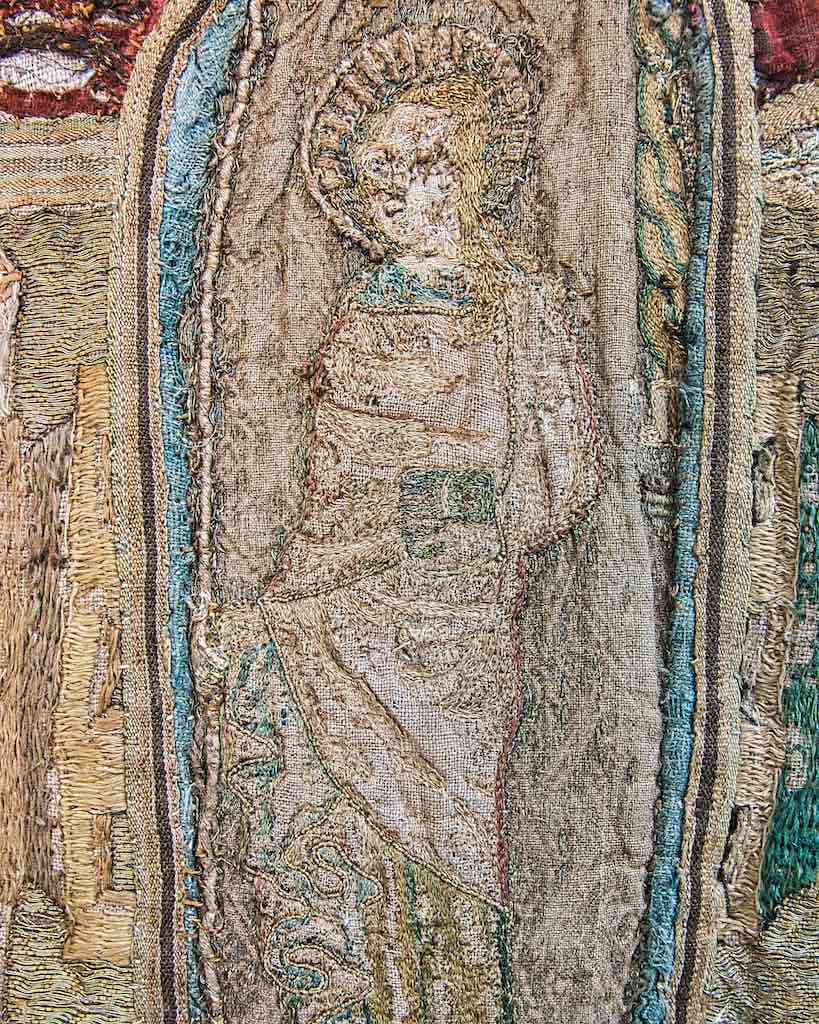 A female saint on the cloth

It is made with a linen back and various threads, including gold, wrapped around each other; the time and concentration must have been immense. One speculation is that is was made at nearby Cornworthy Priory but really we have no clear idea.

The original orphreys were probably donated by women, either by a single donor or by a ‘guild’, a group of men or women who were dedicated to raising money and looking after an aspect of the church. Women tended to be associated with textiles in the church, even though cloth production involved both genders in about equal amounts, and female names come up all the time when textile donations are mentioned in the church wardens’ accounts.

But above all is so full of magic, faded and somewhat threadbare but then again my mirror look is approaching that style anyways.

Surely, come dusk, at the locking of the church, these beauties descend to wander the church, show off their faded finery and gossip about visitors, and in the morning they are back on the cloth, but in different positions.

The power of churches reach deep. 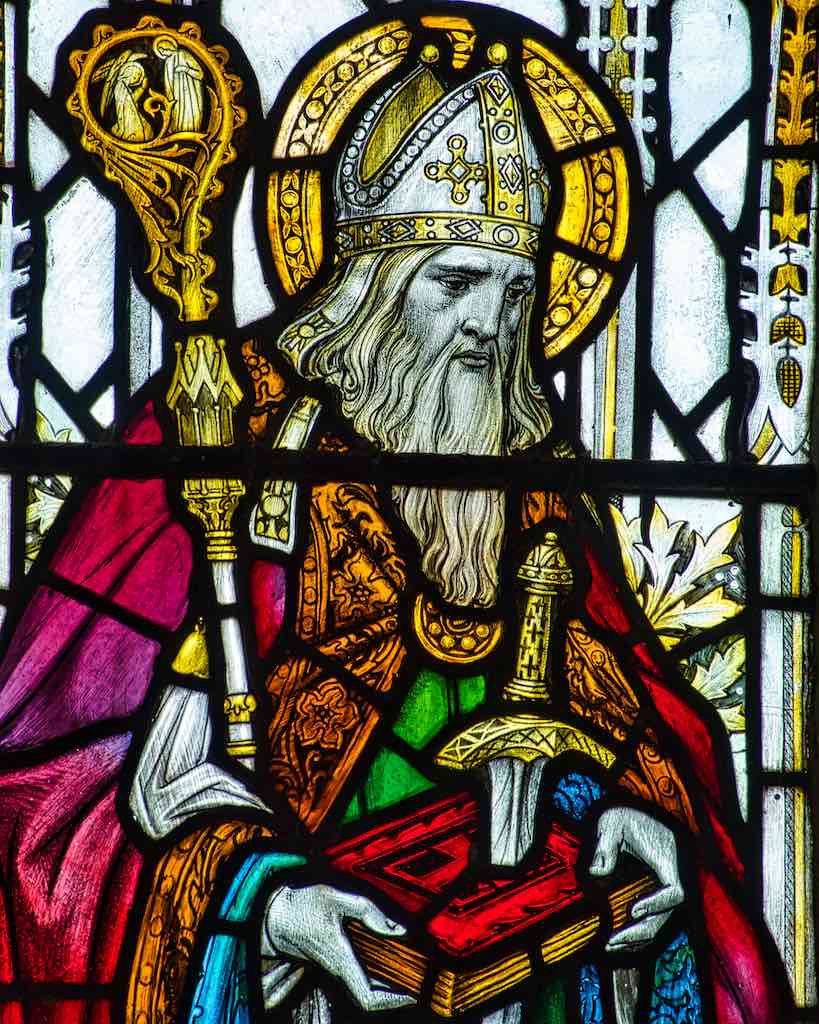 And talking about power, this bearded dude is St Boniface holding the gospel that he used to defend himself against the sword that would martyr him (in what is now Germany). A violent death, but when his armed comrades came to defend him he said

Cease fighting. Lay down your arms, for we are told in Scripture not to render evil for evil but to overcome evil by good.

And that, that is powerful, I venture.

The Annunciation in St Boniface’s crook 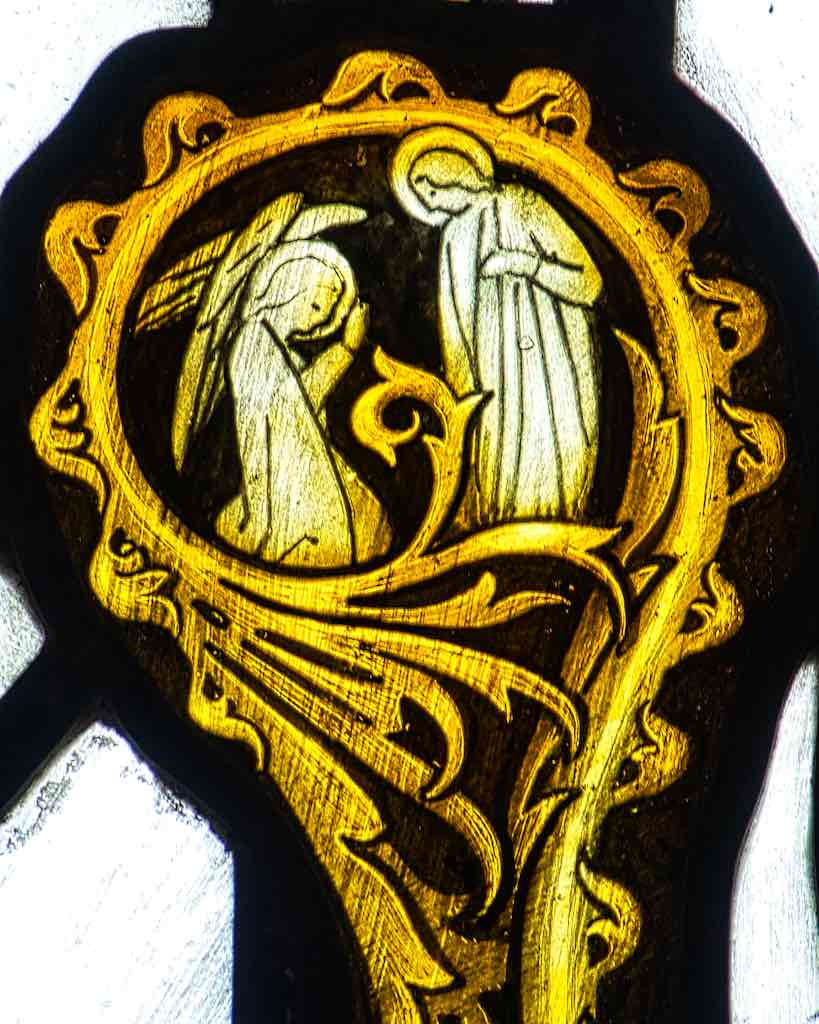 The Annunciation in miniature

In his bishops’s crook is this marvellous little Annunciation scene, the Virgin Mary dedicating herself to God just as Boniface did; he was a local lad too, born around 680 AD near Crediton and now the patron saint of Devon.

What a sweet little detail this is too.

The colours of the parish 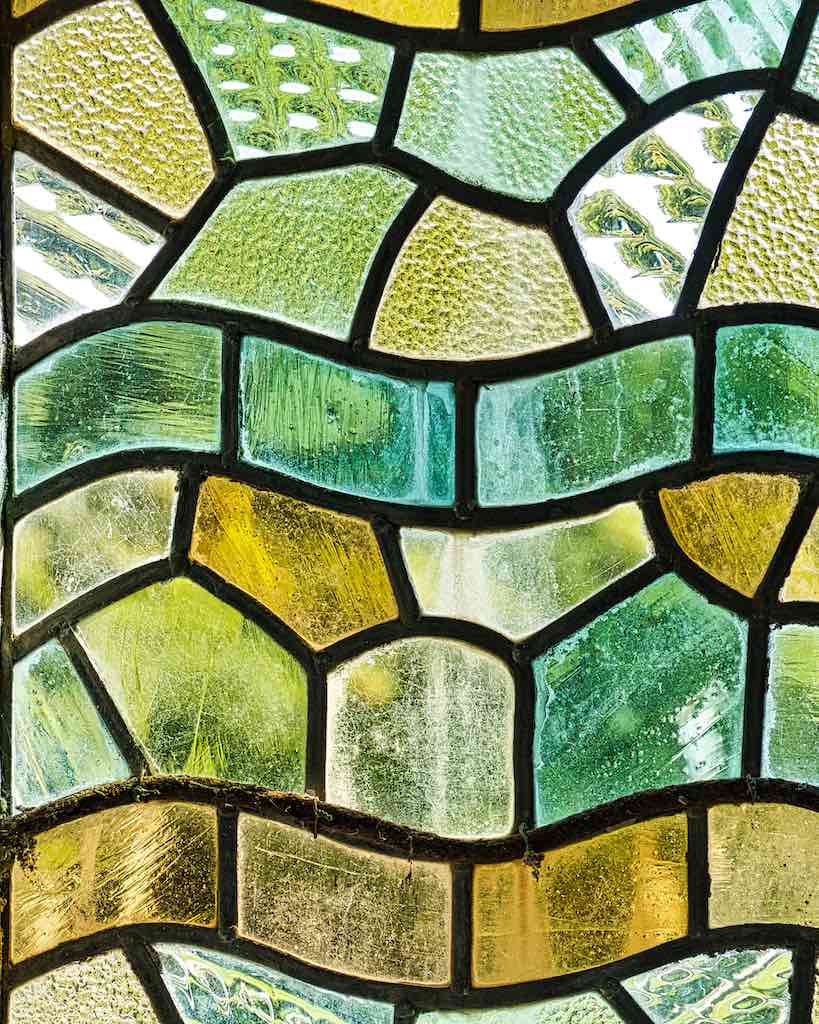 While here, in this meditation in glass of greens and golds, the local parish landscape is captured so wonderfully, the colours of the sea and the hills, the sand and the sun, the waves on the rocks and the wind on the beaches, a marvellous work for this church by the sea.

The calm of the church 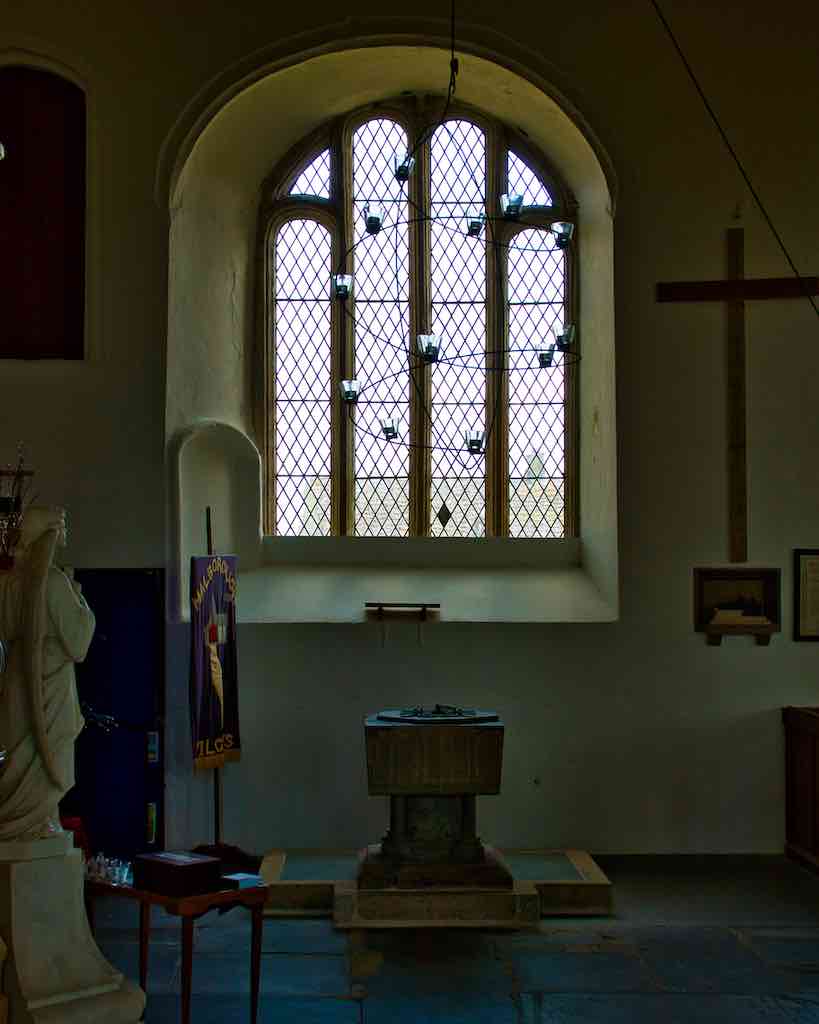 Churches, eh? Once addicted never cured, and who would want to be.

The guidebooks hardly mention this darling, except sometimes in passing, and not always with full approval, but here, simple, modest, light and colours and font and angel, so little yet so powerful…