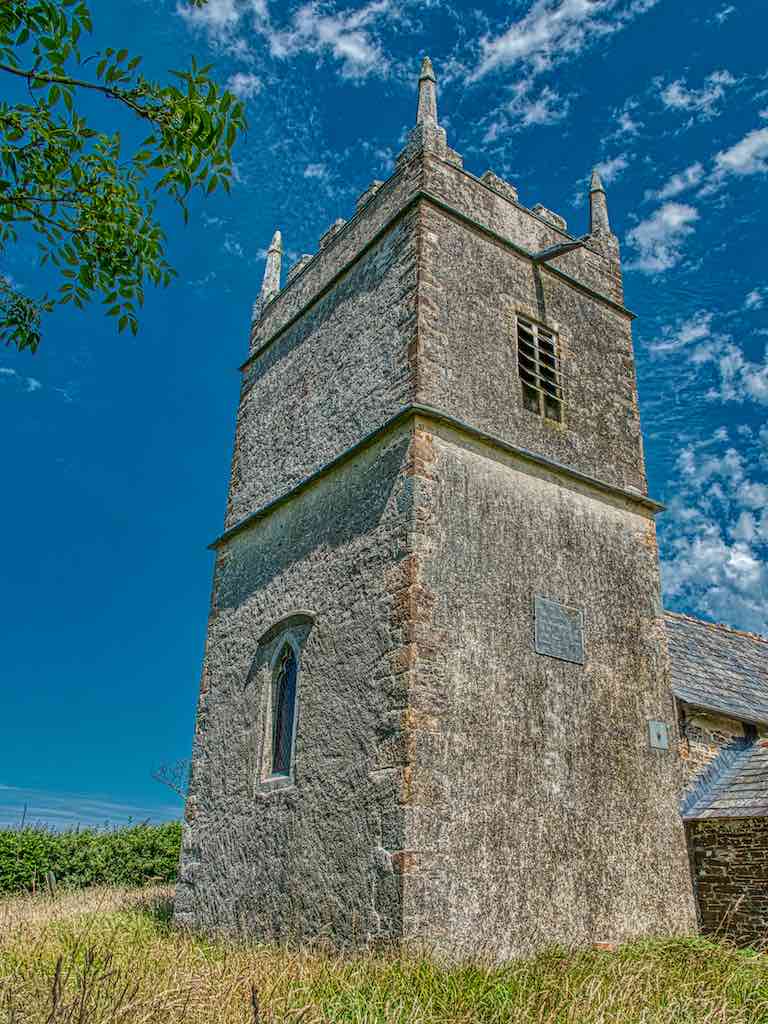 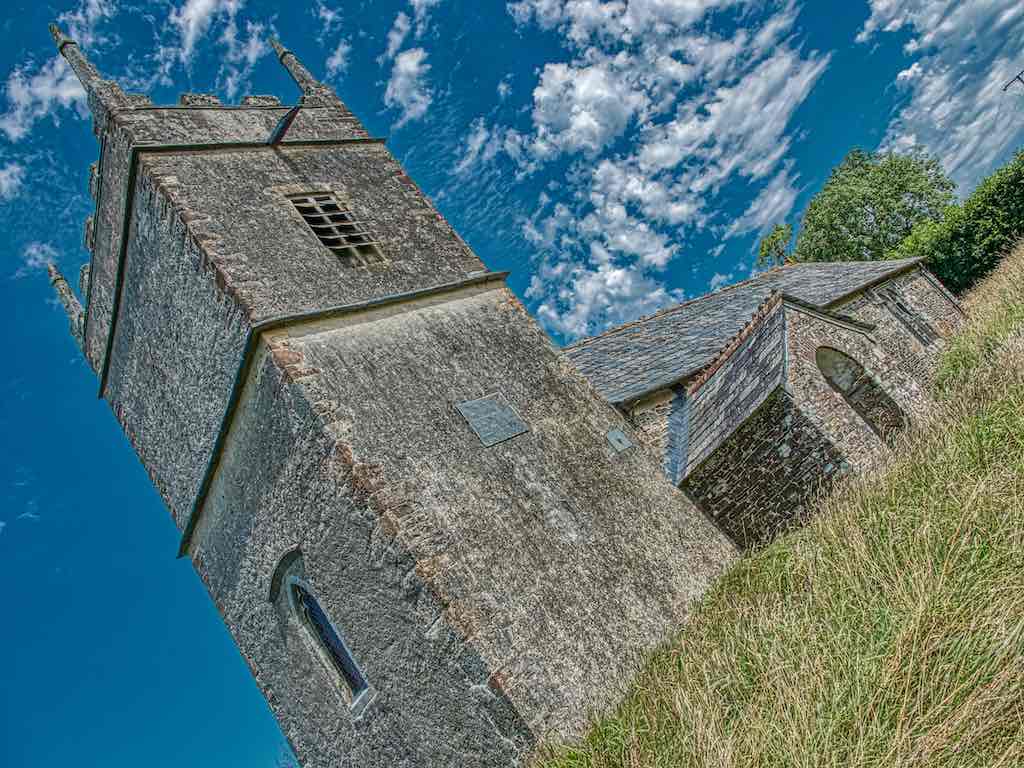 The church is a tiny gem, sitting in a parish only a hop, skip and jump bigger than the building.

Luffincott, a teensy jewel sitting at the tip of a dead end lane next to Luffincott Barton, on a south west slope that gradually falls to the River Tamar; a beautiful position for a little settlement, and Luffincott meant exactly that in Old English: ‘The little settlement of Luhha’s people’.

And ‘barton’ means ‘barley enclosure’ and is a common farm name in the west country. Back in the day, before centuries of plant breeding, wheat was a weaker crop needing fertile land to do well in, while barley grew on more marginal land like here in West Devon.

A barton was also the local Big Man’s personal land, or demesne (pronounced close to ‘domain’) where his tenants and serfs and all on other parts of his estate come and work for free. They had no choice.

So what does this have to do with the church, and why did it not grow like its surrounding brethren?

Estate owners liked to build a church next to their manor, for themselves and their folk, as Christianity grew in the land. The estates often became a parish, the little church became a big church, and often a village sprouted up around too.

Not here though, not at the tip of a dead-end road isolated even for rural Devon… and definitely not where folk can drink farm-made beer (all that barley, y’see), basking in the landscape and with a church next door to confess all sins. Progress is just another word for so much to lose.

Pint-sized the place may be, but the church totally rocks.

Luffincott Church, such a pretty little thing too, and so well looked after.

Down the pretty no-through lane and parking considerately in the farmyard, we find this gem tenderly cared for by The Churches Conservation Trust. Just that name, let alone the trip here, raises our expectations and the truth is better.

The listed building guide says it has fifteenth century features with probable earlier thirteenth century dimensions, the tower and the porch coming later. Without any evidence we cannot say for sure but if the history of the place above is reasonably accurate then there was likely an earlier church, probably a Saxon one as well.

What we are seeing though is an eighteenth century rebuild, minus a north aisle that they demolished, and it is a doozy.

Plain, simple and humble for families of strong faith, families who lived and laboured in such a constant wonder of a landscape that the possibility of no God was about as realistic as 80 year old Jed Stanbury stopping his drinking and skirt chasing.

The rebuild took time; in 1720 the church was judged to be severely in need of repair and restoration but the tiny parish had little money. The Rural Deans, who inspect churches and keep parishes on their toes, were on Luffincott’s side and one pleaded with the church court about their poverty

‘… So that they can’t undertake so great a work without the utmost Inconvenience and Manifold Prejudice to themselves and their families.’

Time was given and there two date stones on the church, 1761 and 1791, the latter for the tower. There has been other work on the church since, notably in 1992 when the Churches Conservation Trust carefully and lovingly conserved it using traditional building techniques.

The West Window with its eyebrow.

One of the northern sash windows, a definite rarity in churches.

Wandering around, there are some good windows. The left hand one is in the tower and is such a utilitarian piece, with its beetling eyebrow of a hood mould. The tower is coated in lime plaster, the granite window surrounds left bare and does not this just bring out the very Devon stone?

This is a traditional design when using lime plaster, the rougher stone covered and protected, the good stone displayed.

On the right is a Georgian sash window… as rare as hens teeth in a church and, well, why not use these? They wanted light, they knew how to build sash windows, they had very little money for a stone mason and Bob’s your uncle.

Mind you, note that the sash windows are on the north side, the hidden, less important side and the south side had the traditional stone ones on the first approach. No fools they.

Indeed, on the south side, they reused the older fifteenth century windows for that added ‘je ne sais quoi’ that every self respecting church needs.

A beautiful fired clay cross, slowly being colonised by lichen.

This little sweetie was part of the minor Victorian restoration on the rebuilt east chancel wall; have a look, if you will, how the deep lines bring dynamism to such a simple object. Thought has gone into this design. Fired clay like the ridge tiles.

The 18th century door, looking for all the world as if snatched from a local farmhouse.

Another solid design is the eighteenth century door, and another wonderful domestic piece. No arched door here, no money overspent, but something that works as well as any other.

It is a door that could have comforted a well-to-do farmhouse and… I wonder… Did Farmer Mudge come back from an evening of beer and scrumpy to find his front door disappeared and a ‘thank you for you donation’ note pinned to the frame?

Not much he could do, especially with folks coming up to praise his generosity at the next service.

The simple interior of Luffincott church

A luminous space to sit and breathe with a light direct from heaven even on a cloudy day, though we do miss the hustle and bustle of church days with all the parishioners gathering and chatting, filling the building with friendship, humour and news before settling down to listen to the preacher man.

As ever in this church, simplicity and magic.

Nowadays all focus is on the modest altar and the almost abstract space surrounding it with the strong, clear lines. These are modern things though, new fangled innovations that are gazed at with curiosity by the ancestors still wandering the landscape.

The benches and altar are Victorian, the time when ritual was reintroduced into the church and communion regained its importance. A big change from the rebuilding in the 1700s when the now vanished pulpit would have been the centre of attention and folk listened intently to long sermons, with biblical texts probably painted on the walls.

Texture, colour and light meet to create an enchantment.

In the present day it is tranquil silence, a chance to be with our personal god, whoever that may be, a painterly room that engages our eyes, ears and feelings to lead us into ourselves, as we choose. A deeply personal universe and a decidedly modern one.

All these uses, all these paths, all this wonder… all these souls…

Oh, and saying ‘hi’ from the eighteenth century are these ravishing roofbosses, reminding us to remember the those who rebuilt this wonder and drawing on the church traditions of their fifteenth century ancestors.

A tad faded but retaining their original colouring with champion carvings of foliage and flowers, leaves at the corners and somewhat abstract flower heads in the centre. Oh my, they have presence.

Here the carvings are embedded into the ribs, not carved from them.

Yet the ribs, look how they were saving money back in the day. I have admired uncarved ribs, I have swooned over carved ribs and I have never seen blocks of pre-carved wood inserted into the ribs. It makes for an arresting design, with the same golden motif repeated in squares against the red background.

It also saves a barrow load of money, saving the need to shape each rib individually.

An approach and one that suits the simplicity of this church so well.

To be fair, the guide says these ribs and the roof bosses are fifteenth century, but they are not (so say I). They are too sharply carved, too classically composed for that Late Medieval work, and I have seen more Late Medieval foliage roof bosses than I dare admit.

The main proof is outside, at the top of the north wall above the sash windows, where we can see the aged remains of the old fifteenth century wall plates (the boards that divided the top of the walls from the start of the curved ceiling), which come from the interior. These still show the full intricate carving that we would expect from roof timbers of that age; very different from the present ones.

They are bonny darlings whatever the century, this is true.

Christ in the East Window

Christ surrounded by fruit that remembers the Garden of Eden

The East window is no slouch either, a fine Victorian figure of Christ with his head backgrounded by a lush fruit tree redolent of the Garden of Eden, the Kingdom of God that he announced.

The granite font, probably from the 15th century.

And lastly the font, a lump of granite because who needs fripperies for God’s grace, a timeless piece that could have been created at any point in the last one thousand years. It is a match for church and landscape, neither of which seem to have much truck with time, merely for existence and the infinity of the universe.

Deep silence lost in a universe of beauty.

Come sit awhile, closing your eyes as you will, feel the silence, hear the light, see that infinity streaming through your world.

Retreat refreshed, as you might, awash with the delight of life in the slow lane; this is a potent church, an intoxicating landscape.

A beauty to rest our soul.