Loxbeare Church of St Michael and All Angels Description 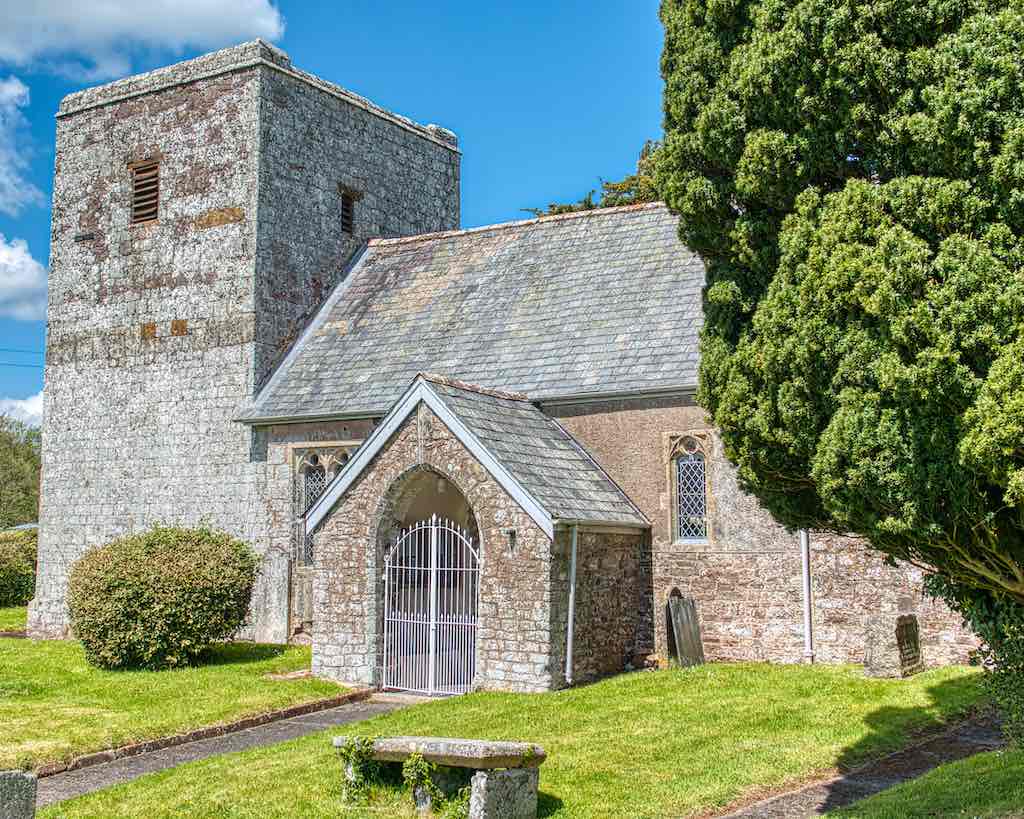 A small parish in north-east Devon, a minor note in the grand symphony of Devon churches but, like all minor notes, a dollop of beauty that would be missed if not here.

As a parish, there just is not a lot of information about it aroundabout, and reckon that is the way they want to keep it. I know I would.

Peace and quiet is priceless. 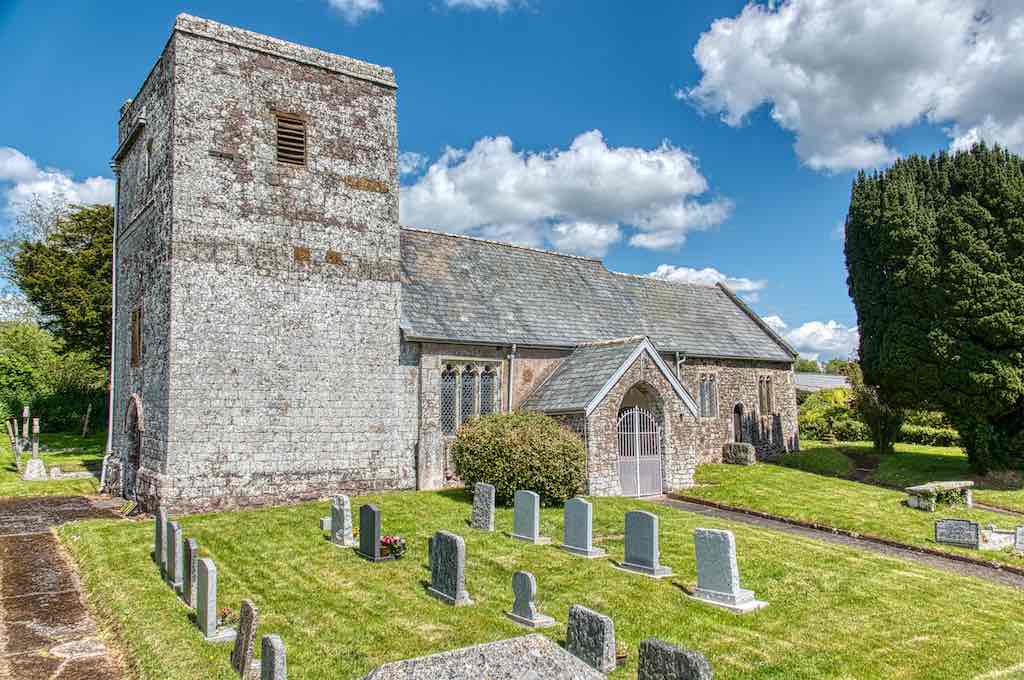 The church has a magnificent old tower, possibly twelfth or thirteenth century, very rare for Devon, though there has been renovation and it is impossible to pin an exact period onto it. What we can say is that it is not Perpendicular as most towers are down this way.

It is a nice and chunky, from a time when towers had big biceps and stood in the church yard flexing them. I like Perpendicular towers, of course I do, but if one wandered into this hood it would be put into a double arm lock within seconds.

The stunning Norman doorway, such a rustic and rambling beauty.

Not just a spectacular twelfth century rustic Norman doorway but also a mighty old door to go with it; a cracking combination, especially with the use of that local red stone.

The decorations are somewhat clumsy chevrons, even on the tympanum, the kind of semi-circular area above the door which should really have a figurative carving. Speculating, it was maybe carved by Saxon stone masons who had seen this kind of thing but were not really on top of the skills yet. This happened for sure elsewhere.

There is a little mystery here too. On the keystone on the interior doorway there are these words carved: “AILMAR FECIT DOMUM” (according to John Stabb: Some Old Devon Churches, 1908-1916) which means ‘Ailmar made the house’, Ailmar being a Saxon name.

Now around 1066 according to the Domesday Book a number of Ailmars (with various spellings) held manors in this area, but they all disappeared afterwards, the Normans performing their ‘All Yours is Ours’ dance, very effectively too.

So did a Saxon thane build a church here originally? In which case, why the Latin and not Old English? Well, quite likely the only literate person around was the priest, and he could have supplied the Latin, not very good Latin at that which is what we would expect from a local priest way out here in the boondocks.

That would mean that there could well have been a Saxon stone church here before the Normans, who reused the stones. Possibly even more likely if Saxon stone masons had been put to work on this little place.

Or was this stone robbed out from another kind of Saxon stone building, but again, why the Latin?

Or totally off the wall here, does the stone go back to one of the pre-Saxon kingdoms, who did use Latin around here… but then why the Saxon name?

Or, least likely I venture, is it just a fake? Cannot see a point to that, me.

If I was a betting man, which I am not, I would go the Saxon church route, a little stone church or chapel built by the thane for his household and tenants in the late 900s or the 1000s, which the new Norman lord replaced with one in his tribe’s style, and the old keystone was reused.

A fascinating mystery all in all.

The nave and chancel are early Medieval, possibly on the old Norman church’s footprint…?

A lovely simple church it is inside, just nave and chancel. I like these kind of churches, real back to basics vibe. But of course a Devon church is never simple simple, it will always have treasure or two peeking out of a corner or over a pew whispering ‘See me! See me!’

The altar and east window

Pastel colours and gentle light make this a place to sit in peace for a while.

The first gentle ‘see me!’ call comes from this seductive altar and east window with their beautiful pastels broken up by the Neo-Gothic nineteenth century brickwork and stone arch. Those flowers too!

Nothing to blow our minds away but something just to sit and enjoy for a few minutes and take with us for the rest of the day at least.

The eagle of St John

The winged ox of St Luke

The winged lion of St Mark

The angel of St Matthew

These pretty tiles are on the floor in front of the altar, and pretty they surely are. Symbols of the Four Evangelists, the pictures alone are a charm but what really brings these sailing home is the design around each image with the use of brown and white against the pale yellow. Very striking, in a modest kind of way.

Part of the 17th century west gallery now in the chancel.

On the other hand these are not so much modest as sensational, though maybe in a slightly modest way… maybe…

Likely made in Exeter by an artisan between 1620-1650 they are so very Devon traditional; now in the chancel, forming part of the choir stalls, they come from a dismantled seventeenth century gallery and they so do rock. Have look at one the right way up…

Swooping and swooshing, this interpretation of foliage captures the heart of nature.

Glorious, exuberant foliage, shooting up in dynamic strokes of the chisel wielded like a paintbrush, the movement in this little piece is a wonder.

That thrusting inner central shoot, with the leaves around it curving to and away, and then the diagonals zooming away, with the outer leaves carved with such swooshing curves.

Looking closer, there are even two types of stippling (little punch marks); the main section has half moon shapes, while the outer sections use rounded ones. That surely is attention to detail.

Sometimes we come across little treasures that seem to be just full of the joy of artistry and delight in the skill of creation, and this is so one of those times.

The late 17th century pulpit, for those loooong sermons…

A fetching late seventeenth century pulpit too, modest with it. Seeing a pattern here… ?

The sounding board up top has a very practical purpose, bouncing the preacher’s voice downwards for clarity and to keep all awake. These seventeenth and eighteenth century sermons could go on for an hour or two when the priest got up and running, though in these country areas the main man could sometimes be tempted to shorten them by the promise of good hunting or better feasting.

In the eighteenth century parishes this size tended not to have a resident priest, as they rather objected to the small income it would give them. In 1744 a curate (basically a priest without a parish), a Mr John Gilbert who lived in nearby Tiverton with his mother, was paid £35 per year to look after this and an adjoining parish, which was about the wage of a skilled textile worker.

In 1779 Loxbeare did have a semi-resident priest, who lived in the adjoining parish with his brother, but the tithes were only worth about £50 per year (at least, that is what he told the Bishop… ), which was just over a skilled textile workers wage and well under the £180 per year that a clergyman expected to live on.

So the Rev Abraham, as he was, also had another parish in Somerset, Charhampton, a much bigger one, likely serviced by a curate whom he employed, and which gave him a deal bigger tithe income.

Ah, the delights of a burgeoning consumer society…

Bits and bobs around the church

Stained glass from 1875 probably by Drake of Exeter

In the nave there is this sweeting, a Te Deum window, so called because it uses text from a fourth century hymn (“The holy Church throughout all the world doth acknowledge thee”) called, The Te Deum, after the its first words Te deum laudamus, “Thee, O God, we praise”.

So the composition is explained, with Christ central surrounded by worshippers who are… men. Oh dear, oh dear, even if they are meant to be his disciples it still airbrushes the Marys and Martha and other ladies out of history. Hey ho, sure we all have our own unconscious prejudices nowadays as well…

A very nice window though, in this tiny church…

Flowers and an angel from a 17th century memorial.

Looking closely at details, these are naive little pretties on the monument to Daniel Cudmore who died in 1645. I just love the flowers, and the stone mason who knew that monuments need these domestic touches, so sweet, as is the angel (notice the wings), just a local angel who lives up the road, exactly as should be.

Also there is the unusual nineteenth century font, highly mannered, very polite, the kind of font that would leave you its calling card if you were out when it dropped by. It is strange one to find in this little country church, and seemingly takes it inspiration from a pillar capital, very classical, very of its time.

As ever, with these fonts (and all else in churches) its worthwhile to put our eye on the same level as the main design, where, in this case, the form and the play of light across those sharp lines can be enjoyed.

A royal coat of arms

John Gill of Tiverton painted this George I coat of arms in 1725, as it says in Latin at the bottom, probably using that language to give a touch of class and wallop up the price. Latin was dead classy then, and classy cost. I do hope John Payne the churchwarden (his name is at the top) felt he got his money’s worth.

I for one think he did. That painted framing is particularly good, and reasonably unusual hereabouts, and the ‘GR’ lettering is grand, whilst the whole painting is mighty dynamic with all the feathering and twirls going on, with a fine unicorn into the bargain.

The prettiness of churches

The thing with churches, simple or otherwise, but let us go with simple as this is where we are, is the amount of beauty that does beckon, whispering ‘See me! See me!’ And we just have to open our eyes and ears to look, really actively look, and suddenly we are in a magical wonderland…

Just these tiles, a graceful pattern with gently contrasting colours, are transformed by the light through a stained glass window into an enchanting prettiness, lasting a few minutes, but something to keep in our memories for many a day.

What a gorgeous universe to live in!