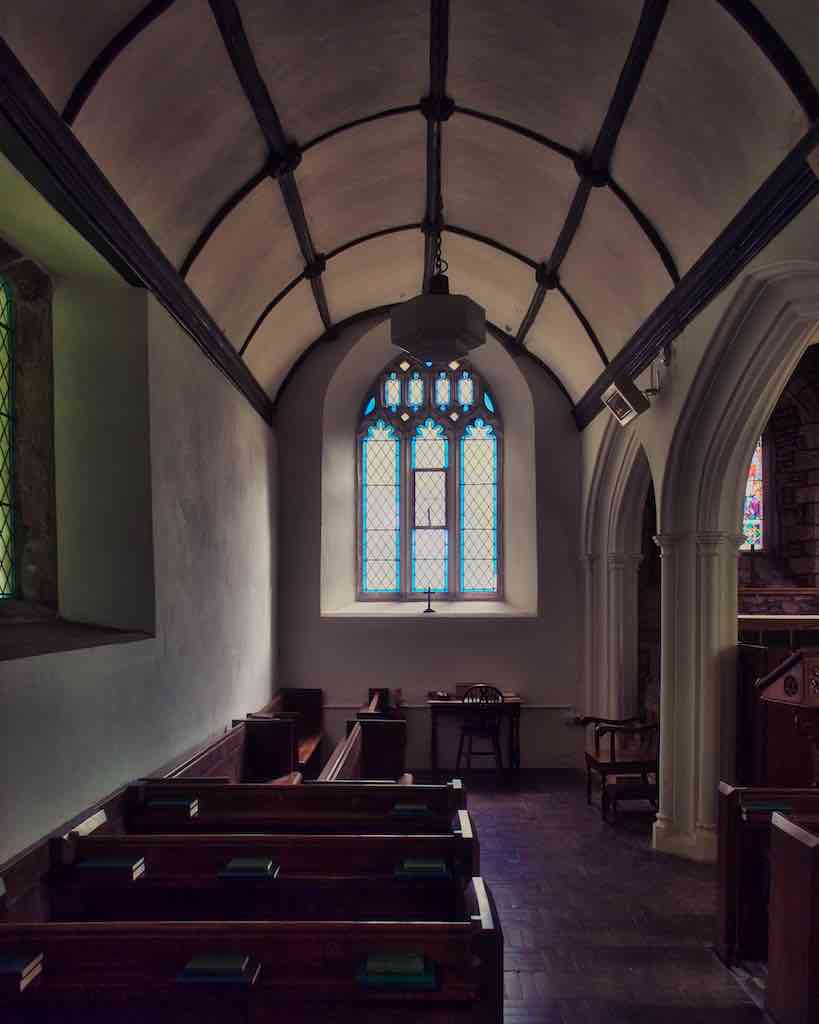 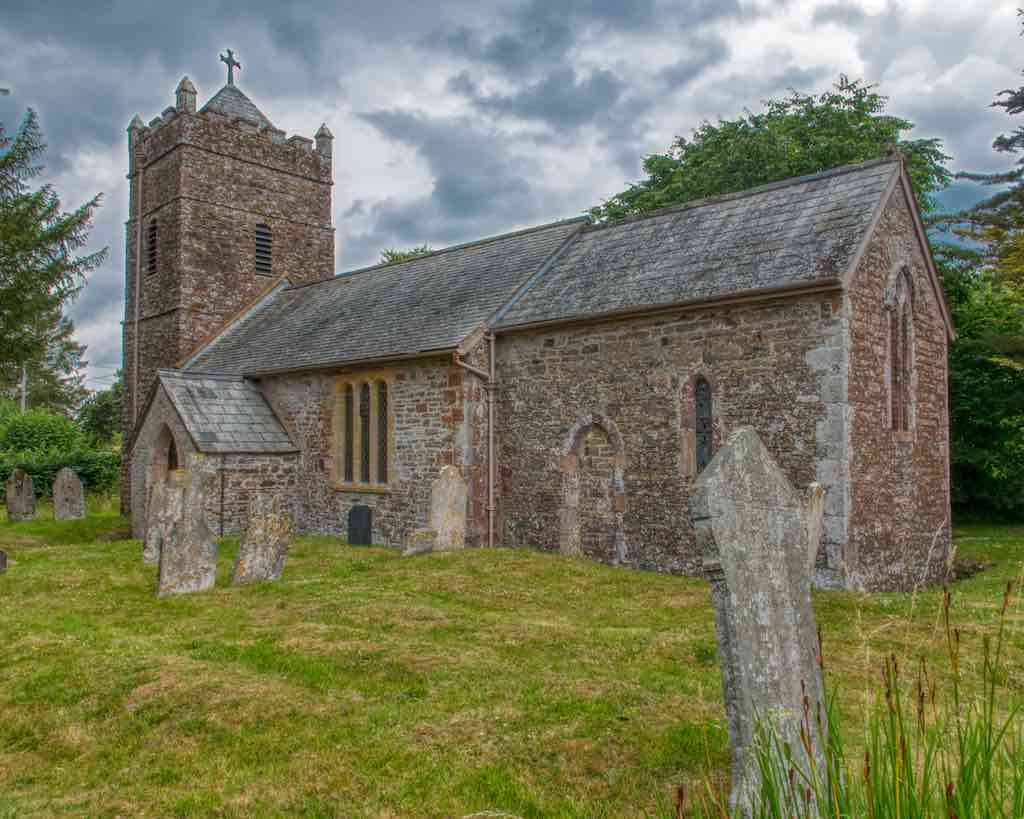 Kennerleigh parish sits on a petite plateau falling sharply to streams on the southern borders, and a wide valley closing the north side of its triangle; springs both water and drain it. Proper farming country.

Landscape wise it seems to form a natural community, but yet the parish seems to have been only created in 1752.

Before then it belonged to Crediton parish, which was immense. Crediton was the main man of Christianity, seat of the bishop and all, before Exeter took over the role in 1050; what Exeter did not get was all of Crediton’s land.

But Kennerleigh is five miles from Crediton, a hard journey there and back on foot even in good weather, and the locals would have been deeply reluctant to make that every Sunday.

The solution was a ‘chapel of ease’ which does what it says on the tin, makes church going easier. These were common in outlying districts of parishes, and the first mention we have of one here is from 1334 when it was dedicated to St Clement (the present dedication to St John the Baptist only dates from the eighteenth century).

Marvellously, it was probably this one, as the chancel (the bit nearest us) is dated from the 1300s along with that tower; the nave in between has had more work done on it since (look at the different stonework) but would have existed then on a similar footprint.

The 14th century tower, what a tough little darling

No porch though (the present one is nineteenth century) and maybe the nave was tad narrower, but here we are, the chapel of ease, with its sturdy tower; look at the grand stonework on this, really solid stuff straight from the fourteenth century.

Now this chapel of ease over time would have obtained the right to baptise the newborn and bury the dead. Why? Well, tragically, a lot of new borns and young infants died, and baptism was considered so essential for the saving of their souls; carrying them over rough tracks for five miles was not good, not good at all.

The same for corpses, especially in winter, though here the problem was for the carriers.

But the tithes, that ten per cent ‘tax’ on all income, cash or produce, always went to the mother church at Crediton and the Kennerleigh community paid for their chapel separately.

That is not to say that all the folk calculated their tithes to the exact amount; let us be serious, we are talking Devon farmers here, who have been living in abject poverty surviving on mud and ditchwater since the days of Adam and Eve (according to themselves alone).

So Crediton wanted to keep them under its wing. Though it is easy to think ‘Aha, money’ but these were priests, and it was they could do with the money that they considered important, whether to help the poor, pray for souls or all the other Christian ways of love.

Though the building is all we see today of yesteryear’s faith, and it is a little charm.

This part of the chancel could well be fourteenth century work, with that more even stone at the top laid later, probably to raise the walls. Lovely to look at too.

No idea when or why they blocked the priest’s door though.

The stonework is Victorian renovation, the door is 17th century

The south door, the main entrance, is a fun seventeenth century creation and looks its age in the best possible way.

Old wood, still in use, always a goodly sight.

There is a lovely neatness inside, combined with the soft lighting that creeps through the shaded windows and gently paints the browns and whites with glowing shades.

A beguiling, precious space; churches are enchanting spaces for light to totally flirt around and about.

Or even to turn simplicity into wonder with a shaft of shadow.

Here the shaded glass brings out the shapes, textures and colours all around it. A beautiful, modest space, as this old chapel-turned-church is.

A very nice limestone font, medieval through and through

The fifteenth century Beer stone font is another fine example of white and light waltzing together. Delightfully carved, the underside of the bowl seems to be nestling into a thick layer of foliage while symbolic leaves entertain its sides.

Somebody invested a load of money into the one, and was it purchased to celebrate the getting of the right to baptise? Speculation but not impossible.

Shades and muted colours in the peaceful nave

Looking around the nave, breathing the soft atmosphere, the quiet colours envelope us and the shapes… oh my heart, those shapes. The simple pillar, the elegant arches, the lines of the benches, any harshnesses soothed by those shadowy browns, with a background of mild light through humble windows.

I could sit here all day watching all the tiny changes drift across the interior, each one revealing a new wisdom, a new space, even so only a few of the myriad aspects of the Divine.

But what aspects! What Divinity!

And the theatre continues in the chancel, a tiny cell, thick walled, half lit, probably unchanged from the 1300s apart from the lack of plaster – or was the very first version plasterless? And that carpet, just the kind of colourful textile that medieval folk would have appreciated.

A Eucharistic space for sure.

Medieval roofbosses in the chancel

Roof bosses with original colouring in the chancel

On the chancel ceiling are this pretties, original roof bosses probably from when they refurbished the church in the later 1400s and put in the north aisle, still with traces of their original colouring.

It is possible that the red is an undercoat for gold or silver gilding, long since gone; gilding down in Devon was done with a base of red from local pigments.

The Demon Titivillus keeping tabs on the congregation

Though it is in the nave that the boss of bosses saunters onto the scene. Is he not a beauty, with that explosion of leaves behind himself, big eared, big tongued, big eyed? Nothing escapes this ugly demon; he most surely is not no human.

Which is the point, because he has a name, Titivillus, and a role and also a fascinating possiblity about him, though somewhat speculative.

“I am a poure dyuel, and my name ys Tytyvyllus … I muste eche day … brynge my master a thousande pokes full of faylynges, and of neglygences in syllables and wordes.”
“I am a poor devil, and my name is Titivillus… I must each day… bring my master a thousand bags full of filing and of negligences in syllables and words”
The Myroure of Oure Ladye, 15th century

Titivillus started out as a demon collecting the mispronunciations (of the Latin) and writing mistakes of monks, nuns and priests and taking them to his master the Devil for to put in his database of individuals’ sins.

Mind you, the actual mispronunciations and stuff were not the sins, they were signs of inattention, of not taking the sacred texts seriously enough, maybe of greed to finish the book and sell it, of pride… each individual would have their own.

The reason sins were ‘bad,’ is that they took folk away from the Divine, from the divinity within as much as without; after all, ultimately we are made in God’s image, and everything that helps us forget that, well, that is what sin is, not a guiltfest but a sorrow.

Repentance, understanding and committing to change, would get their sins wiped from the database. Think of Christians as the first hackers, gleefully owning all the Devil’s passwords however fast he changed them and with God on their side.

More 15th century roof bosses, the same age as the Titivillus one

But this demon, along with these banging foliage bosses (my are they not masterful) is in the nave for the folk who did not speak Latin and write big manuscripts.

But they did jangle, holy moley did they jangle.

‘Jangling’ is usually translated into Modern English as ‘gossip’ but it covered far more than; sure it consisted of idle talk, tale-telling, back-biting but it also included boasting, news, bawdiness, flattery, hypocrisy… all the nasties a tongue can do. The ‘Sins of the Tongue’ that they were called.

And old Titivillus listened intently to all the jangling, with those humongous ears big enough to catch even a hushed whisper, caught the words in his sack and updated the Devil’s database regularly.

So this boss could be a reminder for folk to evaluate their sins and repent, for their own good, and/or to warn about the Sins of the Tongue.

But there is more too. At around the time of this boss’ creation, in the latter part of the 1400s, there was a popular Morality Play being performed called ‘Mankind’. This has been called the ‘most theatrically effective early English play’ and is full of bawdiness, wordplay, humour and audience interaction.

More importantly for our story, it could be performed by a small travelling group of five of six players with only a few props; most Morality Plays of the times needed scaffolding, a huge cast, lots of props and more.

Who foreshadows Shakespeare’s Puck, Petruchio, and perhaps Falstaff, is the “star” of the show for all of his trick­ery, wild dress, and humor.
Mankind, Introduction,  Kathleen M. Ashley

was the main character in the play, tempting the hero, Mercy, off the straight and narrow into sin, with the help of his four allies the ‘Worldlings’.

Titivillus was introduced as a

“man wyth a hede that ys of grett omnipotens”
man with a head that is of great all-powerful
Mankind, line 461

So one of the few props was a big colourful mask for the man himself. Like, say, oh guessing wildly, a certain roof boss in a church in Devon, Kennerleigh to be exact.

If it looks like a mask, and if it quacks like a mask… sadly it does not mean it is a mask, but as it is the only figurative boss in the church, and I cannot remember a single similar boss in Devon, we might wonder whether it was inspired by a performance of the play, maybe by a wandering troupe of actors?

Even it is not a mask, which I so want it to be. Though there is a theory by an expert far more knowledgeable than me whose name I forget that some of these roof bosses were old masks. Or at least based on them.

It is not that I am wrong, which I likely am somewhere or more than somewhere, but it is the right kind of wrong and definitely the fun kind of wrong. I can roll with that.

And the play shows what a well known little demon Titivillus was.

How to paint with light part 3

So getting away from devils and demons and back to the Divine, this aisle east window is a gorgeousness. That blue, the shading, the little cross, after all the kerfuffle with Titivillus it is a pleasure to get back to the core of this church.

Because wandering and gazing around this little chapel from the 1300s that has grown into a little magical church of the 2100s, and finding love, now that is thing or three.

The copper cross above

The copper cross on top of the tower

And wandering outside again, glancing up at the top of the tower this graceful copper cross blesses the parish with its elegant curves; a simple design done so well, the kind of design that looks easy but so is not. Wonderful.

And no less than this magical little church deserves.