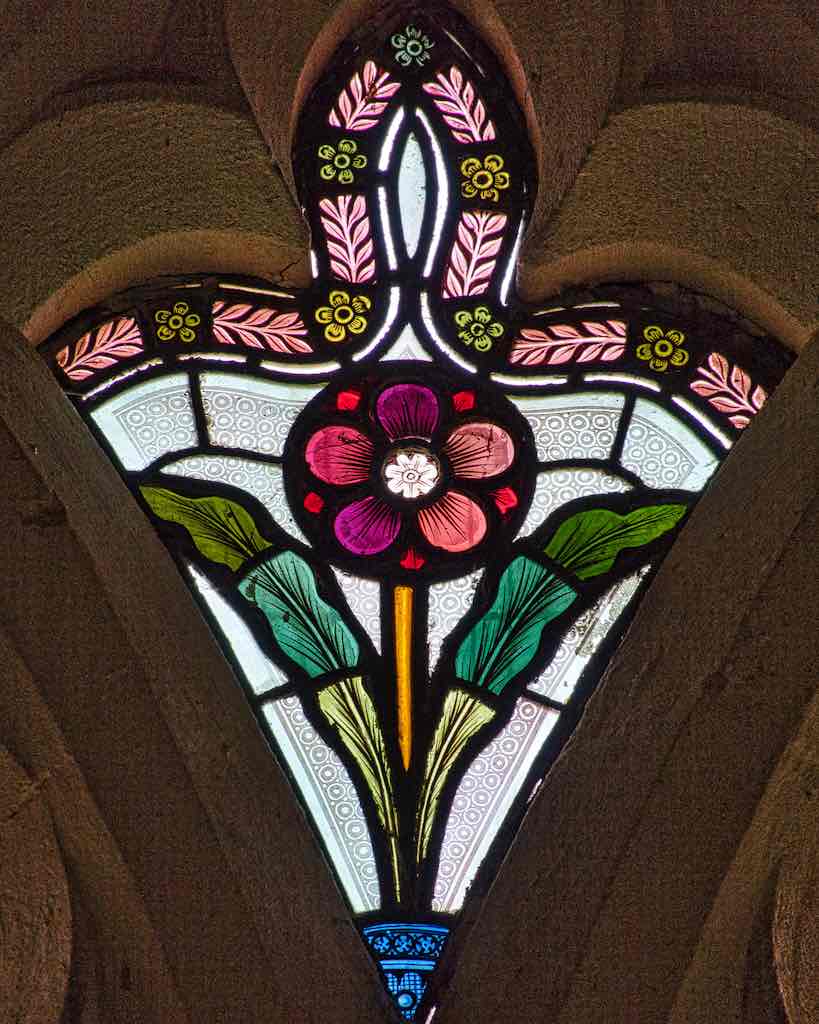 Instow Parish back in time 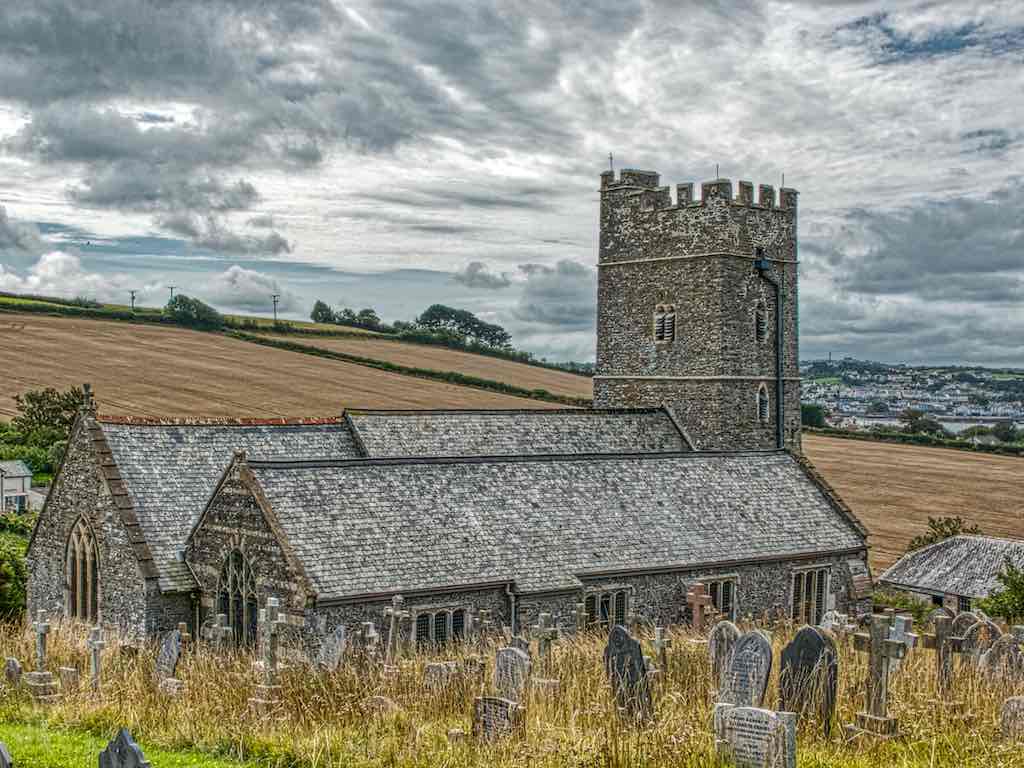 Instow Church of St John the Baptist sits where the Rivers Taw and Torridge meet, near their final exit to the sea

The graveyard is the giveaway. Deep, rising high above the road and starting to envelop the church, folk buried here, one on top of another on top of another; this is ancient ground with many dead

Next the name. Nowadays the church is dedicated to John the Baptist, but before it was just John.

The place was called Johanneso(u), the ‘holy place of John’, and was not about that camel-coated baptiser but about John the brother of Nectan, the Nectan who was a Celtic saint and who planted a church along the coast at Hartland.

“In a certain town next to the River Torridge rests the Blessed Martyr John who was beheaded on one side of the river. Taking his head in his arms he made his way across that river… in each place a church is held in his honour”
Leland, Collectanea, iii, 408

And sure enough Instow lies on the River Torridge and just across it, in Northam, used to be a Chapel of John. And just across the River Taw, which Instow also lies on, was St Brannock’s church at Braunton, another Celtic holy plantation.

But was there a church in very early days, around 600 AD give or take, here on the shores of the Torridge and the Taw? 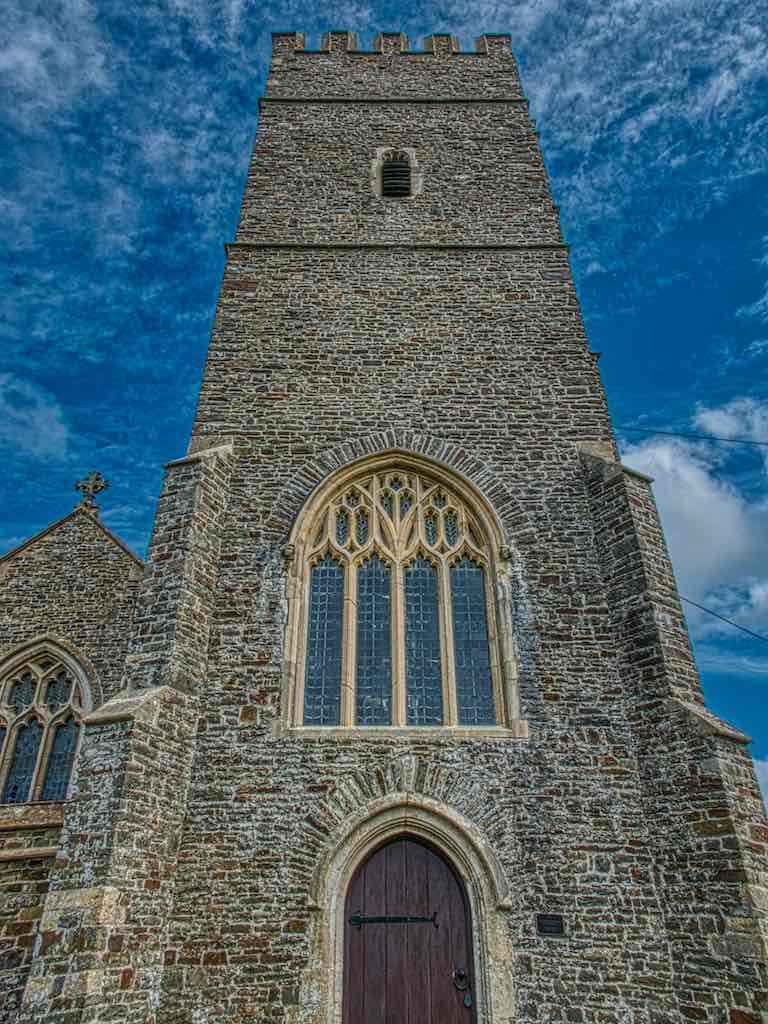 Most of the present church is late 15th century

It is a moot point, as the graveyard is not oval as so many Celtic ones are, and it is in full view of the sea. The Celtic churches seem to have liked their churches tucked away up creeks and rivers, out of sight of the nasty slavers who roamed the oceans (yes, Ireland, very much looking at you).

But Instow lies where the Rivers Taw and Torridge join hands and slide out to sea, through shifting sandbanks and over one of the most dangerous entrance bars in the country, only navigable two hours each side of the high tide.

Where sailors drowned, and sadly still do, washing up on the estuary’s shores.

A liminal pace, bordering water and land, and life and death, a place of care too, for the drowned and the shipwrecked. And the Celtic church was mystical, harsh and mystical, it lived in the borderlands.

This church was rebuilt in the late fifteenth or early sixteenth century. It is a handsome beast magnified by its marvellous siting looking out to the sea. In truth it was probably an essential landmark for sailors navigating these treacherous waters, especially if lime washed white as so many churches were.

Maybe here is the clue. Maybe it was built partly for that, for the saving of both souls and the physical, the sailors and the fisherfolk, by the Celt or Saxon church.

The south door and the church of care 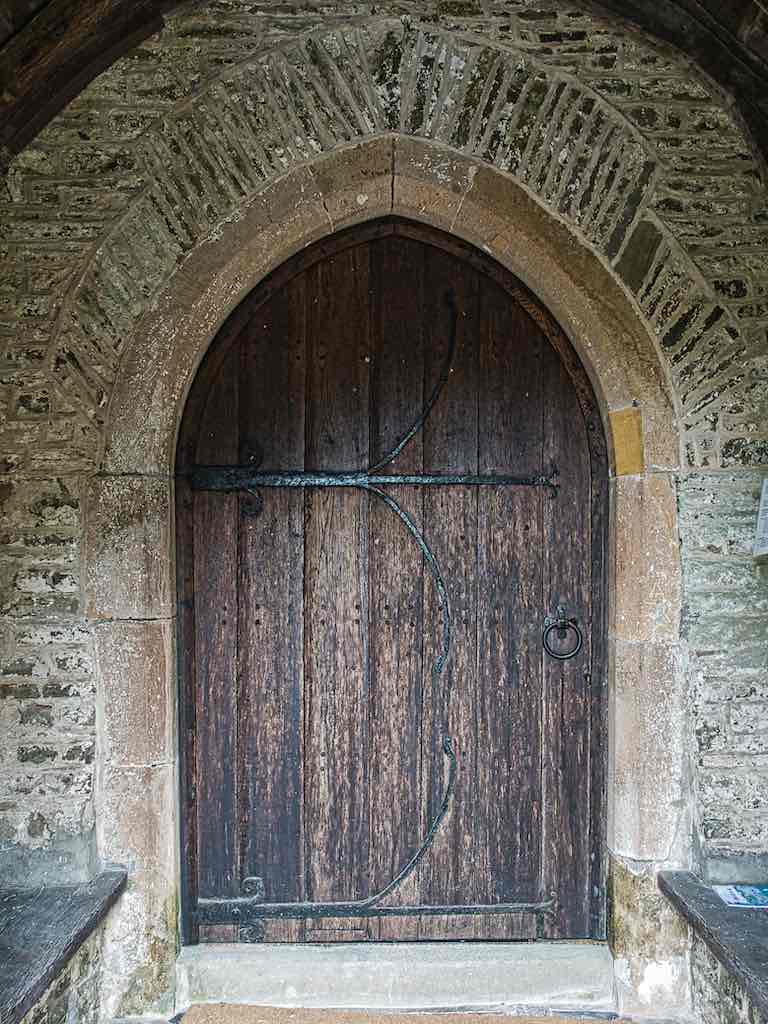 Those leaping hinges on the south door

And that is what medieval churches were; not just marvellous buildings full of faith and beauty, though they were that too, not just the community of the parish, but a place of care of all, strangers as well as parishioners, physical as well spiritual.

So this medieval doorway, with its nineteenth century door and its hinges curving like the leaping dolphins in the estuary below, was an entrance to a place of faith and the outlet for the compassion, care and guidance that was its whole reason of being

You shall love the Lord your God with all your heart and with all your soul and all your reason. This is the first and great commandment.The second is like it: You shall your love your neighbour as yourself. All the Law and the prophets depend on these two commandments”
Matthew 22 37-40

Jesus was quoting Leviticus in the Old Testament here

… And you shall love your fellow man as yourself. I am the Lord.
Leviticus 19 v18

So this went way, way back.

Priests were expected to donate part of their income to the poor, the parishioners also joined in with great enthusiasm, creating organisations that helped all, in their wills, donations and fund raising (a good booze up sometimes came into this), care was in the community. 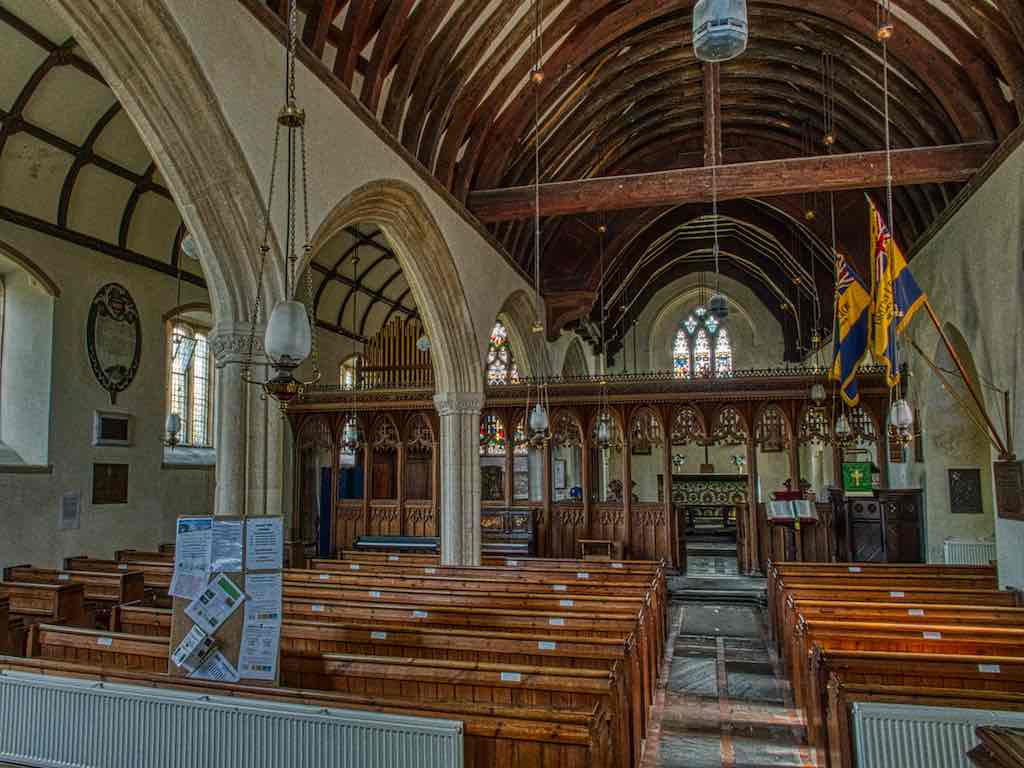 Instow church with the old and (relatively) new

The inside has been well partied up by Victorian and later renovators, that screen is early twentieth century, the whole is now a pleasing combination… well, hand on heart I cannot say those 1970’s radiators bring a huge amount to the party except for heat.

Mind you, in a Devon church in the winter (or autumn or spring come to that) best not look this gift horse in the mouth.

The inscribed pillars and the north aisle 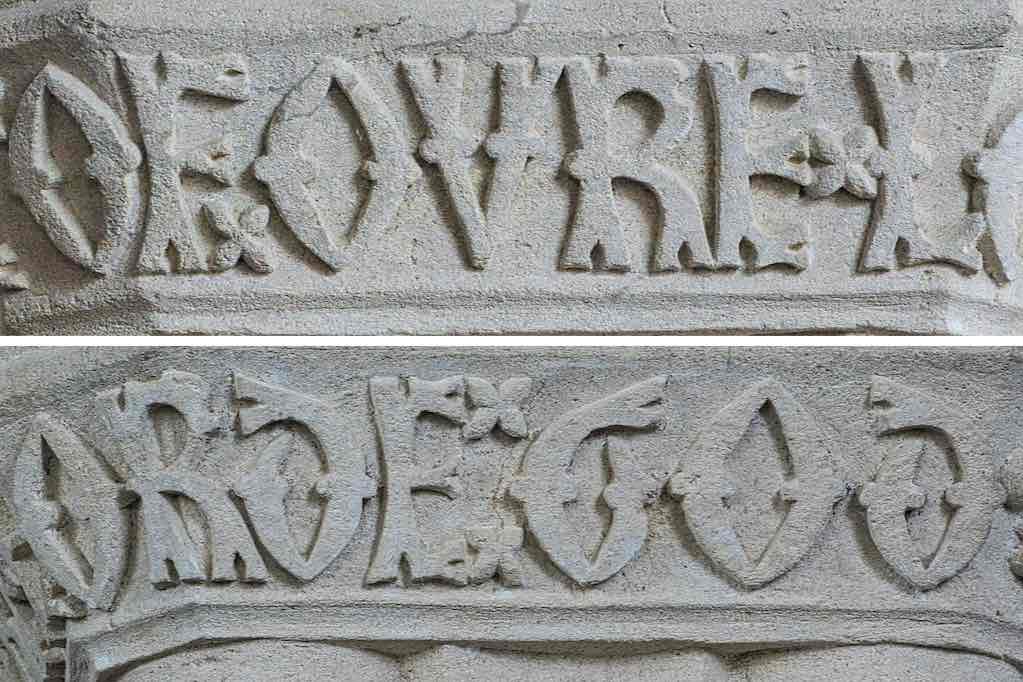 And there is a deep rarity here.

The aisle was built in 1547, paid for by one family and commemorated in these carvings on the pillar capital

There are levels here. This carving on the pillars, quite likely there might be one or two similar in the country, but definitely not many. Here you can make out ‘of oure Lorde God’ in some carefully spaced lettering.

Then there is the actual building of the aisle. The Reformation had slouched into town, trailing blood and plunder from its robes.

Keeping to the old ways was not only discouraged, it was downright dangerous, big fines, social shaming and worse dangerous. The men with the guns said so.

Churches were stripped of all their finery, looted and defaced, and really there was not much point in building anything new.

So this aisle is quite an outlier, especially as aisles were not called aisles, they were called alleys; alleys for processing along on High Days and Holy Days, when the Roman Catholic liturgy called for processions and pageantry. Very called for. That was possibly the main point of building the alleys.

So this was quite a brave thing to build, even foolhardy some might say. And even though Henry VIII died in 1547 things were only going to get worse. 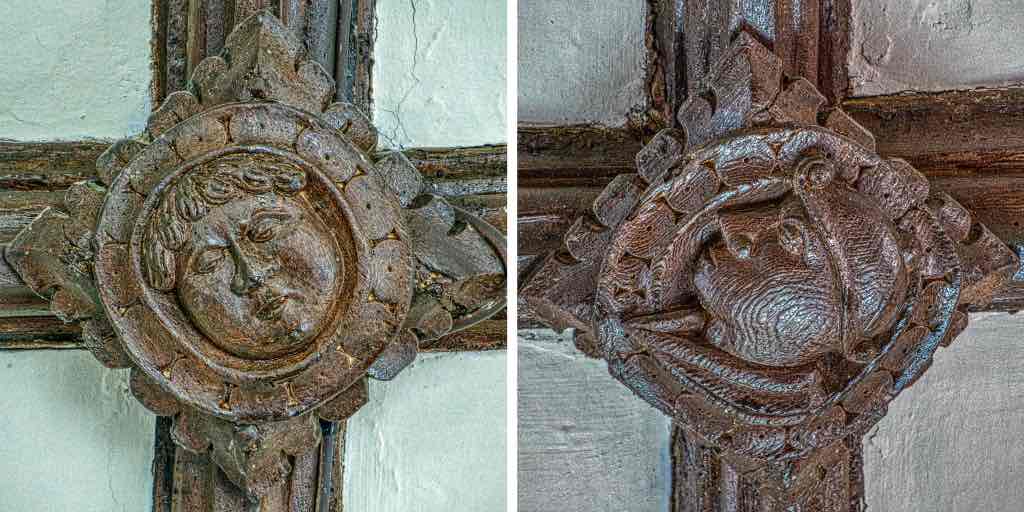 Very much early Devon Renaissance style are these

And then there is the actual inscription. Whilst it does not say ‘pray for our souls’ because that would be too Catholic, it is still a nod and wink to the same.

But up above the aisle roof bosses play it safe. No religious imagery as seen on so many earlier roofs in Devon, nothing to displease their new Protestant masters, just these Renaissance style heads and foliage, carefully decorative only. Usually these kind of carvings are on late-stage rood screens, hardly ever up top.

And they are a bit of alright too, are they not? 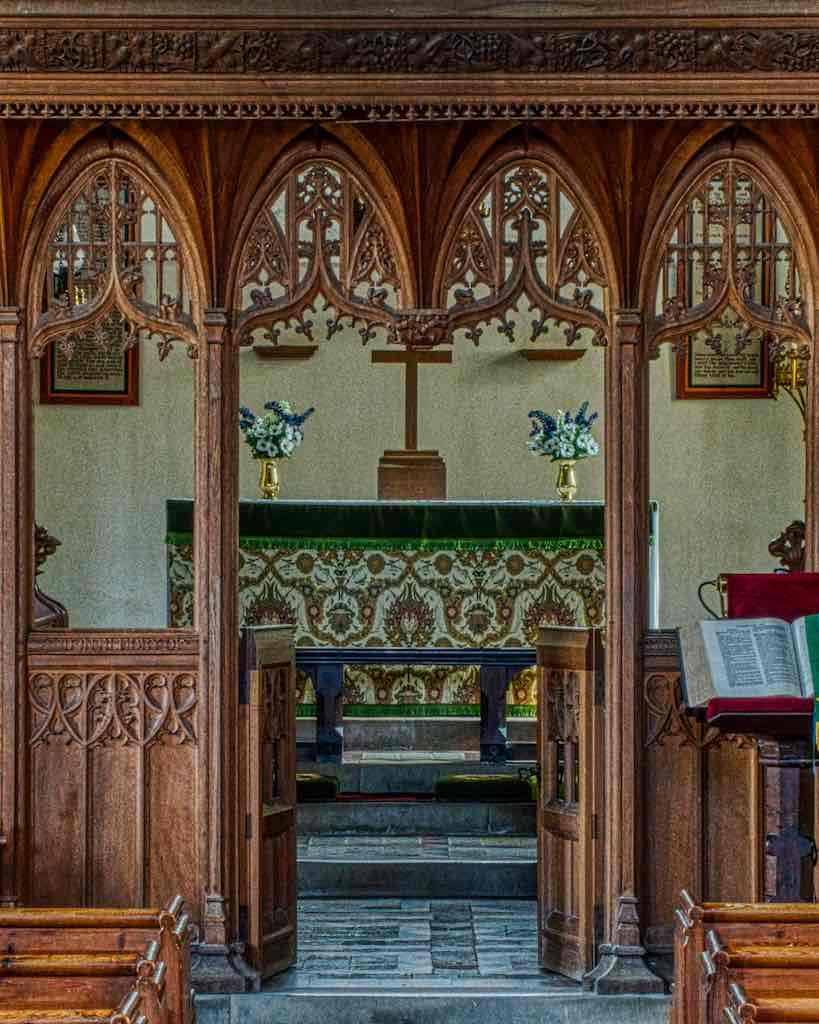 Back in the twentieth century the screen was built in two stages a few years apart, this central section in 1906. It is a nice little thing, rhyming with medieval screens yet not copying them, and the chancel behind is a modest space. 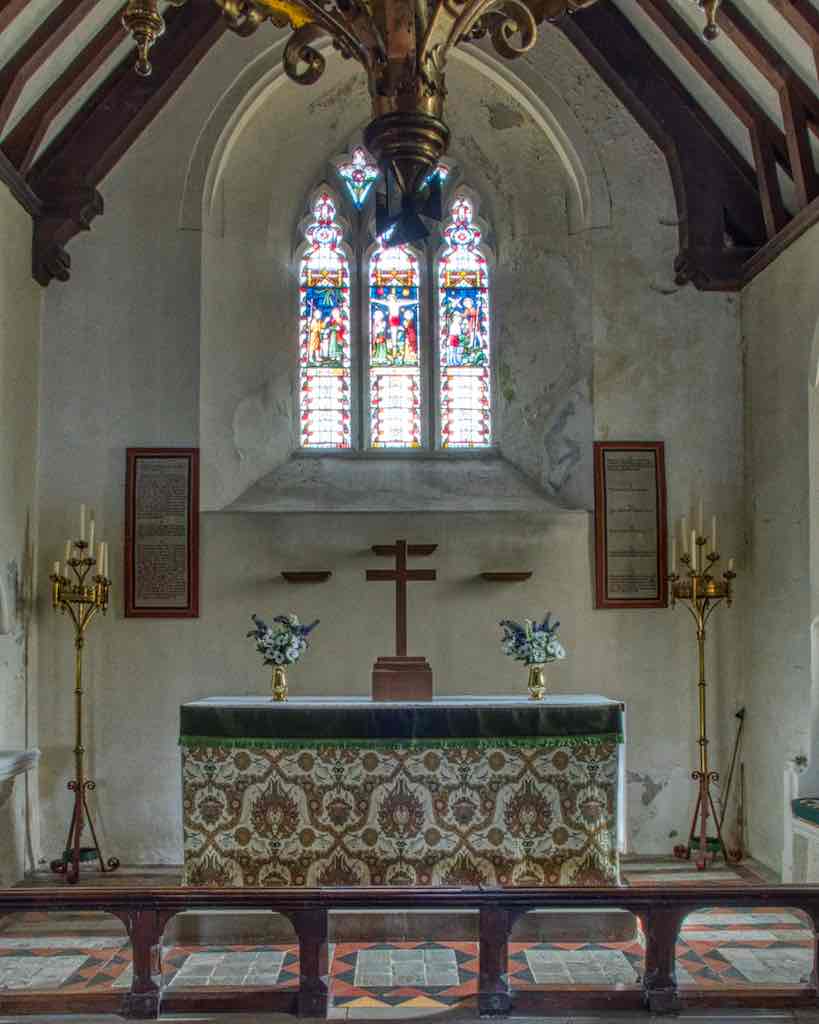 Simple and modest, lovely with it

As we see here, neatly tidied up in the nineteenth century and further so in the twentieth. Sometimes a simple space is all we need.

And here, looking at this floor tiles, simple was likely the aim from the get go. A beauty too. 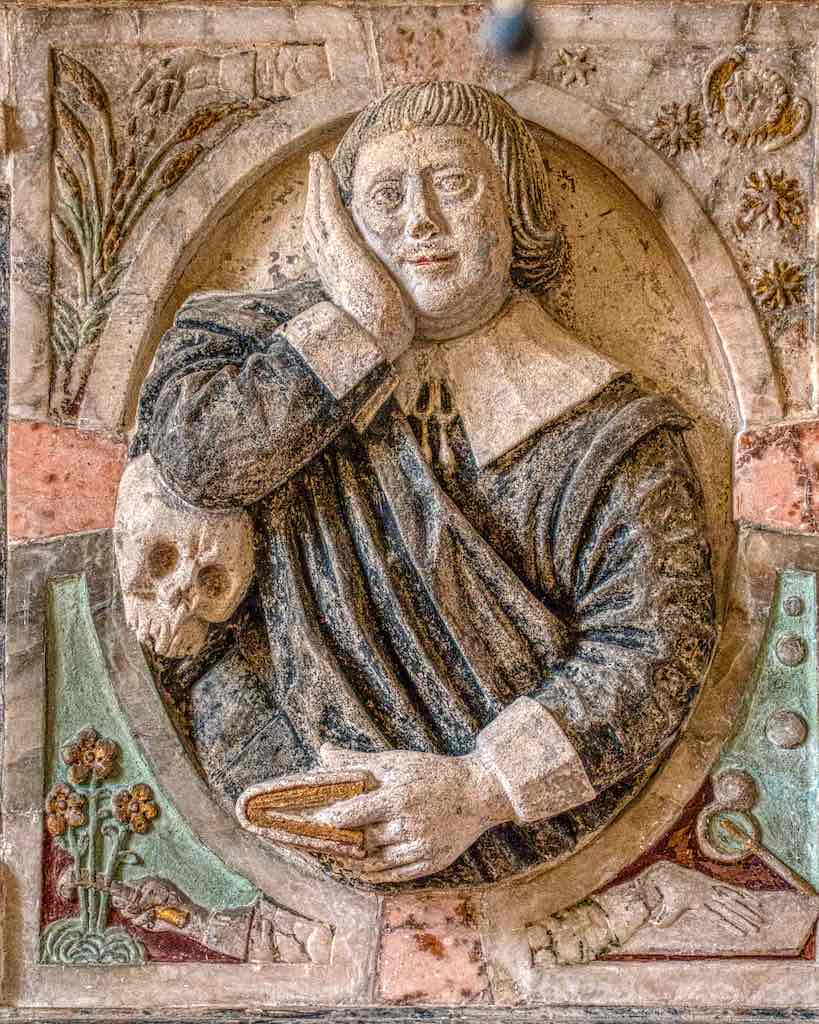 Another beauty is this memorial, to a young lad called John Downe who died in 1640 whilst studying at Oxford and was likely to become a priest; his Dad had been priest of Instow for twenty seven years before he himself died in 1631.

He is a characterful laddie, with his burgeoning multi-chins and contented smile, goodly tempered and even mannered seemingly. A fine representation still with the original colours.

But here is the thing… it is a reused design, this central bit almost exactly the same as a memorial in Barnstaple parish church, just down the road, for another young lad who died before his time. The figure has the same pose too, though the features are different, and the images around the oval are a near perfect match.

So from the same workshop for sure, and a bit cheeky too for all that I am thinking, unless the mother specifically ordered a copy. Possible that, especially as the other one is again the son of a parish priest.

There is only one thing missing which the Barnstaple one has, and that is an inscription around the oval which explains the picture. So here it is, starting from the bottom right and going clockwise:

The days of man (are) a hand’s-breadth and man (is) a bubble.
Just as a flower, as soon as it has come out, is cut down
(but then) returns with profit and bloom
They will shine like stars and they will be as the angels.
(Translated from the Latin)

Now they make a lot of sense. 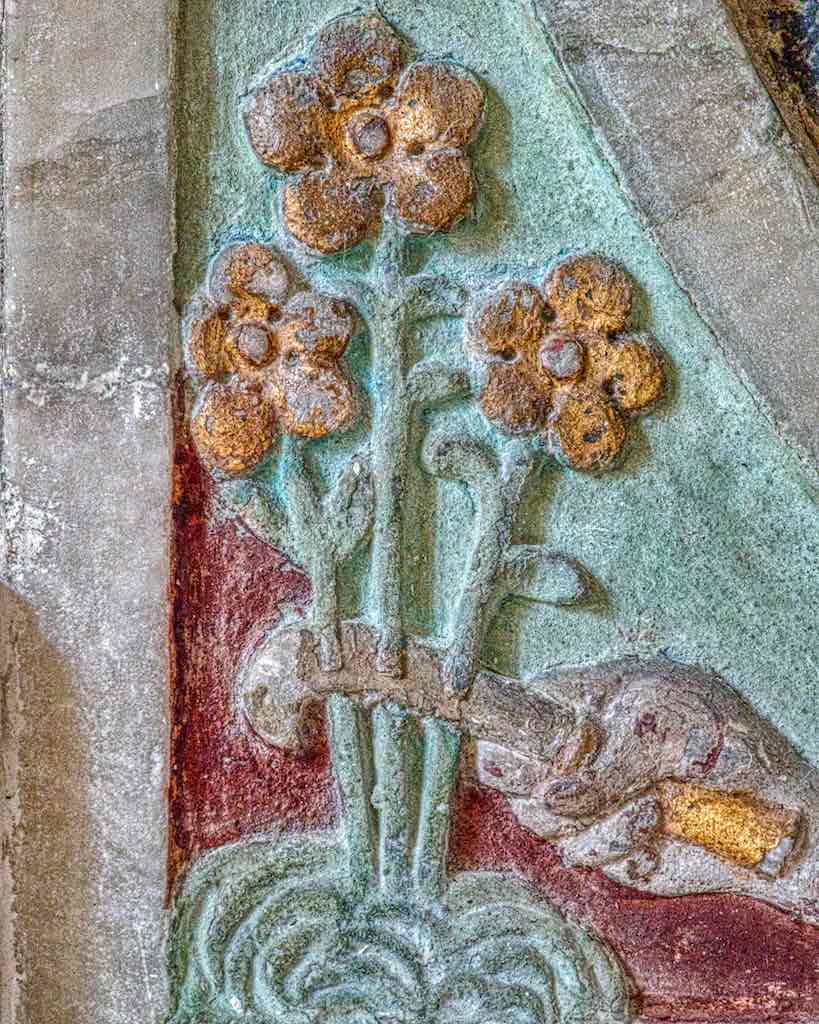 Faded colours on some pretty flowers

And here is the second picture in the sequence:

Just as a flower, as soon as it has come out, is cut down

Naive? Definitely. Not quite Royal Society of Art contender? Who cares? It has charm, it has power, it is direct and to the point and illustrates the text, or vice versa, and besides, those flowers are golden.

Gets my vote any day. 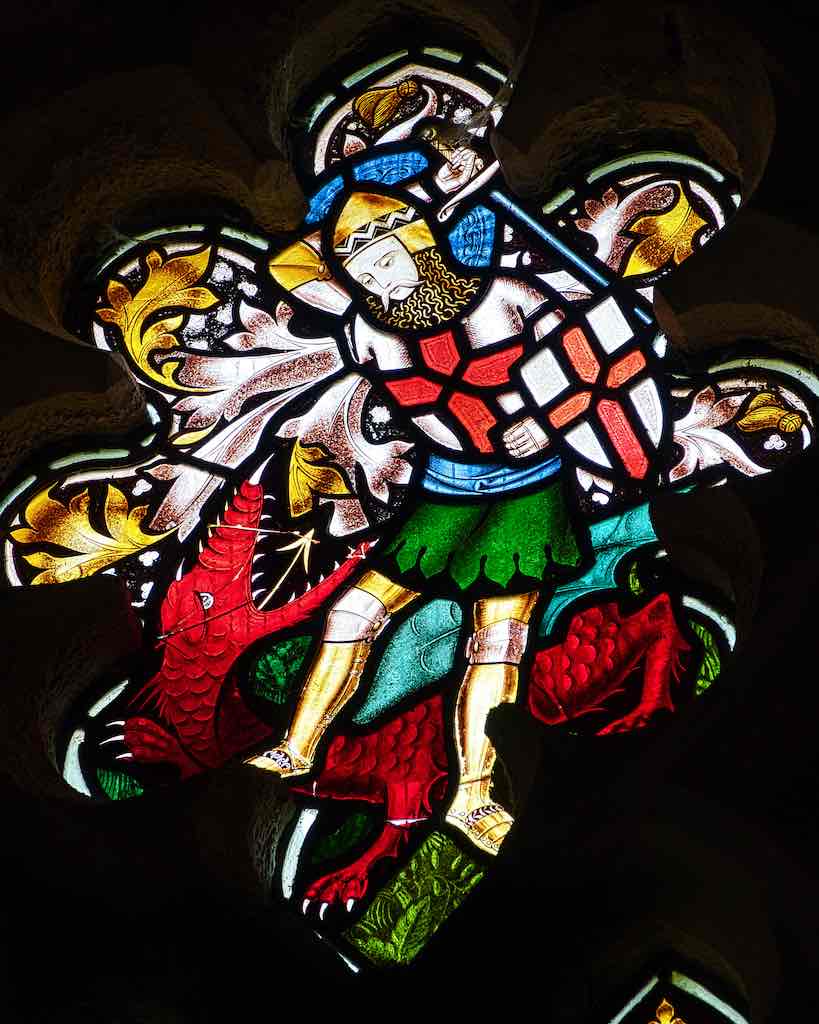 St George having a right ding dong with a sharp-toothed dragon.

As does this tiny scene, way up high in a window, showing St George and the Dragon, one of the most delightful I have seen.

The way that the artist has managed to put so much energy into such a small space, along with the layout of the figures. Then that dragon is mighty threatening, teeth and tongue especially but also the head reaching for George himself. There is a proper dust-up going on.

Then they are standing on ferns, and behind them are what might be oak leaves, for oak trees; this is likely in a wood.

All in all, a bewitching little scene. 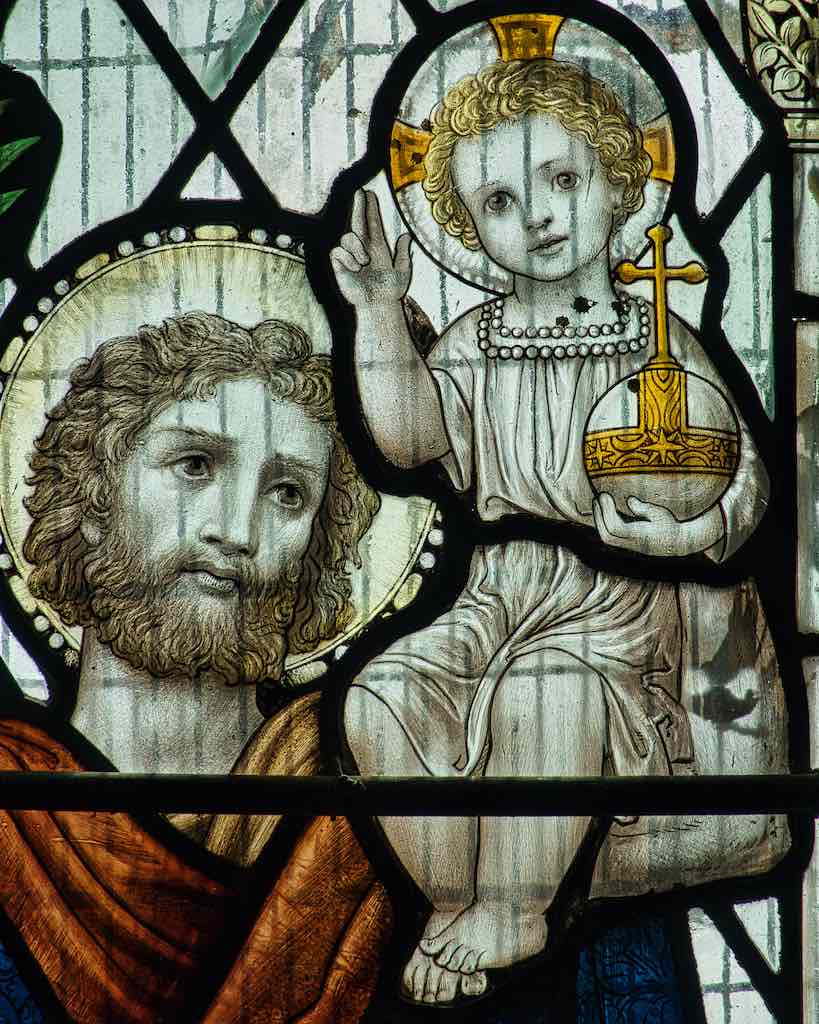 Saint Christopher and the Child Jesus

There is an engaging St Christopher window too, with the Child Christ looking so self-aware as to melt one’s heart.

And there is St Chris himself, already deep in the wonder of the Divine, never again to see the world as he used to. 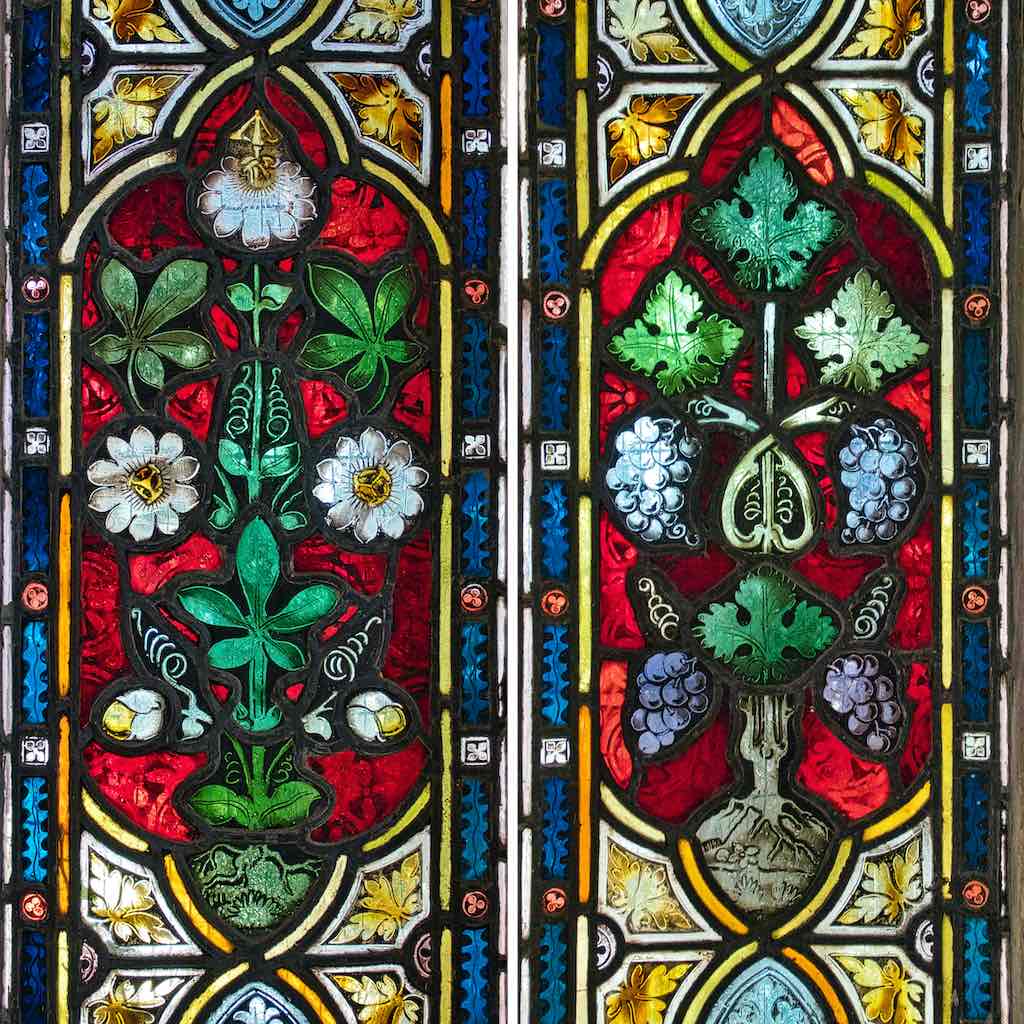 In another window is this pretty Victorian plant life, passion flowers on the left, grapes on the right. That era’s stained glass artists were so good at plant and foliage, they took so much delight in their creation.

The passion flower is a Christian symbol; the inner part, those three bits which are actual the ovary not the stamen, represent the Holy Trinity and also they are shaped like the three nails used in the Crucifixion of Christ. The corona, which is circle of spiky bits radiating from the centre, stands for the Crown of Thorns.

And the grapes are for the Communion wine, the Blood of Christ as well as the fruits of the spirit.

The gentleness in the church 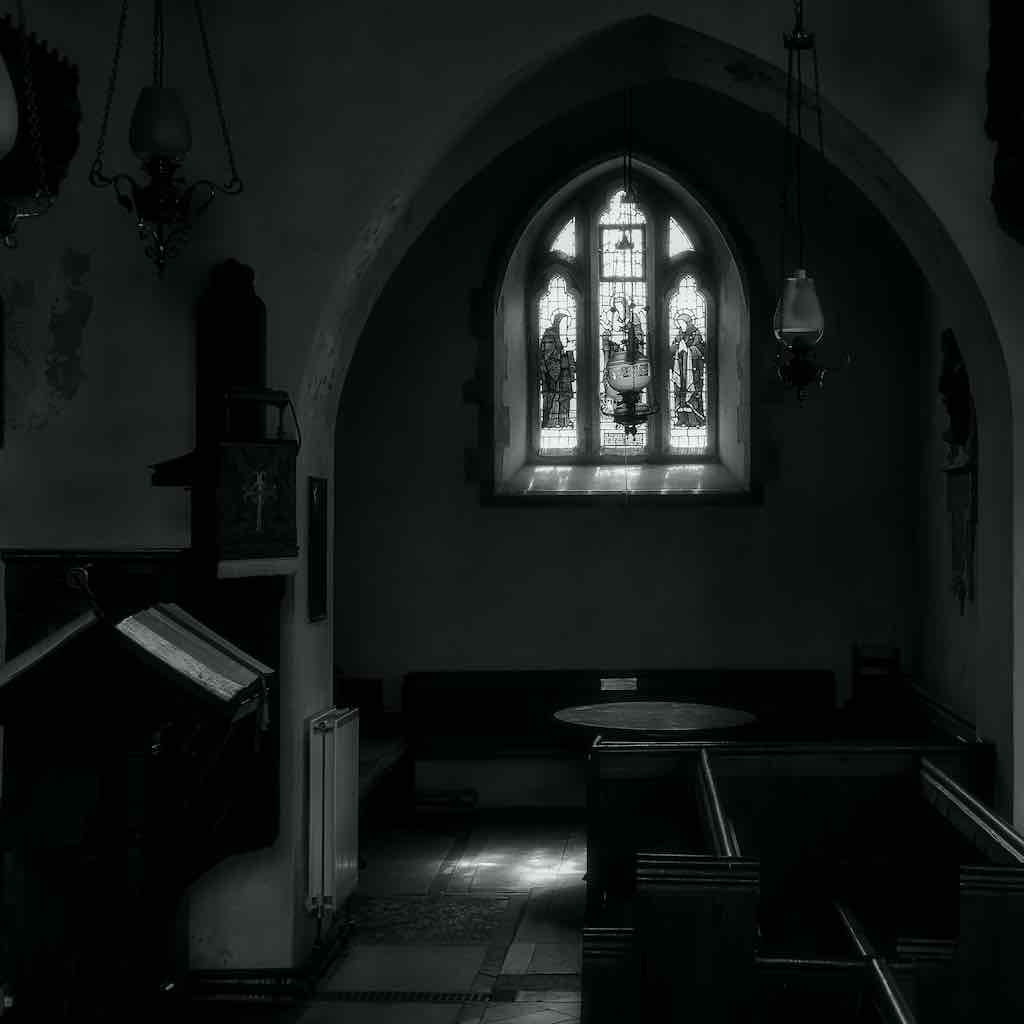 This is gentle church and full of meaning when we look, both historical and spiritual, always presented in a prettiness that is more than enough for some of us.

And then there is this, the breath of that gentleness what whispers through the heart as we let it, a place to sit and be. Somewhere for all, whether we are of faith or not, to breath the possibility of a world at peace and a soul full of love.

A world of love, now would not that be nice?