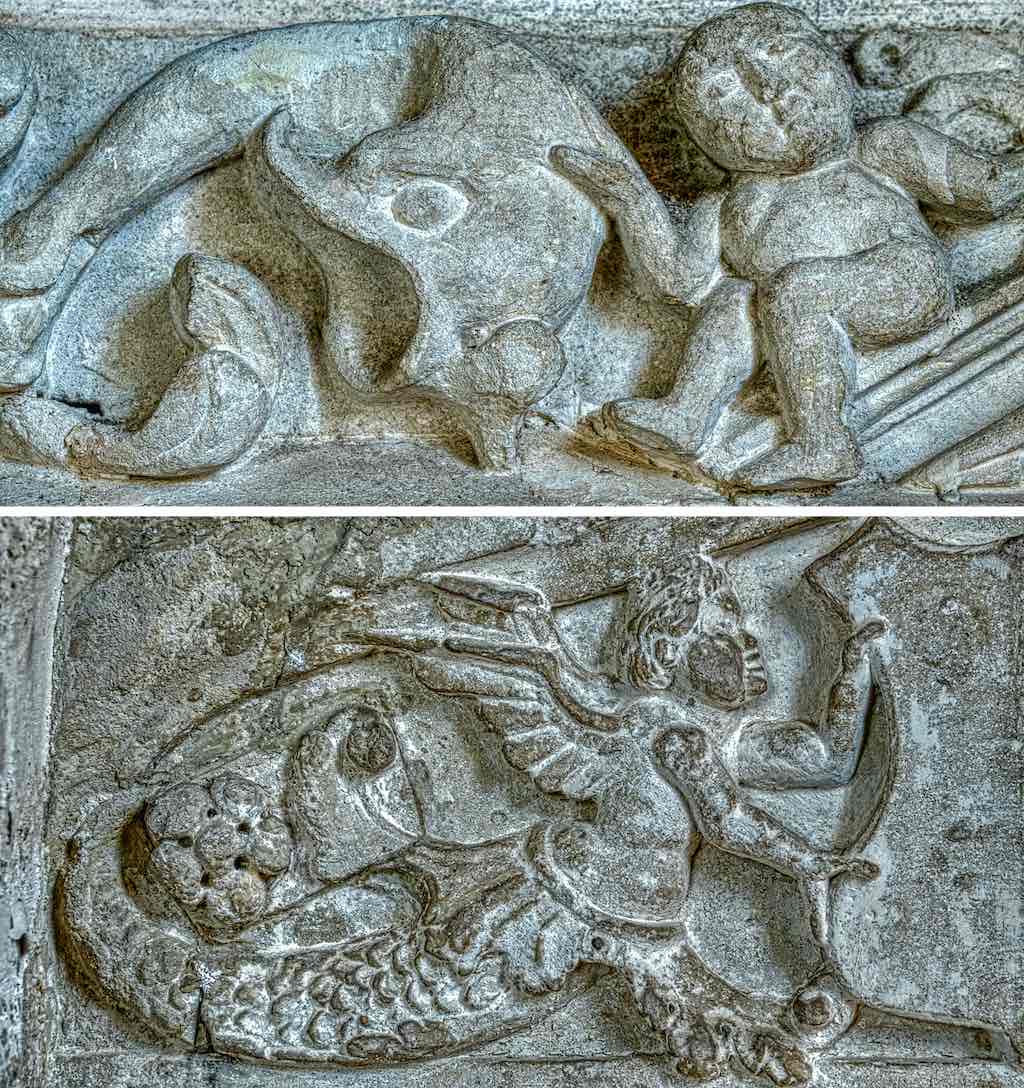 At the head of the Hollow Valley (Holcombe in Devon talk) down a road that peters into a track then plunges to the valley floor, this church and the old manor house sit side by side.

The little village nearby, Longdown, is modern thing, growing up on the new Exeter to Moretonhampstead road laid down in the late eighteenth century. Before, this was just a parish of farms and a hamlet or two, coming together to the manor church at least weekly, more often if any folk could; Mass was a daily thing back in the day.

A pretty piece of work was our Tommy (c.1477-1561), a man on the make and heaven help anyone who got in his way; he burnt Thomas Benet at the stake (such plain words for such horror) in 1531 after he nailed a letter to Exeter Cathedral’s doors saying that the Pope was not the head honcho.

Seven years later he was up there with Henry VIII chanting ‘the Pope ain’t the head honcho’.

Of course, Tommy might have changed his mind after lengthy intellectual pondering, but… Hhhhhm…

He made out like gangbusters after the Reformation, scoring six ex-monastery-owned manors from the Robber King, including Buckland Abbey – only after the King had removed a ton and a half of gold, gems and valuables from it, mind you.

Fake news? Quite possibly. A nice exaggeration like that would likely get more folk on his side.

Tom’s brother-in-law was the last Abbot of Buckfast Abbey, which must have made family shindigs somewhat awkward. Doubt Tom cared though. 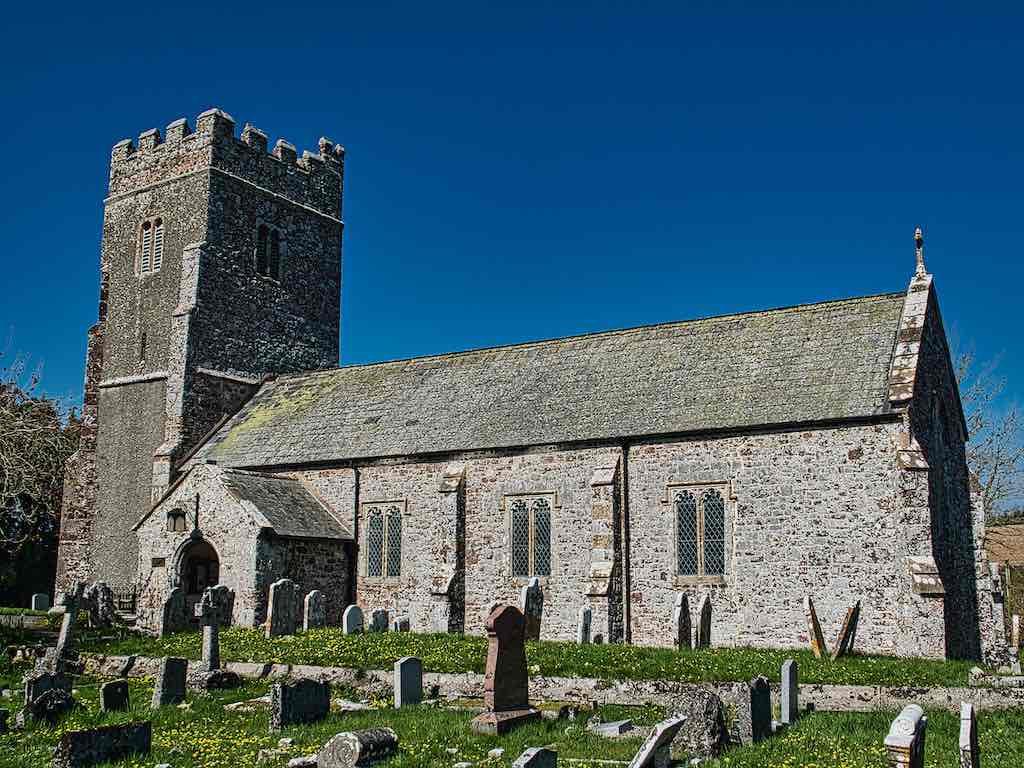 The church is a lovely mixture of red and grey stone in a beautifully peaceful location and a very pretty churchyard. The old Manor House next door is now a farmhouse.

When I first visited drifts of spring blossom adorned the church path, beautiful pinks and whites welcoming me to the old south porch and the marvellous entrance. I felt so blessed.

The red sandstone, the browns of the door and the white wall are mighty attractive, this Devon red is such a warm welcome. Above the 1843 doorway is a twelfth century arch, the only remnant of the Norman church, with three heads carved from limestone, a monk and two nuns seemingly.

What they are doing here is not apparent. It is surely possible that, before the Reformation, the church’s advowson, the right to appoint priest and collect the tithes (a kind of local tax) was owned by a monastery. They could also be a sign that we are entering the sacred.

The Victorian renovation is clean and simple, with those lovely granite arcades carefully preserved. They even kept the box pews until the 1960s when the present ones took their place. It would be easy to criticise their removal, but wood does rot and parishioners do deserve a clean and dust free church as well as comfort.

Mind you, the medieval roofs still hover above the faithful, that is good news.

And then, as we walk up the aisle, there is a treasure worth more than all the valuables from Buckfast Abbey… and more…

An exquisite Annunciation from the old rood screen

The Annunciation, with Gabriel and Mary deciding to be New Best Friends Forever.

The Annunciation, showing the Angel Gabriel telling Mary that God not only loves her so very goodly but also she has been chosen to be the Mother of God. Not so shabby for a young girl from Hicksville.

It is on one of two panels remaining from the early sixteenth century roodscreen and it is the best Annunciation scene ever. Totally ever. Absolutely, stunningly, amazingly brilliant and anybody who does not walk away from this with a grin on their face… please look again.

Their body language is so relaxed, with Gabriel standing casually and Mary leaning eagerly towards her. They really, really like each other, NBFFs straight outta the box.

And the way they carry their clothes, Gabby could be a fashion model in her cut-to-fit dress with that darling collar, barefoot and rocking it, while the Big VM in her red robe draped just so, and her so sweetly tied contrasting belt…

… and then there are the faces…

The Virgin Mary and the Angel Gabriel

The Archangel Gabriel grinning with love

The Virgin Mary beaming back.

Look at them. These two dudettes more than like each other, they are thinking ‘awesome’. They only have eyes for each other too, even though the Holy Spirit (the birdie) is rushing down to pregnify the Big VM. I mean, you would have thought that might have been a biggie, but no, the sisterhood is aflame here and girl power rules. Not your politely mannered, gilded figures in many paintings, nor a god fearing Mary dedicating herself to portentous events, these have their hearts on their sleeves do not mind who knows it.

I syng of a mayden

If I was God looking for a mother and a messenger these two would be a slam dunk. This is my Mary, everyone’s Mary, the Mary next door, the Mary with heart and soul… the mother that God was lucky to have.

Just like this lady here, in ‘I syng of a mayden’ a beautiful early fifteenth song poem about the Annunciation.

Here, in the first verse, there is a clue to that look of delight on both those faces. You see, Mary had a choice, and she chose to bear God; this is theology 101.

So suddenly these grins take on a deeper meaning. Gabby is in awe of this marginal, magical girl who has just agreed to be the mother of God, with the roiling seas of unknowns spreading out in front of her, and Mary just loves an angel. Especially Gabby.

But there is more, far more, to this beauty and I have attempted to show its different facets here:

A finely painted Visitation with The Virgin Mary and St Elizabeth, the future mother of John the Baptist.

There is a Visitation on the other medieval panel, wrongly labelled (the lettering is later and the sun symbol unites the two figures into one scene; plus pregnant), with Mary on the left and St Elizabeth on the right. What a difference this is, far more courtly, far more mannered, painted by a different artist.

Mary has her hair down, as an unmarried lass would, while the much older Elizabeth is all coiffed up as befits the wife of a High Priest, and they both look a tad serious as well being heavily pregnant. Though is that a shadow of a grin on Mary’s face? ‘Good lady, God is here, in me… and you have… ?’

In her situation a bit of trolling would be irresistible, no?

Look up at the chancel which has a very fine adapted Elizabethan chest as an altar, some folks say it is Spanish and they might be right, and a lot of very nice and relatively early Gothic Revival stonework from the 1843 renovation by John Hayward, a nationally known Exeter architect. The carving on the south wall is especially good.

Beautiful lettering over the altar

It also has the original Gothic script, a rare survival, and a delight especially when examined closely, as here…

The detail is astounding

Care must have been taken, deep care.

Medieval stained glass showing the probably donor of the window or the church.

Up in the East Window are some fragments of medieval stained glass, including this quality figure who might have been the donor of a now disappeared full window, or even the donor of the church, kneeling and praying ‘Jesus son of David, have mercy on me’.

It is a common pose for a donor in stained glass, and it was less for bigging himself up than to attract the prayers of the worshippers after his death, a very important part of the faith back then.

The 16th century Easer Sepulchre niche, or maybe the remains of monument to one of the Denys family.

Covered in beautiful Renaissance work, with putti (plump little baby angels) and dolphins, merfolk and other wondrous fantasies, it is a masterpiece. But what is it? Because at its centre is this…

Such astounding artistry in such a small sculpture, probably Flemish, 16th century.

A gloriously dynamic Resurrection, with Christ stepping out of his tomb. Look closely, if you will. The Roman soldiers are in chaos, their bodies all over the place, yet in that chaos is order, they are all raying outwards like sun rays with you-know-who at the centre. So we have two messages here, Christ bringing order from chaos and Christ bringing light from the darkness.

Then there is yer man stepping out from the stone of the church, not accidental this. Again, life from stone, something from nothing.

All this is stating very clearly that Christ is revealing himself as God, who is known for these attributes (check out Genesis for a start).

Then have a glance at the faces and hands of the soldiers. Now, they might be sleeping or they might be in pain, both work for their expressions and postures, and here is another strong message. Christ is bursting through human pain and spiritual dozing. He is here to overcome them, to make a path through them.

Now we do not have to share the faith to appreciate the meanings embodied in this simple piece of stone, but it sure helps our wonder I venture.

Then, of course, there is also the sheer technical accomplishment of the sculpture. It is brilliant.

A putto (a baby angel) holding a dolphin, or a creature attempting beautifully to be one.

As is the Renaissance carving above.

Whether the whole was an Easter Sepulchre (as some folk say) or a monument for a Denys is open to question.

So two kneeling figures, a fashion that only started about 1570, a date that fits this combination Gothic and Renaissance stonework to a T, and no mention of the gorgeous Resurrection sculpture; this could have been added in the 1843 Restoration, a beautiful work brought back from the continent as folk did.

Most excitingly, it is exquisite however it started life as.

Running that Might-Be-An-Easter-Sepulchre a close second in Greatest Carving Stakes is this enticing alabaster statuette from the fourteenth century of St Peter, holding his keys and the church that he founded in Rome.

Sadly badly damaged, likely buried to hide from the worst of the Reformation, it still retains an elegance and dynamism that allures the eyes.

The west tower on a fine day.

This church is so near Exeter, so little known, but has such value that a visit is well recommended, and I haven’t even mentioned the roofbosses, the font… so much.

Including the churchyard falling away from the tower with a bench or two to sit on and life to be still in, this a worth an hour or two of anybody’s time in the sun.

And then wander further down the track that runs past the church (it is a public footpath) and enjoy the views and the beauty as it dips into the trees and plunges down the combe.

Just a perfect slice of Devon…