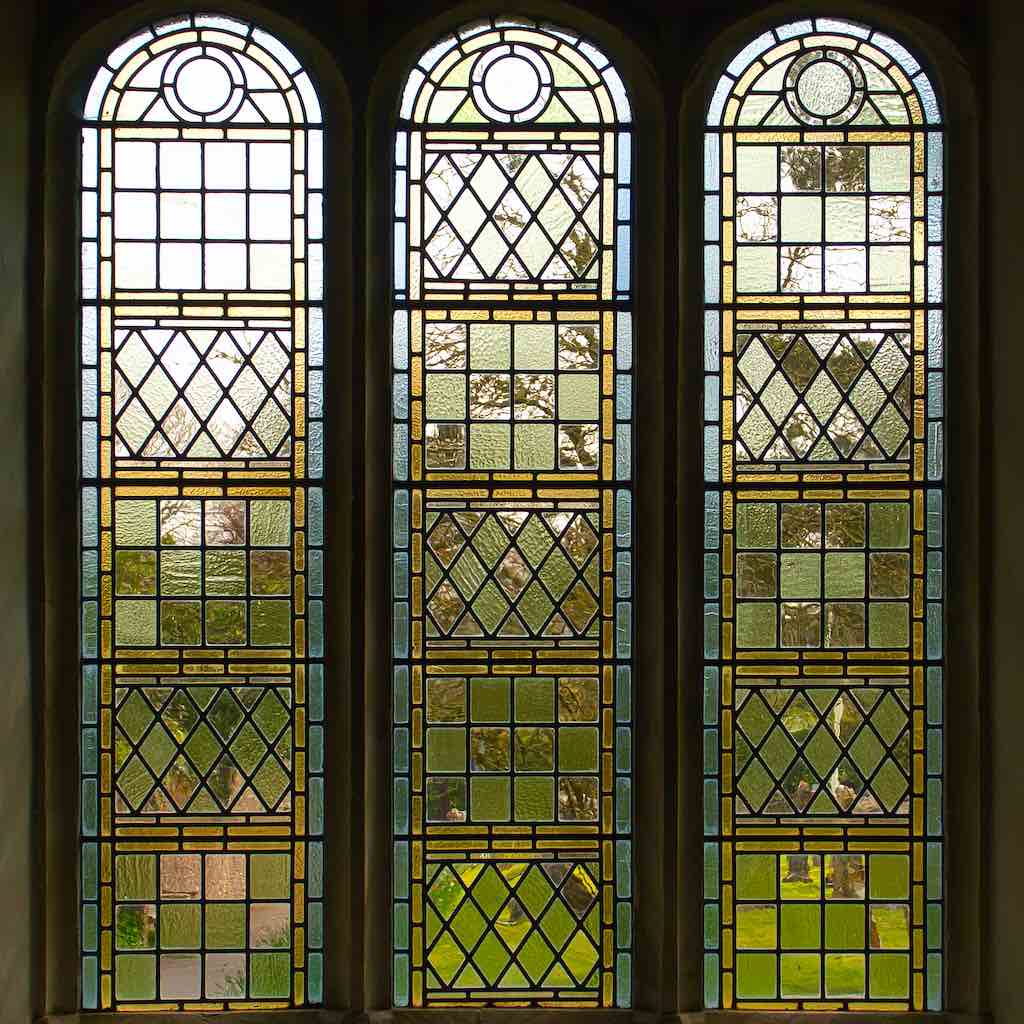 A flat-bottomed vale watered by a wandering stream, an oasis in the jumbled valleys of the Blackdown Hills, the Wood in the Dale, or Dalwood, is such a pretty little find.

It used to be a little island of Dorset inside Devon, probably because of manorial rights stretching back to Saxon times, but it came home in 1844 and, well, nothing much has happened before or since…

Except for one thing. Its early participation in the computer age, in 1806.

Up on Stockland Hill in the parish the Royal Navy built a Shutter Telegraph Station helping connect London to Plymouth, a major Navy port. They managed to get a simple signal between the two cities and back again in three minutes, an unheard of speed.

And the computery bit… ? Communication was by using a near binary system, 6 shutters in wooden frames, open or closed (bit like binary, see), giving 63 possible combinations to spell out a message. Folk at the stations would look at the next station up or down the line with telescopes, read the message, then spelt it out for the next station down the line by pulling ropes to open or close their own shutters and so pass it along.

The new world of technology passing through such a hidden valley, a magical passage I venture. 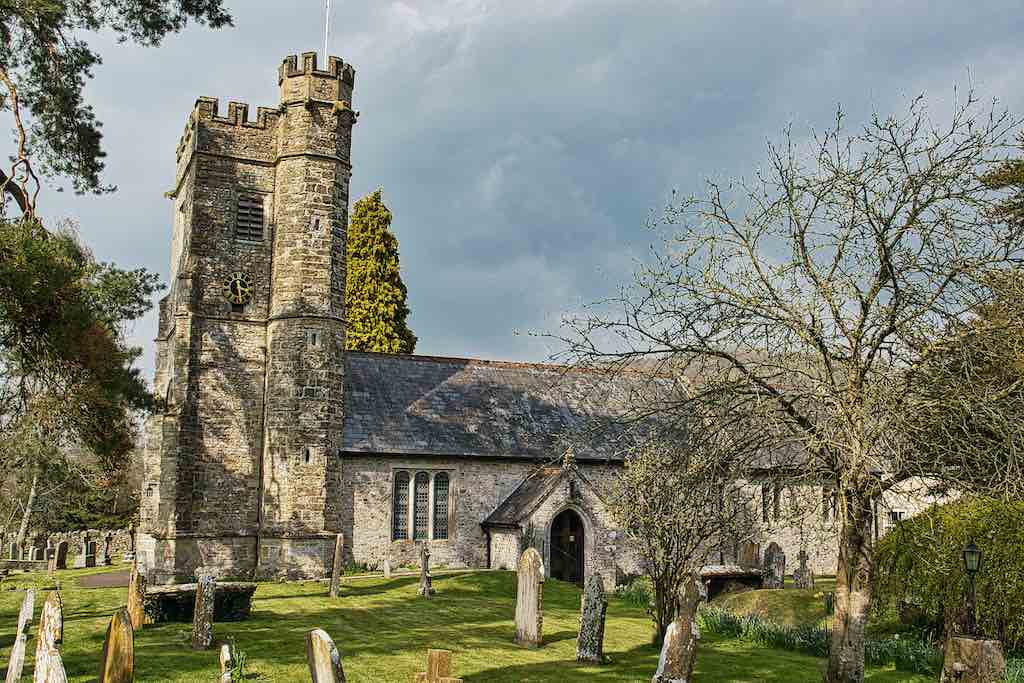 A fine 15th century church hidden away in the Blackdown Hills

The church itself is another simple affair, suiting the village to a T. The first thing that leaps to attention is a flat graveyard. Totally flat. This seems against the natural order of things down here, not only in these rolling hills but in Devon as well. Still, makes for a lovely change.

The tower has those outside tower stairs, just to make sure that we are in Devon, and the stone is a tad more chalky or flinty. The geography is changing as we move East.

Grotesques up the tower. Not gargoyles, which are for draining water off the roof.

High on the early fifteenth century tower are these well-weathered grotesques, probably carved to protect the church from the forces of evil and magic, elemental powers that would do harm, and looking like they have fought a long and hard battle. Respect.

Sometimes I feel these old soldiers should be retired with a parade of honour, fife and drums calling them home, cocooned with comfort and admiration, while some young whippersnappers take their place up top.

A homely church, well-kept and well-loved, a quiet beauty.

Inside the world ‘simple’ springs to mind again, and ‘comfortable’ in a very English church sort of way. Well-used, still the community’s heart, so surely a place for church lovers.

The light streaming through the windows, the pale stone, the dark Victorian ceiling, the carpeted aisle… lovely.

Up above are these so fun roofbosses, bring a grin to my old face they do, nineteenth century, caricatures… there are only a few here, and bet the carver threw them in for free, just as a good friendly touch.

The quotation is a delight too, ‘walk as children of light,’ from the Letter to the Ephesians (attributed to Paul but most scholars reckon he did not write this one himself). It is from this verse:

For ye were sometimes darkness, but now are ye light in the Lord: walk as children of light:
Ephesians 5:8

A strong message. The author is not saying that that all his folk of the faith used to walk in darkness and now walk in light, but that before they came to Christ they were darkness, darkening the world, and now they are light, lighting up the world… So truly be that light, be the child of Divine light that you are.

A finely appropriate message to place on a pulpit, I venture.

Is this St Gregory?

Probably a portrait of Christ

Then in one of the windows are these little snippets of medieval glass, faces wandering in from the fifteenth century. The man on the left could be St Gregory, who was also a pope at the end of the sixth century; he sent off the first mission from Rome to convert the Anglo-Saxons who were making their presence felt in England.

The existing British and Celtic Christianities already in these islands, with roots going back to the third century, were a bit taken aback by Rome deciding that it was the main man; making deals with the pagan Saxons, who really were a bit of a problem for the Brits, before saying hello to the local folk of the faith was a bit of slap in the face, to say the least, and relations never really recovered.

By the time of this glass though Ancient British Christianity was all but forgotten, and Pope Gregory took all the credit for the religion reaching England. Life just is just so unfair sometimes…

The man on the right is interesting. It could well be a head of Christ, because of the halo. Christ was always, or at least nearly always, shown with a halo that had three black lines dividing it, symbolising the three nails used to pin him to the cross. No other person has the right to a halo like this.

So quite likely a head of Christ, but without any context there is no surety.

A soft light in the neat chancel.

The chancel is simple and homely as suits this domestic church, with a well patterned East Window and a goodly atmosphere. As ever, with chancels and sanctuaries, catch the light at the right time and the areas can be breathtaking.

Just as here the sunlight, the shapes, the shadows, the colours, the textures, suddenly finding a mutual rhythm, create a little enchanted landscape to carry away in our heads for a good few days or more.

The limestone font down the nave is a powerful little piece, looks medieval to me but not an easy thing to date without any other indicators. The main guide is more cautious, just saying it is an octagonal font, which is about as useful as a chocolate teapot.

But, as ever, it is the beauty that is the number one concern, and this does have a presence, a very utilitarian at that. This baby is for dunking babies, and nowt else. Works for me.

Foliage on the capitals

Foliage carving on the pillar capitals.

The capitals of the pillars have been well worked too, creating stone foliage modelled on the local nature.

These carvings are so easily overlooked, yet have an honesty and a charm that have been loved through the ages. They were likely painted, possibly with some gold-leaf gilding as well, and all the little valleys and hillocks helped reflect the light from the candles and the windows. Quite a sparkling little scene back in the day.

Colours in paint and glass

Coat of arms of King George III who was ruler during the American War of Independence.

There is a very naive George III coat of arms here, very charming in a domestic way, once again. That lion is wonderful, and the unicorn looks to be straight out of the pages of a children’s book.

Take a moment to enjoy the wonder in what has now, to some extent, become the mundane. Colours are all around us in these days, but then they finished renovating this church in the nineteenth century and revealed this delightful mixture of greens and yellows, how many of the good folk of Dalwood parish looked with joy at all the little touches like this glass?

A fair few, I venture, if not near all, and now it is our turn, with the colours and the textures and the shapes. A grand little joy to bring a grin to into our brains.

A lovable tower too, with its local almost flint stone and the very Devon outside staircase.

The thing is with this little sweet is that it is just that, sweet; it will not set the world on fire but it will be touching the hearts of the locals long after I am gone, and deservedly so.

That is a win for Dalwood, in my books.