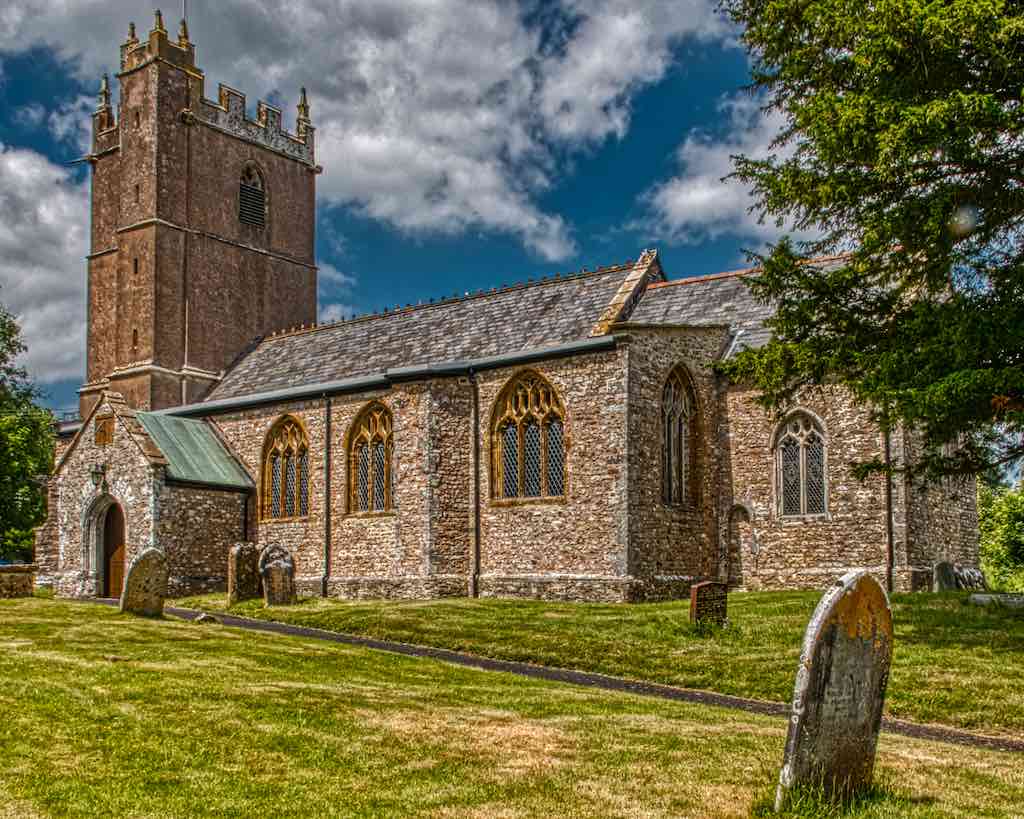 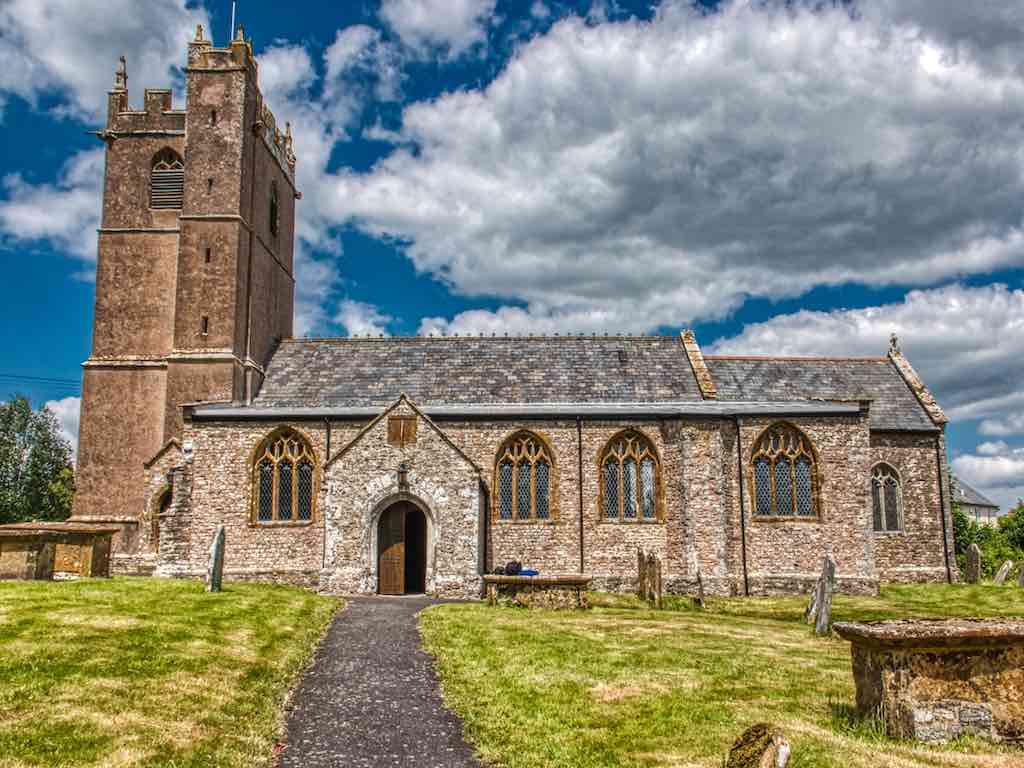 The west tower and south aisle are 15th century

The Blackdown Hills are a charm, barricading Devon off from Dorset and a smidgeon of Somerset as they do, quirky and unknown, full of tiny spiralling lanes disporting through lush valley bottoms and then bouncing up to meet flat-as-a-pancake, rectangular-fielded plateaus; these same plateaus converted from open land into farmland only in the last few centuries, with roads so straight they could be in Norfolk.

Here, on the northern edge of the hills, sits another rectangle, Clayhidon Parish, a very modest little parish tucked away in a part of Devon that folk never wander into without a good reason, and more is their loss for that.

The farms are still laid out as they have been for millennia, taking in a bit of the plateau tops, the steep slopes for sheep and cattle and the productive valley bottoms for crops.

Why? Well, the highest had clayey soil and the slopes had greensand stone, lots of potassium, and they both could be dug, mixed with manure, and spread on the valley bottoms for fertiliser, a process called marling, a technique not confined to the West Country but used most often here. In days before much long distance trade all food needed to be grown on the farm, and every opportunity taken to increase yields.

A fine 15th century window too

Even Oliver Cromwell, that famous Cambridgeshire farmer (though a bit more famous for other less salubrious shenanigans) said:

Which is all a roundabout way of saying that Clayhidon is an enchanting parish with a little jewel of a church sitting up in the north.

Like this sixteenth century window sitting prettily on the north side, or the fact that the nave and chancel are probably late thirteenth century, with the south aisle and tower being fifteenth.

Or that this is one of the oh-so-many Devon parishes that have a very small, scattered central village, and where we can begin to understand just how important the church was in the past, both for faith and community, for all the outlying settlements.

1840s furnishing in a 13th century nave and chancel

Whilst inside it is equally enchanting in a deep rural way, nothing to see here but country magic, and a fair bit of that too…

That probable late thirteenth chancel arch for one thing, seemingly off centre but likely that’s the fault of the aisle builders, doing their thing two hundred years or so later. Pedantic me does so want to shift the pews over one way and the pillars another so that arch is in the centre, but then again if the parish folk have been happy with it for six hundred years I might consider gentle agreement.

Before the Reformation, in the Late Medieval, there would have been a rood screen (or rood loft as it was called) with a carved rood hanging from the roof, or standing in the loft. The tympanum, that space above the arch, would likely have been painted with a background, possibly showing the Day of Judgement (a Doom painting) or something equally relevant.

But still, it is a very nice arch and thought has gone into its design. Double-chamfered it is called, meaning those two angled faces that start from where the arch springs, where it leaves the vertical. It is a cheeky little arrangement, giving added depth to the arch and a deepness to the framing of the chancel and that sacred altar, where the deeply meaningful Eucharist took place.

When it was built in there was a probably some kind of screen or even curtain dividing the holy from the secular nave, before rood lofts were invented. What exactly what this division was, or were, for there might have been a series as things changed, we are not sure. A plain wooden screen? A heavy curtain? Just some rails? A stone screen?

The rood loft, bounced onto the scene because of theology (as all the best things do, of course!), where the importance of Christ’s Incarnation, his human flesh and blood, climbed the league table and thus yer man’s actual suffering in a human body. So the rood, the crucifixion scene, became more and more important, carefully carved and placed up there above the chancel arch, and a loft to look after it.

But as ever, theology in a paragraph on the internet is bound to be fuzzy and a very vague sketch, especially from a recent heathen like me, so this is very broad brush. Very.

Looking up in the chancel, now there is something I do know lots about, lots and lots, and that is Devon roof bosses. There are some wowsers here. Simple stuff, you say? So very not so, I say…

Ignoring the colouring for a moment, which is more recent, and not historically accurate but a good pointer to the fact that these were coloured and very noticeably back in the day, and take a gander at the actual carving from the 1400s.

Churches were darkish then, the windows were probably roughly glazed and with a medium to a lot of stained glass, there would have been incense burning all day, the walls painted with figures and patterns, beams of sunlight in the day jingling around, night would have been candlelight only.

So these were carved to catch all the light, and painted (maybe with some gilding here in the chancel) with shades and colours to enhance the already varying depths of the carving. Looking up, folk would have seen these magical leaves glittering and dancing, the wonder of God’s creation here to marvel at.

And still doing a bang up in the twenty-first century. Not too shabby that.

While back in the nave this sweetie is something very special, a pulpit from around 1520, with the barber pole decoration on the uprights helping date it accurately.

It might well have been supported by a ‘wine glass’ stem in the past, or even straight boarding, the present stone support is far more recent. (thank you Marham Church Antiques and Shaw Edwards Antiques for this information)

Take a moment or ten to deeply enjoy this carving

Most importantly, it is so lovely. The sinuous vines with those delicate leaves growing from them, the oh so regular barber pole decoration on the dividing uprights, it really is special, Even more special back in the early 1500s too.

Imagine, if you will, the priest rocking up on his brand new pulpit to meditate in English (because sermons were in English) on the basics of the faith, the Apostles’ Creed, the Ten Commandments, that love God and love your neighbour thing, and a few other core components, as the congregation clustered around, moving their stools or folding chairs to cluster around the pulpit, sitting on the floor or just standing at the back.

To have this kind of thing preached from such a thing of beauty, in a world where beauty for the average folk was in short supply, must have been a powerful experience.

Then there was the bede roll, a list of the dead from many a generation past, bede meaning prayer, and so asking for prayers for the departed, read out at regular intervals from the pulpit. In a world without grave stones or solid memorials except for the elite, hearing and praying along with everybody else for great uncle Elias would have really cemented village life; the dead were part of the community in a very deep way.

The most common pious bequest in wills was the provision of lights at altars and religious images and inclusion in the parish bede-roll, both of which required just a few pence.
Commemoration of the Dead in the Late Medieval English Parish, Sally Badham

But back to the carving…

The closer we look, the better it is

Because in deeper detail its mastery shines more and more brilliantly, where the stippling of the background brings greater depth to the whole composition and helps the foliage doubly stand out.

Then the twisting of the central vine… oh my sweet heart, it is gorgeous.

Gold and browns predominate in the chancel

The chancel is a wonderful contemplation in golds and browns, with those two Ten Commandments boards on either side just in case we get too touch feely! Nothing like a word of advice from the Divine to keep us on the straight and narrow.

Stained glass in the East Window

Lovely quarry glass (those diamond-shaped panes) in the East Window too, golden foliage and symbols everywhere.

Looking back down the nave the west gallery shows its virtues, and it is really rather good… In fact the whole interior furniture hangs well together, indeed the…

And the deceptive simplicity of this west gallery helps prove the point.

A very elegant classical frontal matching the 1840s taste (and what good taste they had), is served equally well by the choice of those thin cast iron supports, barely visible, giving the gallery a fine lightness and a feeling of floating above the pews.

Cast iron was really coming into its own about this time, older galleries were supported by hulking hunks of timber, often well carved (and I will be the first to admit that hulking hunks have their own charm).

Whoever renovated this interior made a fine design choice, down here it might well have been seen as relatively modern, and all the better for that.

Though like a dear old friend, the medieval is still here to greet and delight us. Like this bit of repurposed carving, now slotted in as a bench end, but just as likely to be a surviving piece of the old rood screen.

Just look at the flow

So from the same period as the pulpit and doubtless by the same carver, especially with that central ‘barber pole’ central column being exactly the same.

And once again, as with the pulpit, it is the sheer virtuosity of the foliage carving, the organic sinuosity, the dynamic flow, that really hits the spot. Right bonny to be sure.

From further back, probably late thirteenth century like the chancel arch mentioned before, is this well-proportioned pale honey Ham Stone font. Ham stone itself is from Ham Hill in Somerset only about twenty-three miles from Clayhidon, and is rightly famous as one of the most beautiful building stones in England.

Here those stubby bits on the base, they are likely where shafts sprung up to join the bowl, but that is speculation. They definitely served a purpose though.

The most excellent 1840s interior

Though it is the 1840s that dominates, with these original pew hinges and the browns and golds polished by hands over the ages, opening, closing, the aged clasping for support, the kids playing hide and seek…

It is mild church this, the kind of mildness that creeps up on one, and suddenly we realise what fun we are having, with it’s fine rustic mild interior and spots of medieval beauty.

Mildly fun so hits the spot deep in the wondrous Devon landscapes.