Cadbury Church of St Michael and All Angels Description 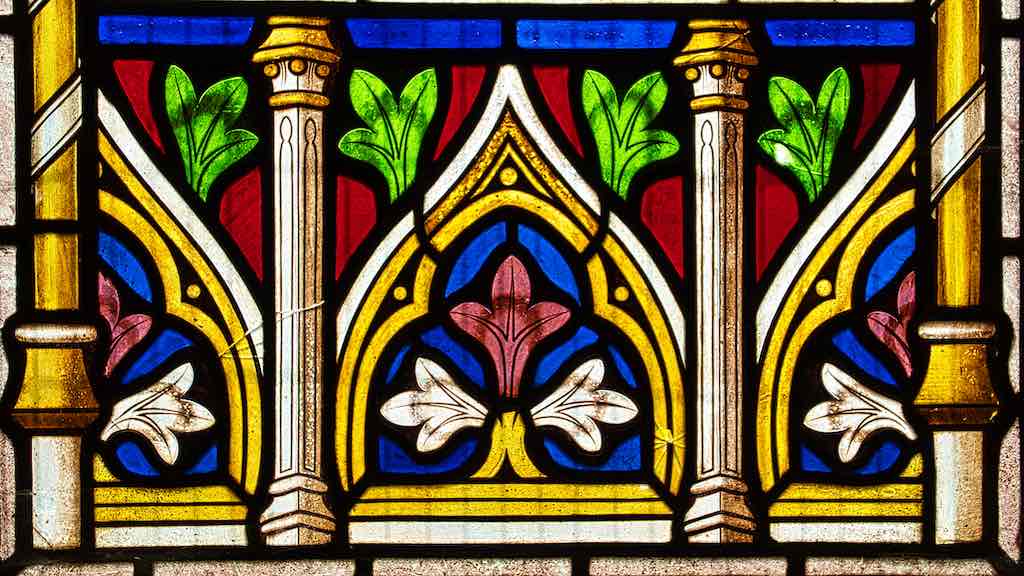 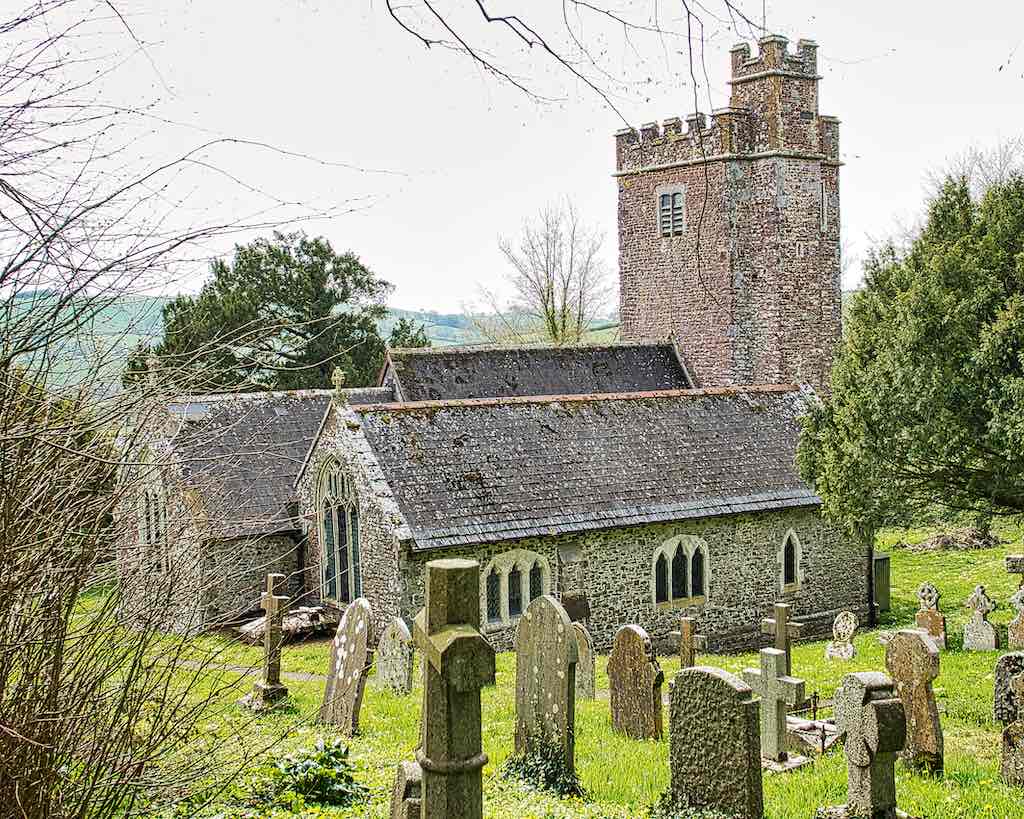 Here in Devon, landscape and churches are like love and wonder; they are both extraordinary by themselves, but together they make an enchantment shivering through eternity.

In Cadbury we are reminded yet again of this truth, in this pretty little churchyard perched on the beautiful slopes reaching up to Cadbury Hill Fort, gazing over gorgeous countryside. There is a reason why millions of folk visit Devon every year, and here is one, a very fine one as well.

There is, they say, a dragon dozing under the hill fort, probably gorged senseless on cream teas and cake, guarding treasure, but dragons are not known for their intelligence and the treasure is outside the hill, here, for all of us.

And the scenery between Cadbury and the River Exe is particularly pretty, even for this slice of heaven on Earth, and the church fits into it just so.

Cadbury Church of St Michael and All Angels

The tower itself might be around thirteenth century, which is an early one for hereabouts, and the nave and chancel the same, so we are looking here, in this image, at an eight hundred year old structure, replacing an earlier church, and now as much the landscape Devon as the fields and trees that roll away downalong.

In Devon, the churches are the landscape.

And we know there was an earlier church because William and Aldreda Fitzralph gave it to the Priory of St Nicholas in Exeter, and by ‘give’ we mean the right to collect the tithes and to appoint the priest. Also the font is Norman, twelfth century, from an earlier church.

The interior of Cadbury Church

The north aisle was added in the early 16th century

Inside is mighty pleasant again, well tidied up in the nineteenth century. Those pillars are from the sixteenth when the north aisle was added.

A Victorian Transfiguration window by Clayton and Bell

In that aisle is this lovely Victorian stained glass window of the Transfiguration, when Christ took Peter, James and John up into the mountains and appeared to them in his glory, with Moses and Elijah on each side.

Now far be it from me to even attempt the meaning of this, but generally it is agreed that it was the first time Christ showed his Divinity along with his human nature; it was, in a way, at one level the revelation of Christ acting as a bridge between Heaven and Earth.

Admittedly this is my little-learnt understanding, and I only mention it because there is more. At the end of Jesus’s life he does the ‘this is my blood’ stuff at the Last Supper, and this is the core of Mass, Christ’s presence in the wine and bread of the Eucharist, either truly so or symbolically depending on which side of the bed you sleep on.

And looking at the layout of the scene above, Moses and Elijah make like the sides of a chalice, with a little stem below, and Christ in it, just like when celebrating Mass. Is not that a nice symbolic composition?

Angels in the background

Pretty angels all around

Looking closer, there are angels in that there cup, as one would expect from something so Divine taking place, and well-sketched out angels too.

While this, one of the disciples, moving away from theology, well, it is just a wonderful colour scheme with that yellow and red dancing off each other; a dandy in the wonder world indeed.

The chancel renovated in the 19th century

Moving onto the chancel, the altar back is pure nineteenth century, the altar itself is possibly seventeenth or earlier. It is all quite a big thing for such a small rural church and all the more welcome for that.

And there is another angel here too, in a sixteenth century bench end, bit battered, a life well lived, but a fine survivor.

It has been covered with a brown goo that folk though would help conserve medieval woodwork back in the day, but then again it does look as if it might have been on its last legs at some point.

It is a cheeky little sketch too, probably Renaissance inspired, so later in the 1500s rather than earlier. It also looks like someone has doodles with a knife on its face at some point, but I do like its top knot and this cheeky wings. Also that leaf napkin, seemingly time for dinner.

The lectern made from a 16th century bed

Well, it might have come from Ottery St Mary, but it likely is not seventeenth century and most definitely did not start life as a lectern. Here is Paul Fitzsimmons, a national expert on Late Medieval church carving:

Something we see a lot in churches, this is a 16th century four poster bed made into a lectern, possibly done in the 18th or 19th century, all the parts are indeed from Devon circa 1580 – 1600

Which is rather very wonderful in its own way; sermons and readings have likely enough put plenty of folk to sleep in church in their day, so bringing a bed onto centre stage works for me, bigly grinly so.

A beautifully carved bush or tree

It is also rather good as well; with a some confident strokes of the chisel the carver has created a willow tree here… or is it a bush? Whatever it is, it so well illustrates the foliage of a tree or plant, that messiness along with a natural pattern, and I love it so.

Christ of the Seven Sacraments

Christ of the Seven Sacraments in medieval glass

Of course, if you still (still!) need a reason to visit Cadbury church this medieval stained glass gives it, in spades. It is still an intensely powerful piece even if it is missing major portions of its surrounding glass.

For it shows Christ and the five wounds that he suffered on the cross, four (feet and hands) from the nails and one (heart) from the spear that was thrust into him to check he was dead. From these wounds flow eight streams of blood which would have connected to depictions of the Seven Sacraments of the Roman faith: Baptism, Confirmation, Eucharist, Marriage, Ordination, Penance and Extreme Unction.

The Sacraments were intensely affective, seen as channels of the Divine Grace to God’s people, flowing from the wounds of Christ. They were

… the medicine of the soul… established by God for the remission of sins and transmission of grace… the visible form of an invisible grace; a Sacrament is also the sign of a sacred thing.
Quinque Verba (fourteenth century), from Pastors and the Care of Souls in Medieval England, Shinners and Dohar

And here is the suffering Christ, humiliated and abused, a human Christ, a Christ that loved his tormentors, and from whose actions the Sacraments came.

Wearing the Crown of Thorns, staring death and pain in the face, his face here is so expressive, shifting between pain and compassion, with that little drop of probable blood from his nose reminding us this is a man undergoing nightmarish torture.

It is wonderful art.

And it is not alone in Devon. There is a very famous medieval Seven Sacraments window in Devon in a little village, Doddiscombsleigh, by the same artist, which has all the seven sacraments present but is missing the central figure of Christ. So to see how the surrounding might have looked, take a rumble to Doddiscombsleigh.

Whist as a change of pace this nineteenth century window fits the bill exactly, very different from the previous version, blocks of colour and very stylised, which is the point.

It is illustrating this text, unlike the medieval Christ that is very much not-textual based. This one is styled for far less initial emotional impact, and there is a goodly reason for that.

It is for looking at and meditating on, to think about rather than be overcome by feelings, at least to begin with. What does the window mean by reference to the text?

Well, one interpretation is that it was in its day a bit of an in your face challenge to the viewer, though we tend miss its power in the modern world.

Back in an era when children were put to work before their teens, when factories plucked orphan kids from the streets and workhouses to work them to the bone and discard them as they broke or died, when farm work started at seven years old, this church window is saying something very different.

Children are not here for us to use, to exploit, to beat and abuse and discard. Christ has their backs, and if we do not then we are not Christians.

We are all God’s children, especially including children.

Or something along those lines.

The church itself (Anglicans and Non Conformists together) was in the forefront of changing attitudes to children. I have lost count of the number of parishes that set up free schools in the nineteenth century, nearly all funded or partly so by the rector, most of whom cajoled and sweet-talked families to allow their kids to come and learn.

In the end the state stepped in to make a formal system of free education, but it started in the parish, with the vicars (and ministers) to a massive extent, and this window is part of it.

The Norman font here was itself rescued from a hard and lonely life in a ditch beside the churchyard in the nineteenth century, and now has pride of place in the nave, representing also the Sacrament of Baptism, one of the two most important ones (the other one is Penance).

It is carved from vesicular lava, vesicular meaning bubbly, a stone that is common around this area. Exeter itself, only a few miles away, is built on an extinct volcano.

It is a very attractive stone, the faint pink tinge and the frothy texture. It also seems to copy the shape of other fonts of that period in Devon that are made from more expensive Dundry stone, imported more expensively from the wilds of Somerset (thank you, Tim Palmer).

The Lion and the Ox, Mark and Luke’s symbols

Though a bit of wildness never hurt anyone, especially these darlings doing their very wild dancing, prancing away for a good century and a half or so.

They are such fine, dynamic representations of the Mark and Luke’s symbols, the winged lion and ox.

Another window, another Christ…

Or this, which is a pretty little Neo-Medieval Christ, those blocky colours again, it could almost come straight out of an illuminated manuscript. Christ the King, set over the main altar as well, just rightly placed.

There are a lot of Christs in this church, and it is fascinating to meet them all, such discerning illustrations of various facets of the Divine, each one full of meaning.
So wonderful too.

Churches for many of us most always exceed our expectations, we can rock up to a little rural pretty like, say, this one in Cadbury and not expect a huge deal inside…

… And wrong is such a pleasurable byway down here in the green hills of Devon Church Land.