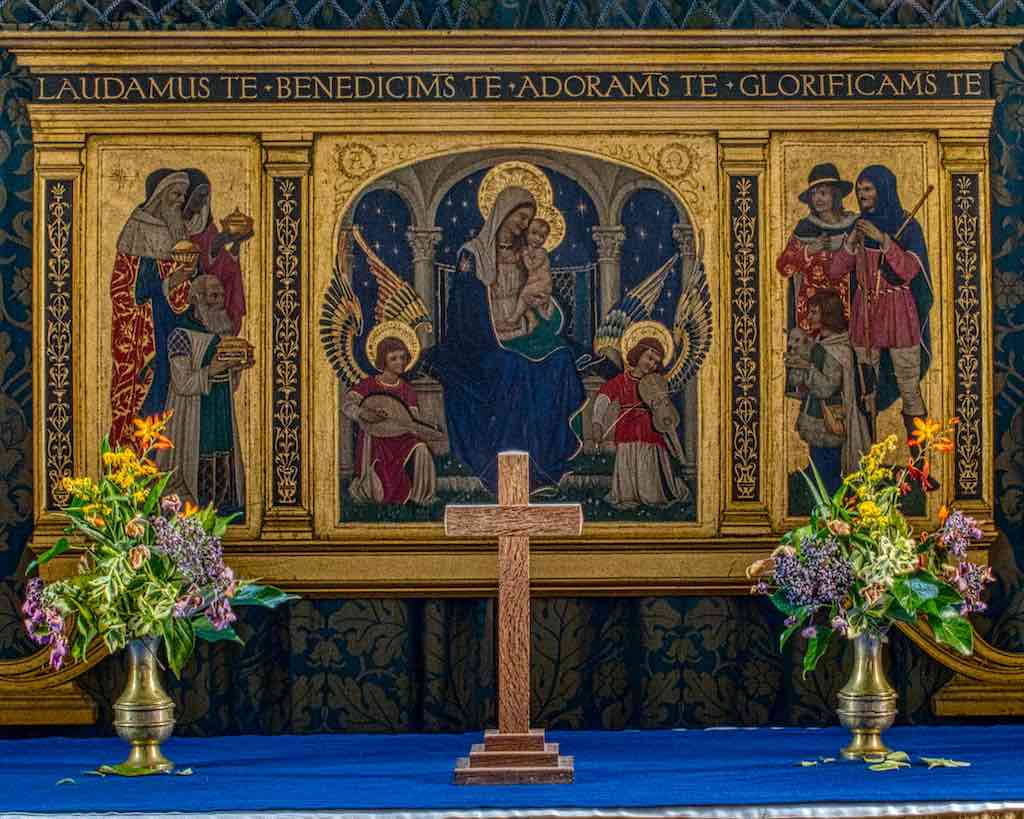 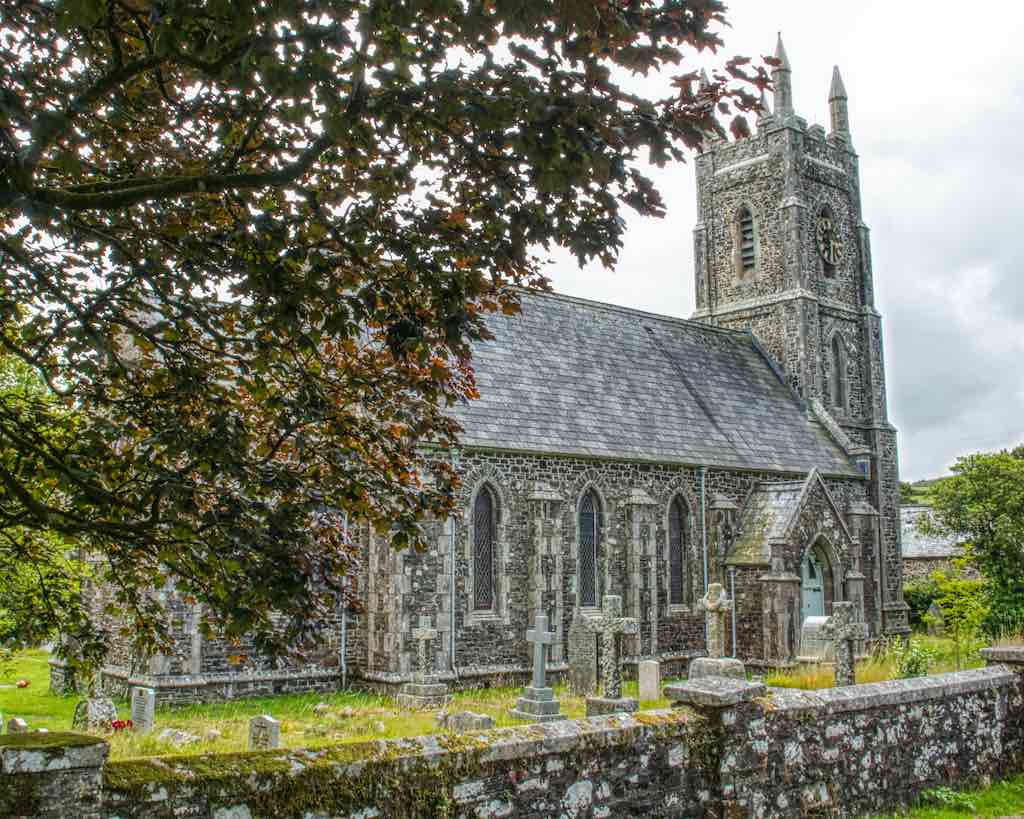 t is all a bit of an oddity is Brentor Christ Church, at least for this lush corner of Devon. Admittedly the local stream that wanders into the Tavy is called the River Burn, which means ‘river stream’ more or less, but this is odder.

Most obviously, it is so not a country church, it could come from the streets of Plymouth or Torquay, and less obviously it is what folk called ‘unarcheological’ which mean that while it uses styles from the medieval period it mixes them up as a good DJ might; a practice that was so not approved of by the Diocese of Exeter at the time.

It was all designed by George Wightwick, a well known Plymouth architect who did a lot of still-existing work around that city, was arguably the first architectural journalist, but also tad frozen out of the church world apparently, because

And maybe, just maybe, this church shows why, with its mild mix of styles.

So here, for example, those lancet windows in the tower are somewhat (and only somewhat) Early English, as they say, around fourteenth century style, whilst the slim tower itself, especially with those pinnacles, is more fifteenth or sixteenth Perpendicular style.

Another oddity is that technically this is not a church, it is a chapel of ease. The true parish church is St Michael de Rupe, a very famous twelfth century church on a volcanic hill visible from miles around… including by every passing rain cloud seemingly, a long walk followed by a steep climb up a muddy track.

It is not the first chapel of ease, there was a small one built earlier in the nineteenth century, but no traces survive. For sure it would have not been nearly this size nor this comfortable.

This one has a very fine front door painted a gorgeous colour to show off the surrounding stones at their best.

Those buttress pillars well frame the arched doorway while that stone edging to the gable roof brings all to a fine full stop, very well done, and then the actual door with the little windows at the top, a modest charmer.

The nave and chancel

Inside its a very cosy space, full of twilight as our rural Victorian churches so often are in Devon, with bare stone walls and rich autumn browns from the oak-work installed in the 1930s.

The walls were originally plastered, but this was removed about the same time the new woodwork was installed.

So what we are seeing is a variation on the original church, and it is rather good.

The stone walls, well pointed and very even, bring a fair amount to the party, and the wood work is beautifully crafted in the style of its day, not rhyming off Gothic style as is so often the case; not that I have anything against rhyming with Gothic, as my writing shows, but here not doing so is a grand thing. Here it is simple 1930s work, always a pleasure.

Why the church was built

Looking down the nave with its marvellous Victorian roof

So why was this relatively large church built to replace an existing chapel of ease?

Well, a few reasons likely enough. Before the Reformation this was a small, poor parish, and probably very proud of its very special parish church, then as the village grew the seventeenth century saw a church in turmoil before settling down in the eighteenth century to not much, to be fair. Nothing was really done to churches, and completely new rural ones were hardly ever built.

Come the Victorian age and the railways, a fair amount of well-off folk with a hankering for beauty retired down to Devon and at the same time a new breed of clergy who wanted to pour new life into what they saw (with some reason) as a rather moribund Christianity (that went for the whole of the country, not just here) took over parishes. These two factors lead to a lot of donations into Devon churches for renovation and, less often, building.

So in 1844 Isabella Howler left a large sum for the building of a church here, and in 1856 or so two other folk donated bigly too, a Mrs Danby who I have not been able to trace at all and Admiral Octavius Vernon, the eighth son of the Archbishop of York. Lovely names too, straight out of a nineteenth century novel of social affairs.

Plus of course the parish folk, who delightedly over the next century or so proceeded to fill this enchantment with their own taste, angels especially.

Angels from the old altar back

Pretty angels probably from the previous Victorian altar back

Like here, on the wall of the nave, a trio of darlings rocking out to Dartmoor ditties and such genteel rocking too.

Victorian, and probably the original Victorian altar back (reredos). Standing on clouds too, as many an angel does.

The new reredos, oh my, we are so coming to that!

As ever in this church, the delights are enshrouded in the shadow of Victorian stained glass, with subdued colours glowing softly and the glittering of gold to tempt us into the mystery of the sanctuary.

The enchanting altar back by Christopher Webb

A Madonna and Child by Christopher Webb, 20th century, and a beautiful piece.

Because here is wondrous thing, maybe not hitting the spot for folk of pure modern sensibilities but then again, us church heads have sensibilities ranging from modern to Ancient British and all stations in between. I win for us I venture.

This reredos is beautiful depiction of the Nativity from the 1930s, with the Wise Men (the Magi, probably from Persia) bringing their gifts on the left and the Shepherds coming to adore the new Messiah on the right (see below). And angels, cracking angels too.

It is a beautiful work by a major artist, Christopher Webb, a pupil of Ninian Comper, who mainly created stained glass but also had a good sideline in these kind of altar backs; this seems one of his best.

He has even got the musical instruments right for about the fifteenth century, which is amazing in itself.

I love the Renaissance style here, with their sumptuous clothing, detailed faces and such delicacy in the bodies.

And then the fact of the Wise Men and the Shepherds being on either side of the Nativity, opposites in many ways, the deep poor and the very wealthy, the marginal and the mainstream, the rough and the sophisticated, brought together in equality by the birth of Christ. Plus that lamb brought as a gift seemingly, worth all the gold, frankincense and myrrh in the world.

Romanticised? Somewhat, or more than somewhat, this is true, but then again Christ did not choose to call himself a Wise Man, he called himself a shepherd.

No prizes for guessing whose side he was on.

An angel praying above the altar

Above the altar is another angel, a beautiful modesty, not unusual but each time we see similar it is the different interpretations that can really attract the eyes.

Meanwhile the stained glass beckons to us in a similar modestly beautiful, delicate flowerettes with a sidebar of oaken charm, a true feast for the eyes.

Or these swirling and angular organic abstractions, blueprints for alien brains, something that Victorian stained glass artists did so very well and showing it here.

The font is worth a good look too, from the 1856 build apparently and cleverly resisting the Victorian temptation to carve fonts an inch of their lives. Not that I object to that tendency, but here a simply carved granite font fits the bill to a T.

Redolent with meaning too, those clustered shafts supporting a bowl with stylised church windows, symbolising not only the building but also the Christian Church which is welcoming the newly baptised.

And on top the 1930s font cover, more angels, more church symbolism shaped as it is like a church spire supported by flying buttresses (not to be seen in the real world) with the Holy Spirit on top; from the humble granite we can reach the Kingdom of Heaven.

With foliage below, because Devon carvings so demand foliage, and little quatrefoil openings to show us how we can glimpse the mystery of the same.

A mild little country piece in a style of its time, exactly why I love it.

A charming painting by Ernest Heasman

Whilst this little treasure is again in the style of its time, around the 1920s, in the children’s corner of the church.

It rhymes so well with the altar back as well, where the Magi and the Shepherds are bringing their gifts while here the children are bearing their gifts to the infant Jesus, and boy what gifts!

Flowers, a doll, a model yacht, a puppy, these so seem to be the most valued items for each child, and here they are gifting them to Christ, who I am sure blessed them rather than adding them to his own personal toy box.

It is apparently by Ernest Heasman, who was another well-known stained glass artist and illustrator, and it is perfectly charming. Just so sweet.

Just as this somewhat whimsical little church is, with its neat stone walls and wandering angels, lovely exterior and calm interior, and the dashes of enchantments in the paintings, glass and woodwork.

Its more famous mother church up the road is well worthwhile visiting of course, but spare a bit of time for this sweet young thing too and you will be well happy.

It is a modest loveliness.