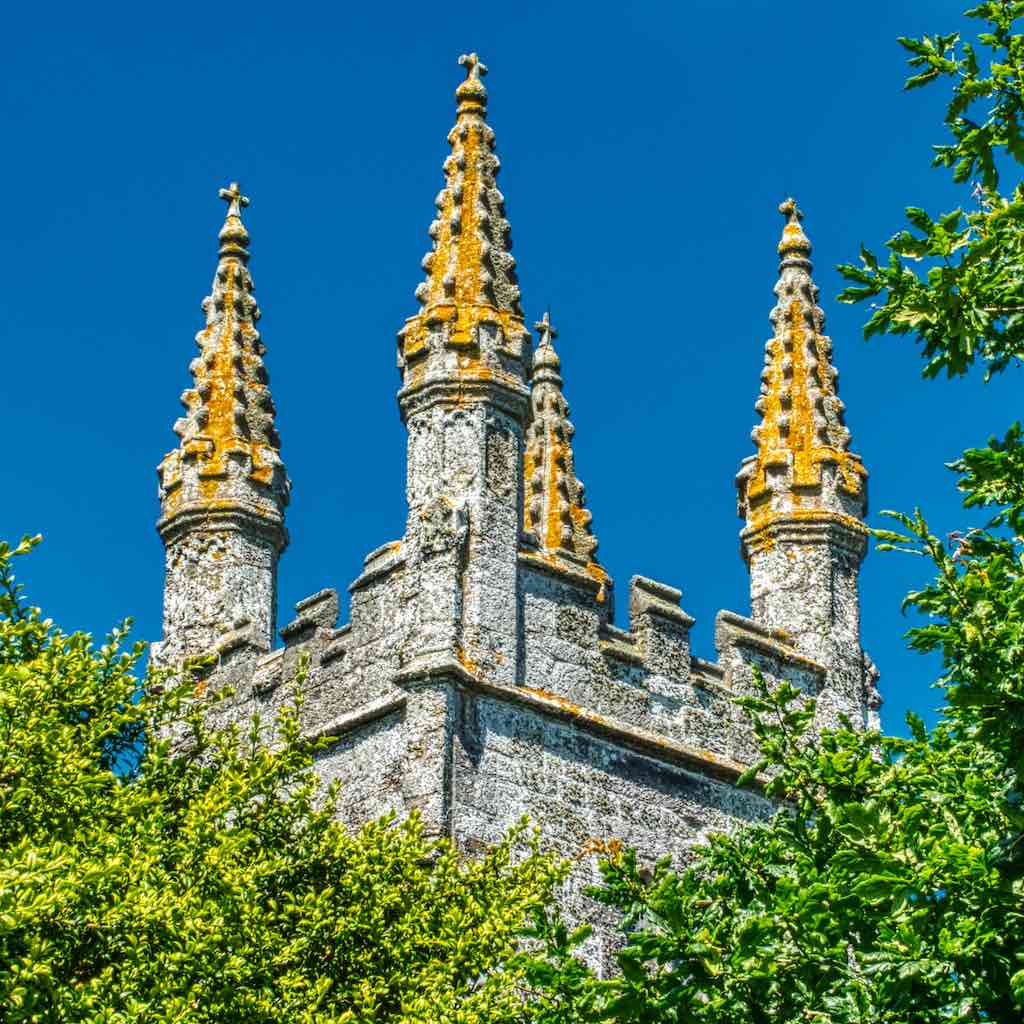 Bradstone and the River Tamar

Walk down the wooded combe from this ancient hamlet through sun-flecked greenery and bird-melodied breeze, past old Coombemills and Pallastreet Farm, to where Old Man Tamar narrows between two steep bluffs, and greet the first bridgeable site below the meeting of the Lyd and the Tamar and the wide flood plain they splash around in.

Here is Greystone Bridge wading elegantly; eight arched, tall, solid, strong, standing up to winter spates since 1439, on a mighty important route; it connects the ancient Saxon market towns of Launceston and Tavistock.

Tavistock Abbey was one of the most important in the South West, and they organised the building; it was the kind of thing that abbeys did well, improving life for people.

Whether there was a bridge here before or not we cannot surely say, at least a ferry or a ford, possibly a wooden construction; the size of this new stone one definitely demonstrates the crossing’s importance from way, way back 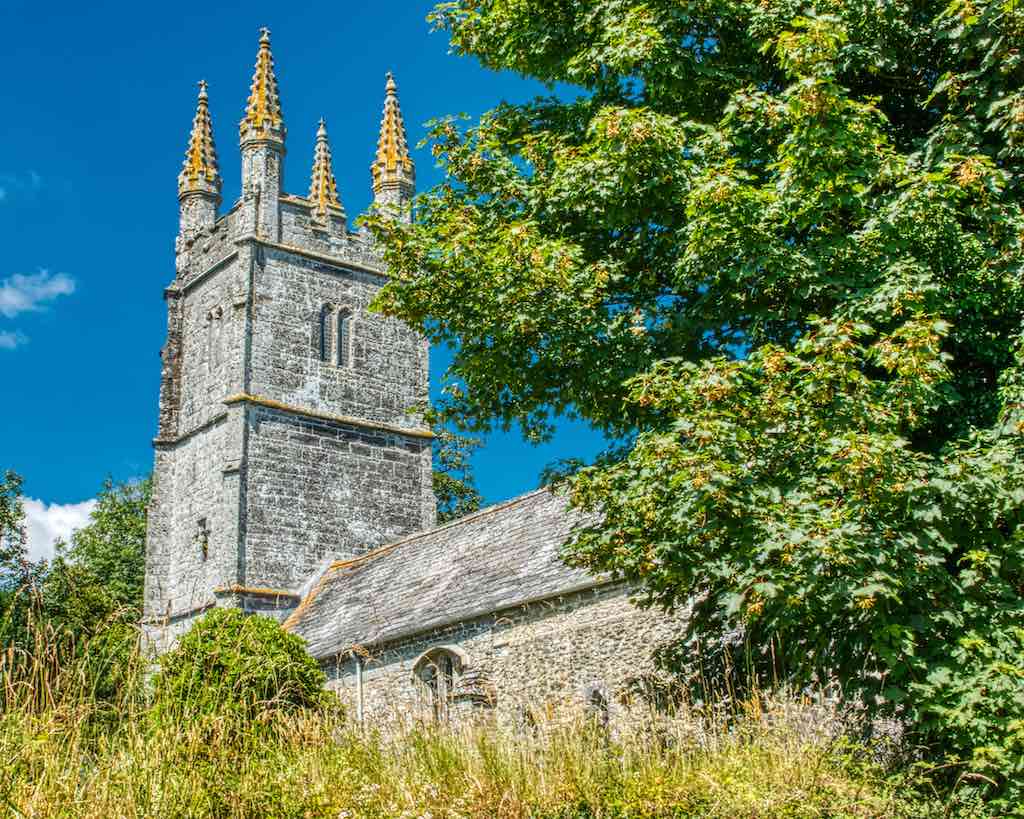 The fact that we know that the Saxon Ordgar lay sick here in 970 and freed ten slaves strongly suggests there was a church here before the Norman one.

Being the nearest church or chapel to that ancient Tamar crossing, this could have been a traditional place for a wayfarers’ chapel, Saxon if not Celtic, to give thanks for a safe crossing and pray for a safe journey. Fords and ferries were dangerous places over such a deep river, let alone some medieval scrote who saw somebody up to their waist in running water as easy prey.

The church is a bucolic beauty, a magnificent little mongrel with bits and pieces from the twelfth century onwards.

Now dedicated to St Nonna, a Celtic saint, the mother of St David the patron saint of Wales, this dedication was only recorded in the eighteenth century, before that we cannot be sure; many dedications were erased after the Reformation, it was considered a Papist practise, and when started again so many names had been forgotten.

But there is Altarnun in Cornwall, dedicated to St Nonna, so she is not a stranger to these shores.

The official explanation of Bradstone is Broad or Big stone, referring to a large stone, a possible megalith still visible down the road.

Speculatively, I do wonder whether Brad might be a Saxon corruption of Bride, St Brigid, one of the patron saints of Ireland, considering there are two churches nearby with ancient dedications to this saint.

The tower is from the 1400s, probably soon after the bridge was built, and it has a powerful west front covered in lichen and age. Just how the parishioners felt when they saw this is a thing to imagine, an awesome sight in this country depth when travelling to the next village was a major event.

The Norman door and Green Man

Then the south door, the entrance door in the porch, greets us with a resounding bang. On the outside is a Norman doorway from the 1100s, and inside that is a granite doorway from the 1400s and the door itself probably from a 1700s renovation, a marvellous mini-concatenation of styles and dates.

Interesting too to consider the choice of stones. The Norman choice was probably constrained by using local stone, but definitely going big and showy; the granite inner door uses a stone from further away, difficult to say how far exactly but likely about 10 miles, maybe two days journey by oxen along the tracks that existed then, taking into account that the stone was probably dragged on a sled, unless it arrived by river. Just as showy but using wealth instead of size.

Oxen were the working animal of choice until as late as the nineteenth century in many places, cheaper to keep, easier to look after, greater stamina and edible… talk about having your ox and eating it…

A very fine Green Man roofboss in the porch.

The whole porch was installed in the 1400s along with the ceiling and this powerful roof boss, popularly called a Green Man, a bald grotesque head with foliage coming out of their mouth and enveloping them.

Many used to claim that this symbol (though why a Green Man? Seems mighty sexist to me) has pre-Christian origins but without evidence. This specific style seems to have first appeared on the tomb of St Abre, daughter of Saint Hilaire of Poitiers in France, around 400 AD, but here it has evolved over a thousand years.

Caricatured heads and bodies usually indicated sinners in late Medieval times, and this here boss probably shows a sinner caught in the foliage of sin, sin moreover coming from the tongue (gossip, lies, nastiness… need I go on?), and enveloped by it; here, in the porch, it is reminder what to leave behind when we enter and what to avoid when we leave. Basically, just no, a big no.

The interior is bare, as churches preserved and cared for by The Churches Conservation Trust tend to be, and all the better for it; a sublime skeleton of stone and wood. The nave and chancel are likely the original Norman church, while the north aisle (on the left) is from the 1400s, with its granite pillars marching to the altars.

It can seem over-bare to some folk when they enter, almost nothing to see here, but give it a bit of time, look at the whole and not the details, and it starts to sing, beautifully so.

A Holy Water stoup from the previous Norman church or maybe going back to Saxon times.

But there are details too, and intoxicating ones too like this Holy Water stoup just inside the door, is this the original Saxon one? So simple, so utilitarian, but how many folk have dipped their fingers in and made the sign of the cross as symbol of renewed baptism? Sprinkled themselves to protect and divest themselves from evil?

To think it held such emotional power for so long… Stare hard, and it returns…

A Norman head, simple yet so expressive.

Here, on the south chancel wall, is another reminder of old cultures, this one a Norman head. Bearded, wearing a crown or coronet, with a few sweeps of the chisel the carver has created a powerful work of despair, of agony, of a life without the Divine. Some suggest this might have been a corbel, a stone for resting the roof timbers on, but I have seen similar, though not as good, on the outside of some Devon churches, kept over from the Norman times, visions of spiritual loneliness, those who choose to stay outside the faith…

This one could have been brought inside later, which I have also seen.

Up above are powerfully carved roofbosses, strong compositions and clear lines; these are not medieval, they are a little too sharp and a little too un-ornamented, almost classical in their way, and true enough one (unshown) has a date of 1718 on it, which would fit very well.
There was likely a church restoration around then.

Look closely at this simple design and its mastery will appear.

And stay awhile for this modest Victorian pew…

The inwardly curved top edge rising ever so slightly then changing its mind and curling around to meet the right side before dancing inwards, upwards, and around, the chamfered edges of the sides, the little Early English arch at the bottom, they way the chamfer stops just before it says hello to the ground, giving the impression that the sides pop out ever just so, cheekily implying ultra-steady feet as well as continuing the modest dynamism of the whole, the woodgrain (Douglas fir) that demands a caress or three…

Back to the twelfth century chancel and there is some more lovely woodwork, this time from 1925, now looking a bit dark owing to the damp and stained plaster but originally it would have gleamed and been well polished.

When I first saw it I was admittedly slightly put off by the state of it, and that is no criticism. The Churches Conservation Trust is doing a fine job with little money and a shedload of work.

But then I got closer and saw these…

Rhyming with the roofbosses yet still being modern, these carvings are better than good.

…and fell in love, head over the proverbial heels, the staring helplessly with a gormless grin kind of love…

They have a quality of mastery, of simplicity and power, they rhyme seamlessly with the roofbosses but have their own personality. It is difficult to put my finger exactly on the qualities that scream ‘mastery’ but they have that in spades. They just squeeze my heart in the most delicious of ways.

And then, a few months later, I discovered who they were by: Violet Pinwill; only one of the founders (along with her two sisters) and head of one of the top three woodcarving workshops in Devon of the nineteenth and twentieth centuries, working in the old Devon traditions. Oh, and the top three in Devon can give any other traditional workshop in the country a true run for their money…

But this is not her normal style, this is her adapting to the existing style of the roofbosses and riffing off those, with her own twist and a dab of 1920s style as well.

It is all very, very good

Light and shadows and shades of grey

Light and peace and time for silence.

Still entranced in the chancel, time-captured by the deep-splayed lancet windows, the light of the world bringing life to the dark, these babes go back to the twelfth century but really seem as ancient as the sun shine flickering off the plaster, shadowing blessings on the peace of the church.

The unsearchable abyss of peace, the ineffable sea of love
Syrian Clementine Liturgy

Grey on grey on grey, what a powerful tower arch.

Gazing down at the tower arch, this is certainly solid creation; look at the size of the blocks. Grey. Grey, grey grey. Not sure I know of another church quite as confident in its greyness. Probably a banker in a previous life… ?

That font too, oh my, another shade of grey, and this is certainly the first impression I had of the interior…

But give it a chance, because it is only a tad shy, and it will soon be happily sharing its treasures.

Outside though, the tower, lichen-gilded pinnacles and weathered granite, the belfry openings with pierced slate shutters, an unusual construction, and a certain slimness that really makes it stand out from the crowd… and that is before we even start on the turret carvings, slowly fading delicately back into the stone.

It is a wonderful church, in a little corner of Devon that is so seldom visited, very so out of time…

Hope you find it so.