Skip to content
Menu
Home / Blog / Pelican in her Piety

Pelican in her Piety

What is A Pelican in her Piety? 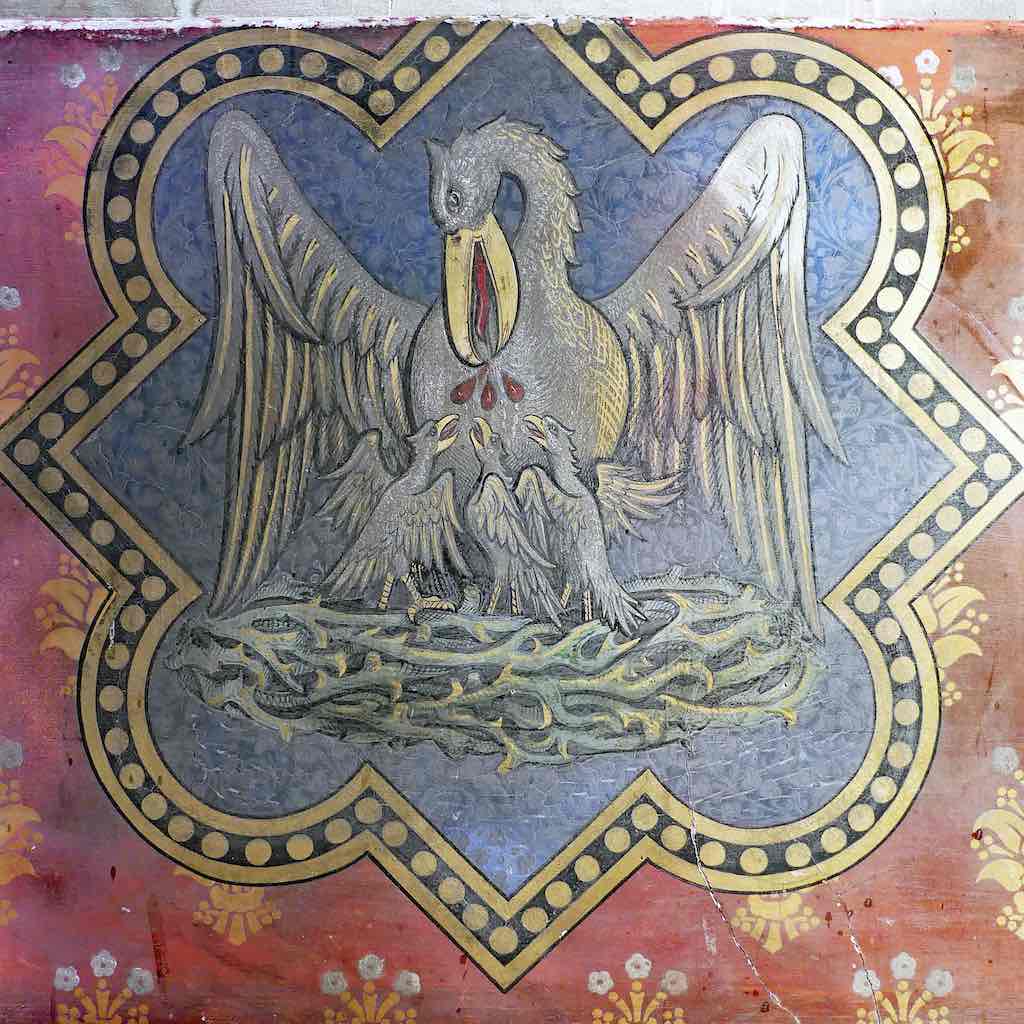 A Victorian Pelican in her Piety showing the pelican feeding her or his chicks with their own blood; Exeter, Wynards Chapel.

A Pelican in Her Piety is the image of a pelican feeding her chicks with her own blood by piercing her chest with her beak.

This was not a symbol. Folk thought that this behaviour was a real.

The history of the Pelican in her Piety

One scenario as to where this understanding came from is the following:

When a mother pelican feeds her chicks, she chews up fish in her big beak and lowers it to her chest to give the food to them. To distant observers this looked like she was pecking her own chest; the fact that some European pelicans have a crimson stain on their beak could have reinforced this idea of feeding her chicks with her own blood.

Ironically, in real life, the size of a pelican’s beak means that it is totally unable to stab its own chest.

So this bit of bird lore found its way into ‘Bestiaries’, which were Christian books about animals and their attributes, and how they reflected God in this world.

The earliest bestiary (the Physiologus) with the Pelican in her Piety story is from the second century, where the chicks are killed by their parents and then brought back to life

The little pelicans strike their parents, and the parents, striking back, kill them. But on the third day the mother pelican strikes and opens her side and pours blood over her dead young. In this way they are revivified and made well.
The Physiologus, author unknown, C2 AD

Sometimes, in later bestiaries, the mother was changed to the father, and sometimes the killing didn’t happen, just the feeding with a parent’s blood. Though to be honest the killing bit was pretty common.

But however the story was told, we can already glimpse how the pelicans’ behaviour reflected the work of God on earth.

What does the Pelican in her Piety image mean?

It is all about Christ, initially in two specific ways…

Just as pelicans offer their blood to nurture or even resurrect their brood, Christ sacrificed himself to nurture us and show us eternal life, a new life or a resurrection if you will.

We struck God by serving the creature rather than the Creator. Therefore He deigned to ascend the cross, and when His side was pierced, blood and water gushed forth unto our salvation and eternal life.
The Physiologus, author unknown, C2 AD

Nowadays some view this as symbolic, but back in the Medieval it was believed by nearly everybody in the Christian world that the wine and bread really transformed into the flesh and blood of Christ when sanctified during the daily Mass.

As a brief aside, this does not mean that folks are munching flesh or quaffing blood. That would be gross. It is a mystical thing, a spiritual practise and a deep mystery.

Not symbolic at all

The pelicans’ behaviour was not considered as ‘symbolic’, it was real behaviour and was yet another example of God revealing himself in all aspects of the world, something that was taken for granted back in the day.

So the pelican became identified with Christ, deeply so.

Thomas Aquinas and his use of the imagery

One of the most seriously famous Medieval theologians and intellectuals, Thomas Aquinas, used the imagery in a hymn he composed for the new Feast of the Body of Christ (Corpus Christi), that started in 1264.

Lord Jesus, Good Pelican,
Wash my filthiness and clean me with Your Blood,
One drop of which can free
The entire world of all its sins.
Thomas Aquinas (translated from the Latin) ‘Adoro te devote‘

The Corpus Christi feast was introduced partly because the real presence of Christ’s flesh and blood in the Eucharist (Transubstantiation) had just been made official by the Roman church in 1215.

Where was the Pelican image used?

It was such a popular image that it cropped up in churches and cathedrals all over. In Devon there are at least thirteen roofbosses with it from the sixteenth century, but it also appeared in stained glass, paintings, bench ends, misericords and various carvings in wood and stone all around Europe.

It was also used in coats of arms, jewellery and even pilgrim badges; its meaning also came to show general love, sacrifice and charity, with Christ of course as the perfect example.

The Pelican in her Piety in literature

Dante in his Divine Comedy here describes St John, traditionally the disciple who rested his head on Christ’s bosom during the Last Supper. He was also the one told to care for Christ’s mother Mary at the Crucifixion.

This is he, who lay
Upon the bosom of our Pelican:
This he, into whose keeping, from the Cross,
The mighty charge was given.
Dante The Divine Comedy (Paradiso). (The Cary Edition)

With, of course, the pelican being Christ.

Now Dante might reasonably be claimed to be writing for the well-educated poshos but Shakespeare made his living from us ordinary folk, and here in Hamlet he has Laertes use the imagery:

To his good friend thus wide, I’ll ope my arms / And, like the kind, life-rendering pelican / Repast them with my blood.

Which, in modern English, means

I’ll open my arms wide to his true friends, and like a mother pelican with her brood, I’ll even give my blood for them.
Hamlet Act 4 Scene 5 Modern English translation source: Sparknotes

And Shakespeare would so not have not used anything that was not immediately recognisable to us commoners; no posh boy he.

When the Victorians came along they revived the use of religious imagery and the Pelican in Her Piety was mighty popular; doubly so because it was so connected to the Mass and the reintroduction of the Mass as the most important part of worship was one of their missions.

So we see a lot of beautiful Victorian stained glass with the image, as well as paintings and some carving.

How did the faithful use the Pelican in her Piety?

Another 15th century pelican on a roof boss in Burrington church. Mid Devon.

The examples dotted around the churches were not part of a quiz show, as in ‘Oooh, I know the meaning of that one and that one, and that one’.

They were far, far more than that.

The meanings were clearly known, likely taught from a young age, and the faith was deeply emotional; contemplation on the unconditional love of Christ, the salvation of us sinners and the power of the Mass would likely have been common.

But not in isolation. Folk would likely have inspected their own sins, and seen the Pelican in Her Piety as the path to repentance, to getting in touch again with Christ when the temptations of the world had entranced them down paths that diverged from the Divine.

It was, and still is for many a folk, a powerful symbol that leads them deeper into the meaning of the Christian Way.