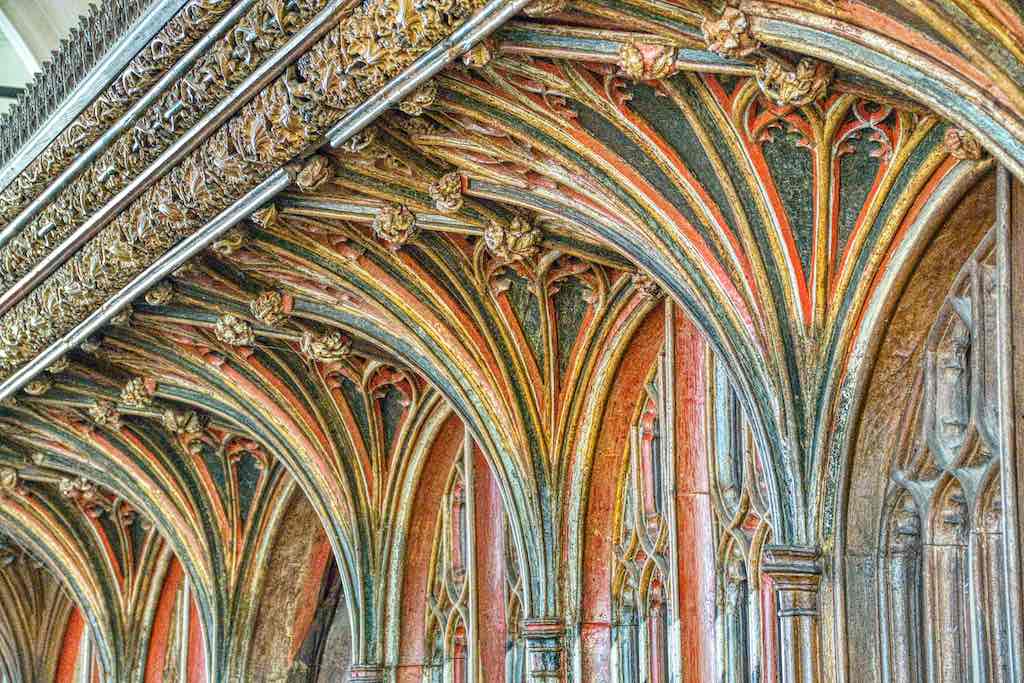 This pretty little town church was extensively renovated by the Victorians, and the outside shows this. It has a lot of Neo-Gothic touches, and looks wonderful in its flower-decked churchyard.

Inside is another matter, with various eras taking a bow.

The north arcade is early fourteenth century build from ancient Ham stone, and the southern one is fifteenth. Unusually there is an outer south aisle from the nineteenth century which copies the inner one.

The rood screen is a major star here, one of the earliest in Devon, probably before 1420. It is a wonder, still with its original colouring and stencilling, thick ribbed and deeply carved, and strong vaulting which used to support the rood loft.

The north chapel has a magnificence of carvings, both stone and wood. The altar has some very impressive late sixteenth renaissance style wood figures and foliage, probably brought from somewhere else and put together here.

The monuments of four generations of the Walrond family are just top-hole. All coloured, some in their original colouring, some more recent but still following the correct palette. The faces of the people are so very expressive, and the gorgeous caryatids on the tomb are just Devon to a T, farming lasses taking life by the horns.

Down the nave is the tower screen, which for my money is the best piece here, not least because it so unexpected. The sixteenth century figures are redolent of Polynesia and Asia, and show how far removed from us that era’s culture is.

The pulpit has a marvellous Flemish carving of the Ascension on it, again probably brought in and placed here at a later date.

The chancel is a grand Victorian creation in red, with a near psychedelic East window. Breathtaking.

Externally a striking church, with a very un-Devonian west steeple; the impact it makes is almost entirely the result of Hayward’s extensive restoration, extension, and large scale rebuilding of 1846-9.

The early C14 arcade is a comparative rarity in the county.

The rood screen is famous – the longest in Devon, but part of it is C19 – and a good example of early C15 work, ie. before the bulk of Devon screens were produced.