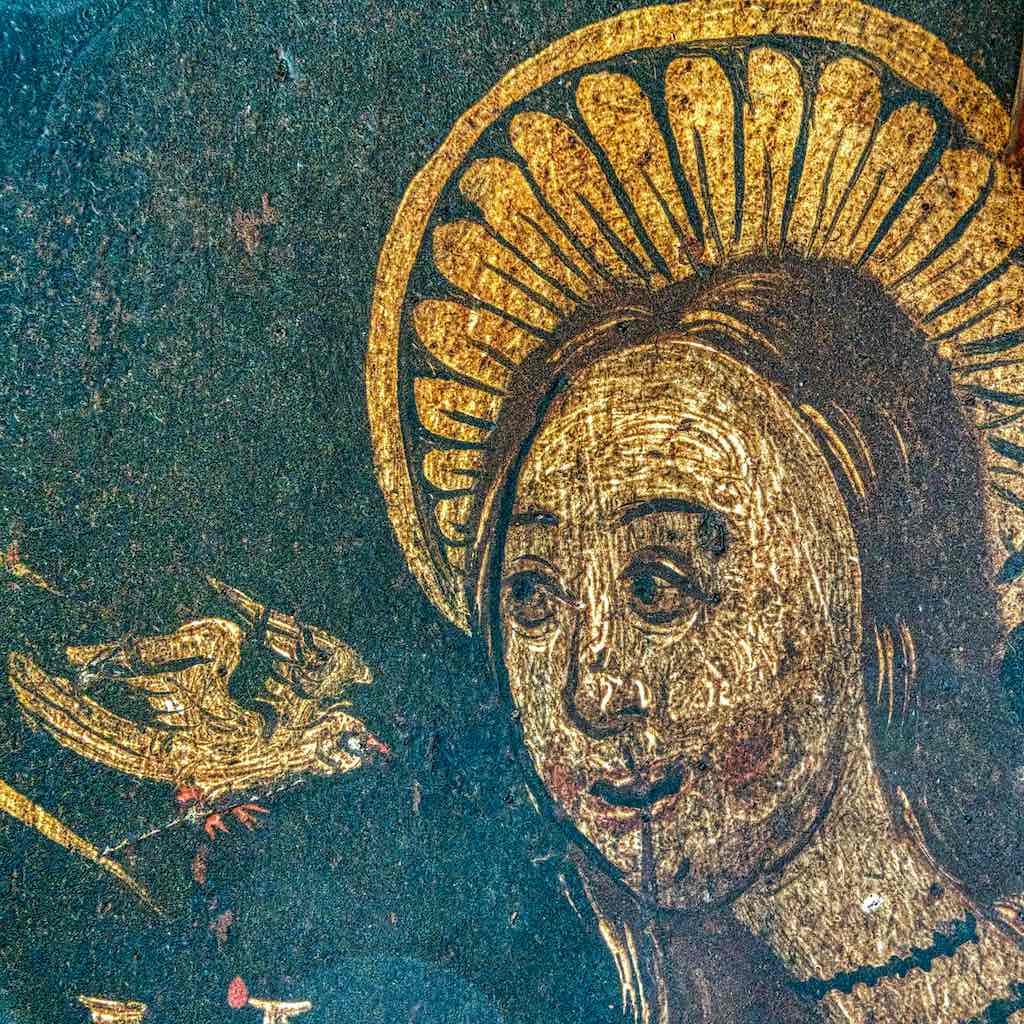 A beautiful position not far from Exeter, tucked away down a dead end lane, the glories of this church are stunning, especially considering its size. Yet another example of the quality of Devon’s churches.

The outside is a charming little church, with nicely coloured stone in a very pretty churchyard.

Above the south door is a Norman arch, with three carved heads, two nuns and a monk. A delight to find here.

Inside the remains of the rood screen are stunning, just two panels of wainscoting with painted figures on. The Annunciation on one is one of the best I have seen, not as technically accomplished as some but having a joy and vibrance missing from many. Really very, very good.

The other panel is by a different painter and shows the Visitation along with a couple of other saints. Very high quality, and would totally get my vote if the Annunciation hadn’t already invaded my heart.

The chancel itself is a fine example of early Victorian Neo-Gothic; great carving and exquisite lettering.

There is a sixteenth century Easter Sepulchre niche or maybe a monument, the debate is ongoing, in the chancel north wall. It is extraordinary. Quality Renaissance carving with a phenomenal sculpture of the Resurrection in the back wall.

A good medieval stained glass figure in the East Window, a fourteenth century alabaster carving of St Peter missing his head and a fine font and font cover all underline just how fascinating this church is.

Late Perpendicular style. The extent and character of the 1843 work makes it difficult to establish a dating sequence for the medieval period.

Of the C12 church a rounded arched doorway survives; the tower is probably late Perpendicular. The granite piers of the north arcade could be C14 Decorated but are more likely to be late Perpendicular, the rounded double chamfered arches of the arcade have been described as “restored”, but are similar to those at Exminster and Dunchideock.

The 1843 work involved extending the chancel to the east, re-roofing, replacing window tracery (mostly in original embrasures) and largely rebuilding the north aisle which was described as “ruinous” in 1843 (Davidson). The vestry was added, the chancel was refurbished, and the church reseated, it has been reseated subsequently in the C20.

The Hayward work of 1843 in a sympathetic Perpendicular style is substantial and the chancel fittings, glass and font are of especial interest.